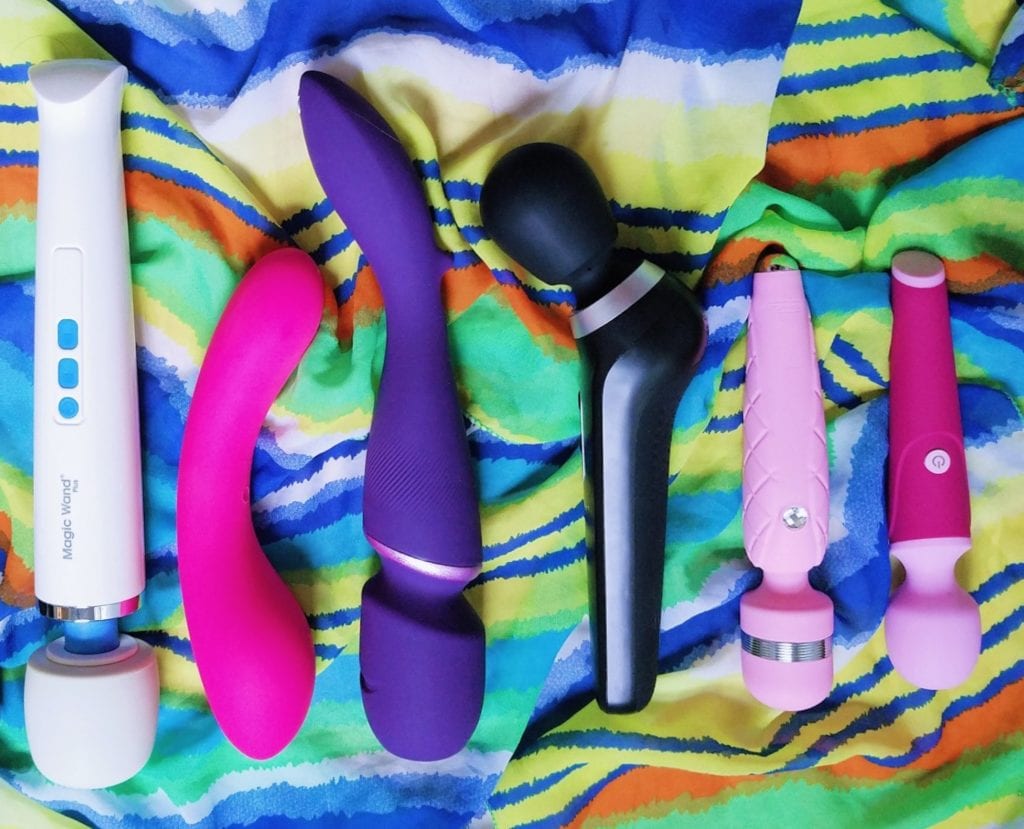 I love long and filling insertable pervertables, but sometimes, I want an intense wank without taking my pants off. Wand vibrators are perfect for that.

It’s ironic: less than two years ago, I wrote a blog post on why I enjoy the Eroscillator more than the Magic Wand Original. It cited reasons like the Eroscillator’s lower pitch, pinpoint stimulation, and the distinctly swiveling oscillation.

Wands have started to grow on me since then, but I’m still not a fan of the Magic Wand Original. Instead, my love goes to its successors, the Magic Wand Plus and Magic Wand Rechargeable. They’re superior to the Original, and among the best wand vibrators. These features are the reasons why:

Read on for a fast blast comparison to other rechargeable wands — some great, some “meh.” It rates them by the above criteria, along with price, settings included, control panel, water-resistance, and head size.

In this mini-review sampler... hide 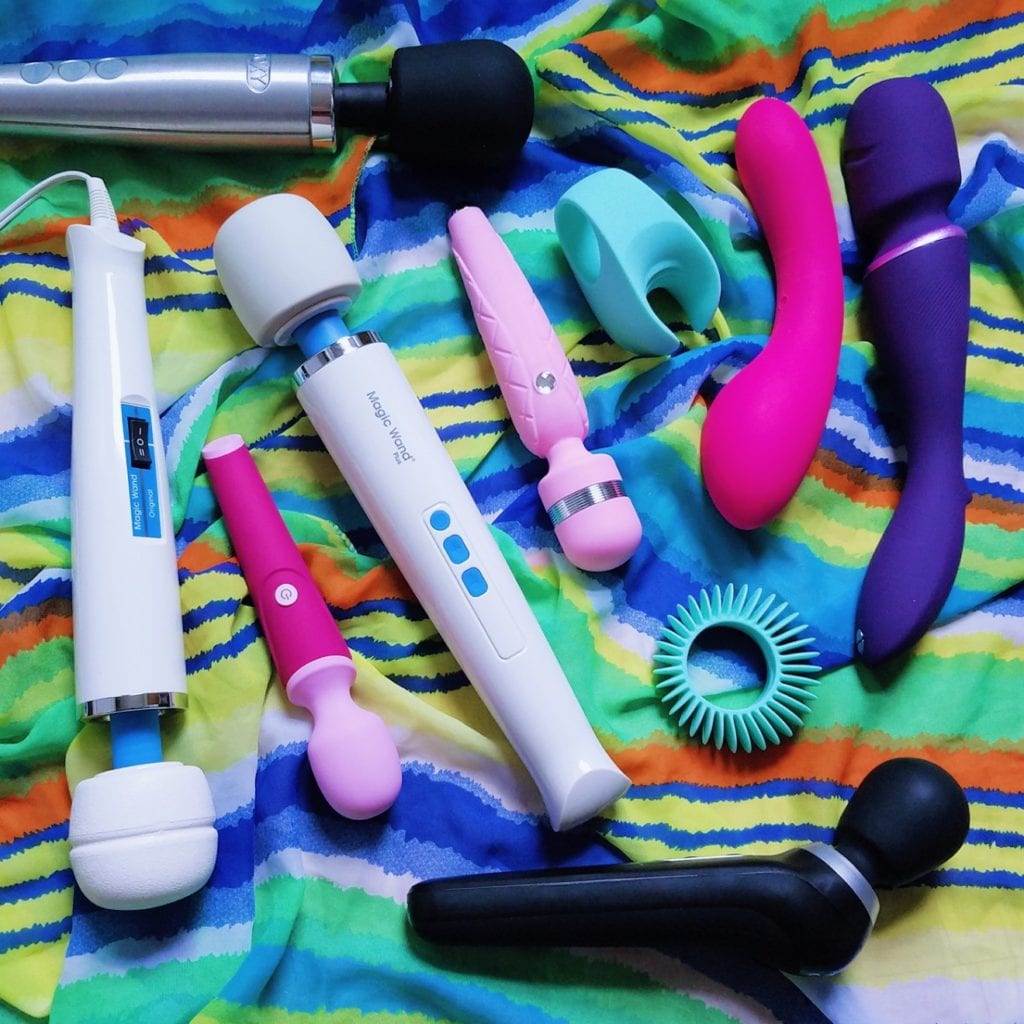 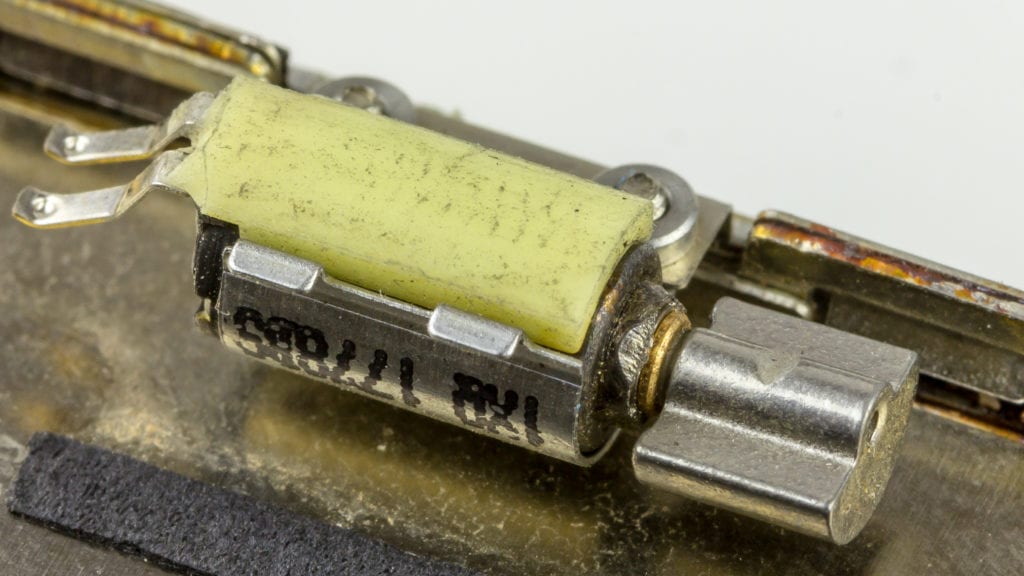 To me, the rumbliest vibrators are big on amplitude, or range of motion, and have a rich, low timbre on lower settings— some of which are sub-bass. 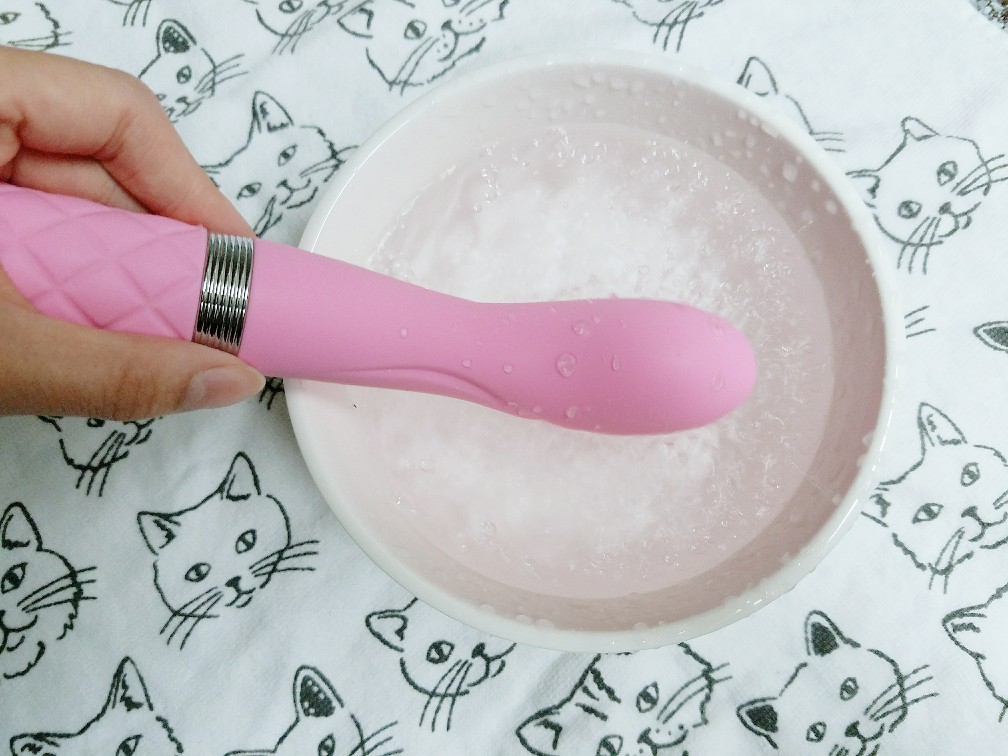 On the opposite end of the spectrum, buzzy vibrators are surface-level and rely more on speed for their power. Their quivering yields tiny ripples spaced closely together.

Where sex toy reviewers draw the line between the buzzy and rumbly is subjective, though.

It’s tough to talk about vibration intensity in objective terms.

Some things to keep in mind when reading the table 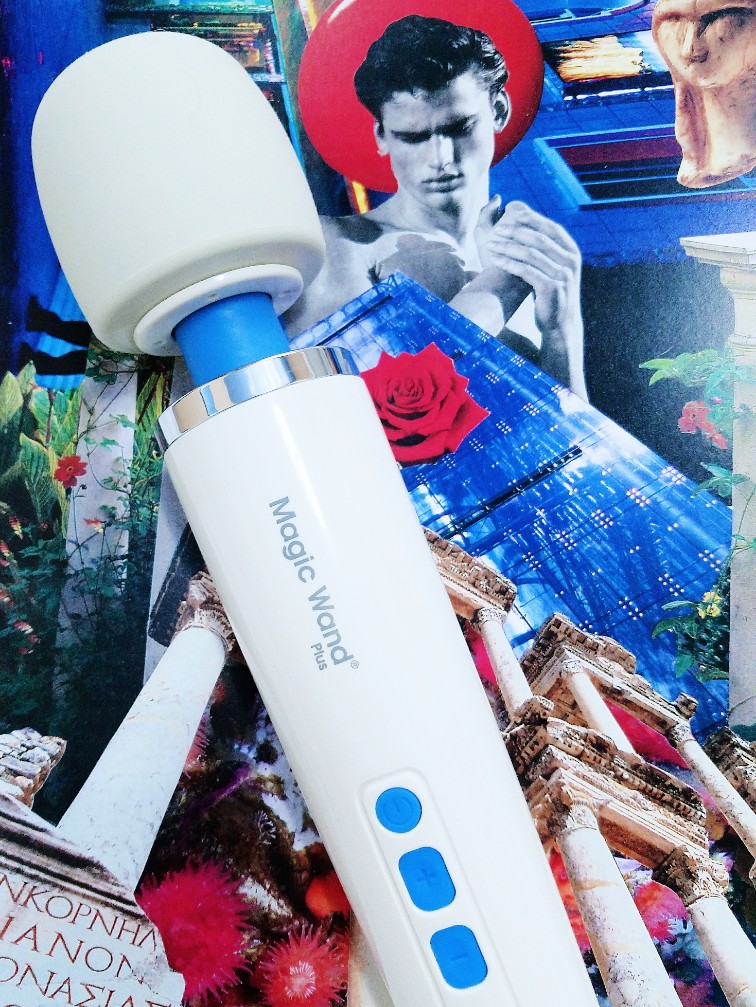 Their shared three-button control panel increases and decreases speed quickly. Even the second speed, at around 63 Hz (3800 RPM), is still rumbly and not especially loud.

I say “around” because the Magic Wand Rechargeable is a little heavier to accommodate the battery. Thus, its vibrations don’t feel exactly as sharp as the Magic Wand Plus‘s.1

And sure, the Doxy Die Cast, which plugs into the wall, is more potent on its higher settings. The Magic Wands “only” go up to 6300RPM (105 Hz) and the Doxy 9000 RPM (150 Hz), but the high frequency doesn’t make it better by my standards. I prefer low-speed, high-amp options, and the upgraded Magic Wands have that.

Comparison to other rechargeable wands 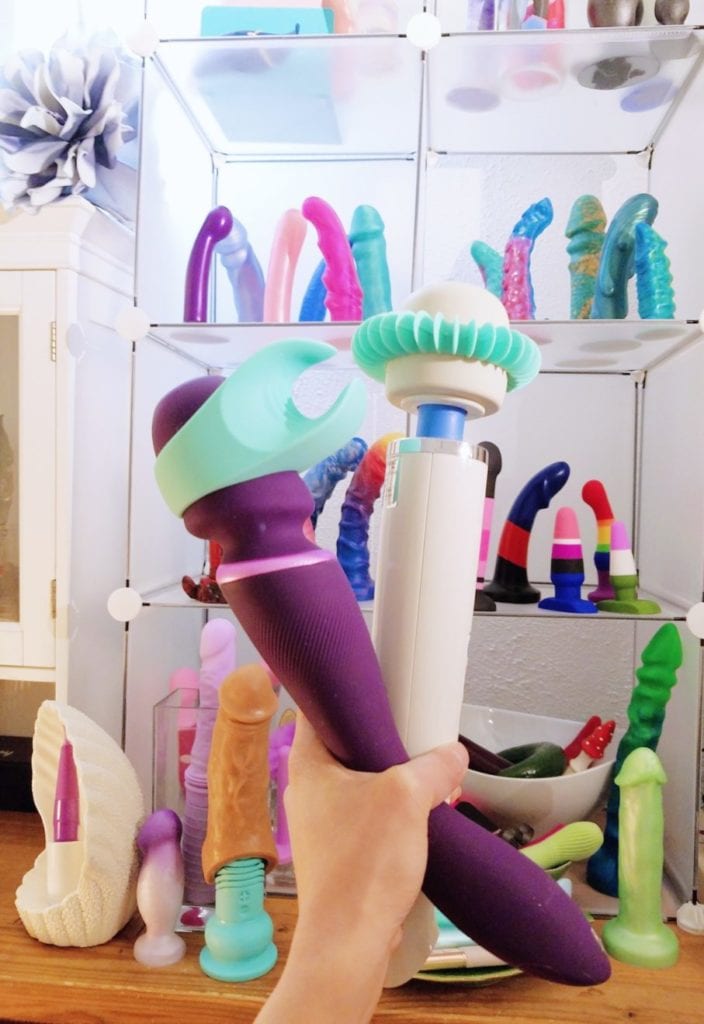 And We-Vibe’s wand features a lower-pitched purr with more precise speed control than the Magic Wand, but it’s not nearly as powerful. Its highest speed is somewhere between the upgraded Magic Wands’ first and second speed in strength.

As a bonus, since the Magic Wands are the most well-known “back massagers,” more attachments are made to accommodate them. That means you can combine powerful vibration with fluttering, G-spotting, textures, penis stroking, and more, without breaking the bank.

Most obviously, Magic Wands are power tools, and that’s okay— there’s no such thing as a perfect sex toy for everybody on every occasion. Sometimes, it’s too much for me, even with the new settings added. And there are big jumps in between, especially with the second and third speeds. 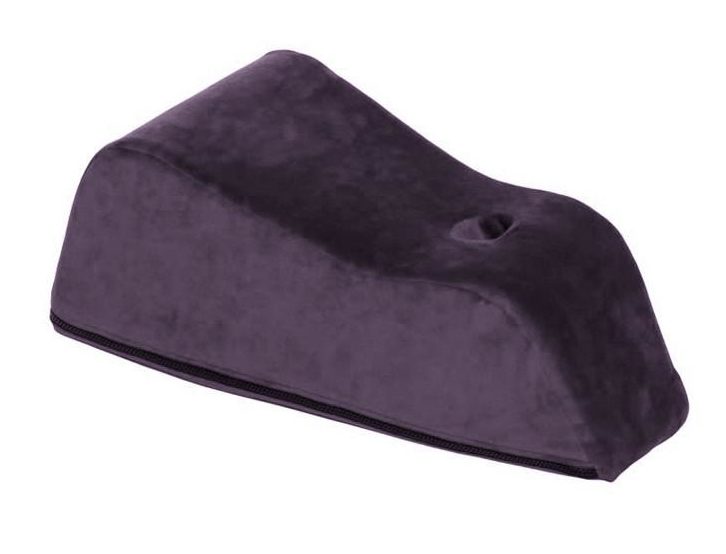 The Magic Wand Rechargeable is also bulky and heavy. If you have mobility issues, other wands may be more comfortable to hold. You could also consider getting a wand mount to straddle.

Other factors that might get in the way include its automatic shut-off and lack of water-resistance. Yeah, it turns off by itself after 20 consecutive minutes of use. It’s annoying, but you can immediately turn it back on.

Last but not least, it’s expensive, at around $125 regular price. If you’re on a budget, get the Magic Wand Plus. The Plus version is corded and doesn’t have pattern settings, but the price is $70, which is substantially lower than the Rechargeable. 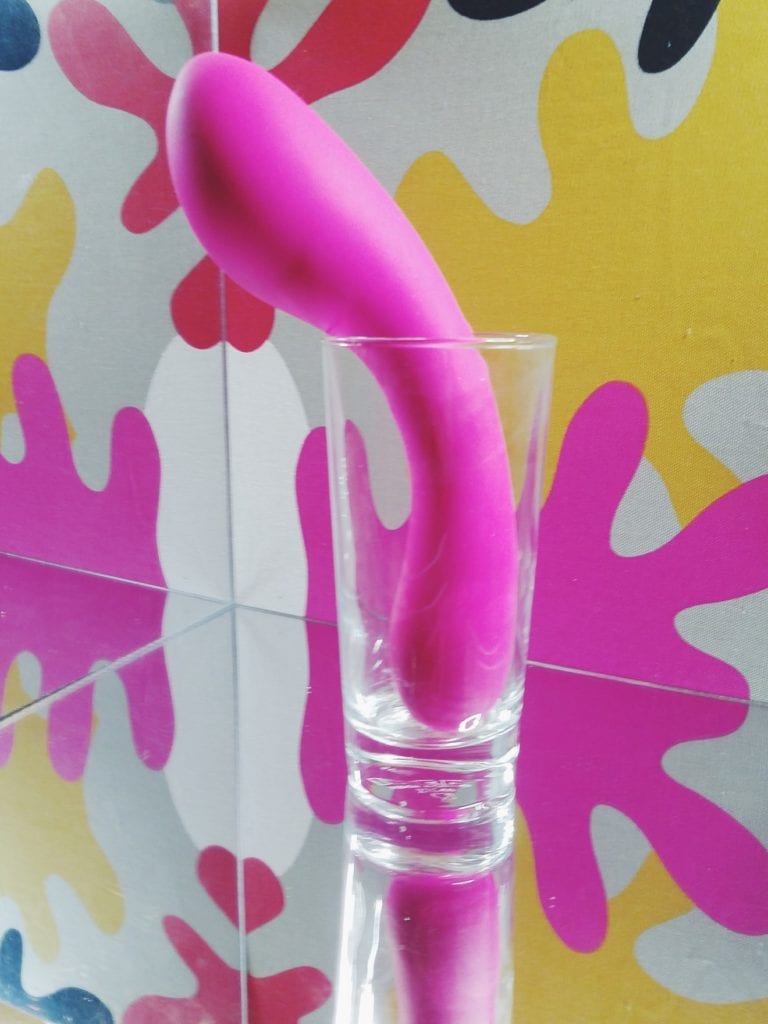 For those who crave a waterproof and G-spotty version of the Magic Wand to insert, the BMS Factory Swan Wand Classic is it. The vibrations start at a barely-audible 25 Hz (1500 RPM). It’s 2″ thick on its bigger end and 1.5″ on the other side.

Both heads have motors that you can independently control. And unlike the other wands on this list, the Swan Wand is explicitly designed for penetration. Its big head is tapered, with a front-loaded swell for kneading the front wall. It’s firm, filling, and leaves me starry-eyed and blissed-out. (Read my old BMS Swan Wand Classic review.)

Even when insertion isn’t involved, I love the two-button control on this thing. Press one button to cycle through three steady speeds, up to 70 Hz (4200 RPM), and 4 patterns. Or for more in-between intensities, hold the button down while it slowly ramps up. You can turn on just one end, both, or (of course) neither. To turn the unit off, quickly press both buttons at the same time. 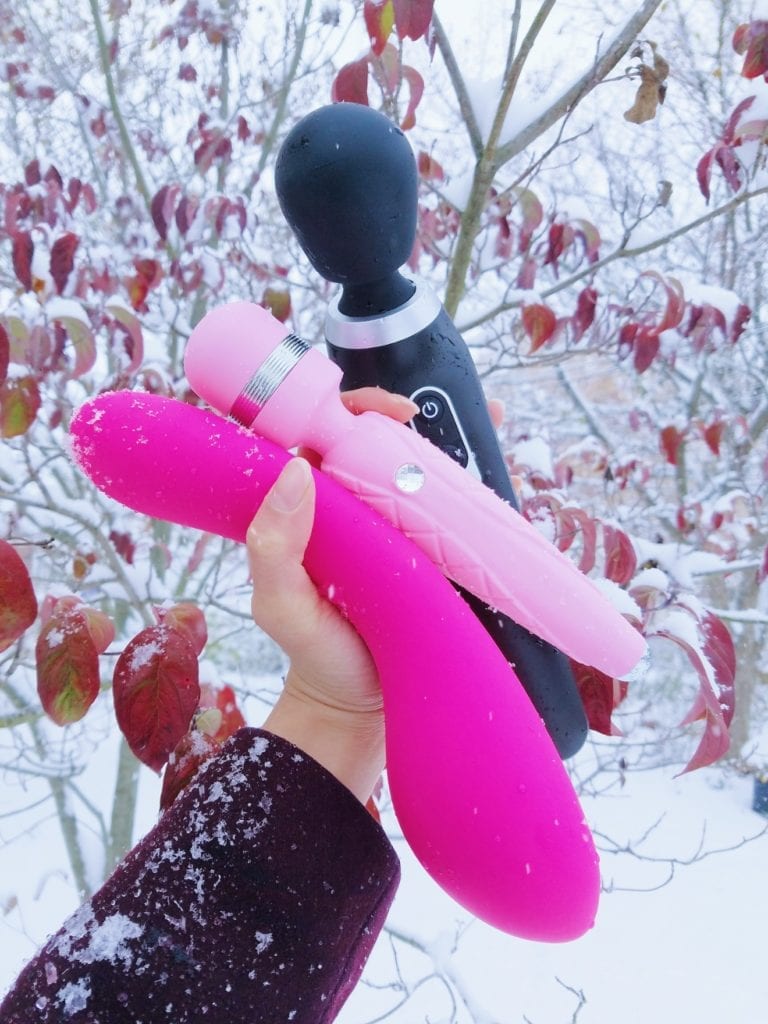 Again, its maximum intensity (70hz or 4200 RPM) is between the upgraded Magic Wand’s second (63 Hz or 3800 RPM) and third (90hz or 5400 RPM) speeds. But what makes the Swan Wand Classic stand out is that the weight inside — and therefore the rumble — is almost par with the Magic Wand Plus or Rechargeable. Its vibration quality is deeper than the PalmPower Extreme‘s, and its wide range starts with a beautiful, sub-bass purr.

The main thing that would make the Swan Wand even better is a way to decrease speed after orgasm, without turning it off entirely. I’d also love to see color options beyond pink. But setting those gripes aside, the Swan Wand Classic‘s PowerBullet™ vibrations are nice and thuddy, and its speed range is almost perfect for me. 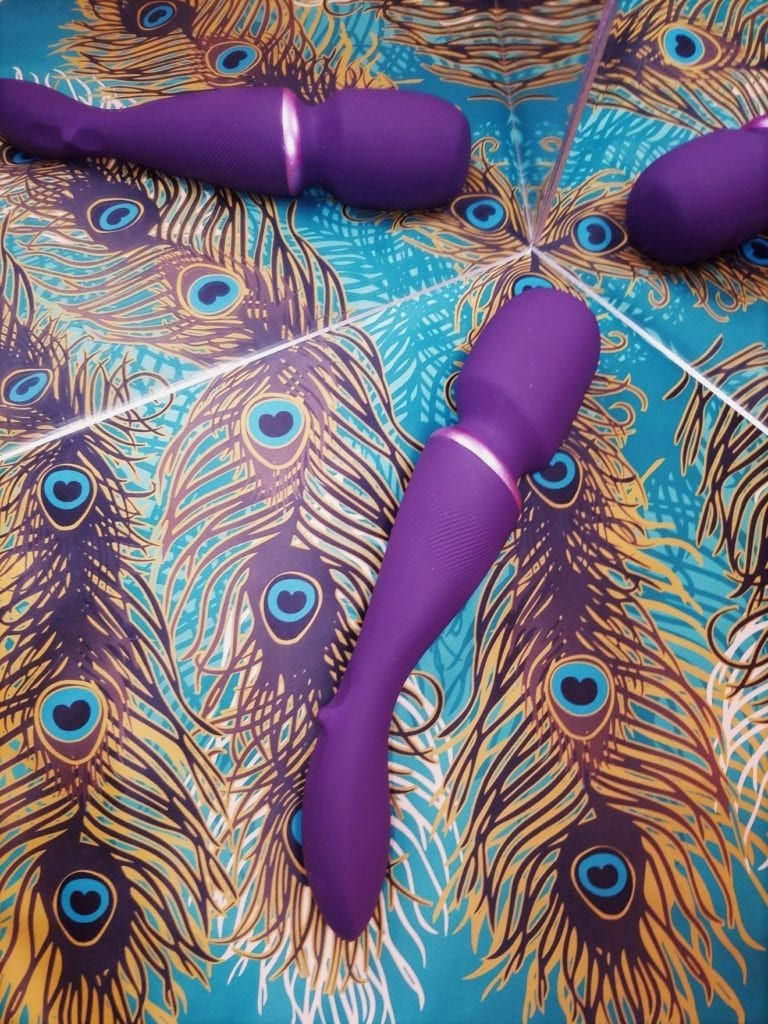 Like the BMS Factory Swan Wand, the We-Vibe Wand massager starts purring at 25 Hz (1500 RPM). It does go up a little higher in pitch, to 75 Hz (4500 RPM), but its weight isn’t as thuddy/intense. The We-Vibe Wand’s vibrations also aren’t neatly sinusoidal. There’s a tapping flutter to them, like a wobbling bass. If you’ve enjoyed Je Joue or Fun Factory’s vibrations, you’ll love the We-Vibe Wand.

Additionally, the We-Vibe Wand has Smart Silence™ technology for quick on/off. It vibrates when you press its head against your body, and stops when you back it away or let go of the handle. And it’s fully waterproof. If you have roommates or nosy parents, both of these features could be useful!

BUT IT’S SO EXPENSIVE, WTF! 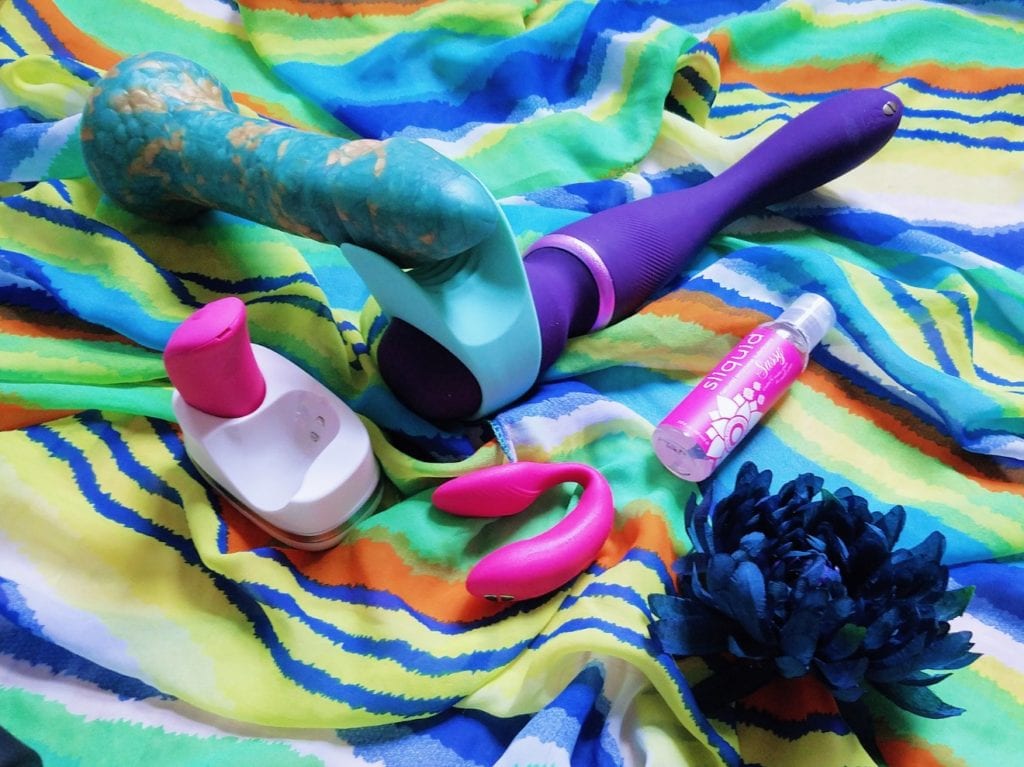 I get it: We-Vibe wanted to make a unique, innovative, and better wand. But for $179 at regular price, it’s substantially more costly than anything else on this list. Only you can decide whether the luxury features are worth it for you.

I do like that the We-Vibe Wand‘s controls are the absolute most comprehensive of any wand on this list. Vibratex’s Magic Wands have drastic jumps between speeds, especially the second and third. And the BMS Swan Wand has no “down” button; when using it, I can’t execute all of my tricks for longer and stronger orgasms. With the We-Vibe Wand, I can.

I don’t like that the We-Vibe Wand has to come with attachments, which probably drives up the cost of the kit. However, I happen to like the Stroker and Flutter. Your mileage may vary— many reviewers have WTFed at the Flutter attachment.

Get the We-Vibe Wand and take 10% off with coupon code SUPERSMASHCACHE. 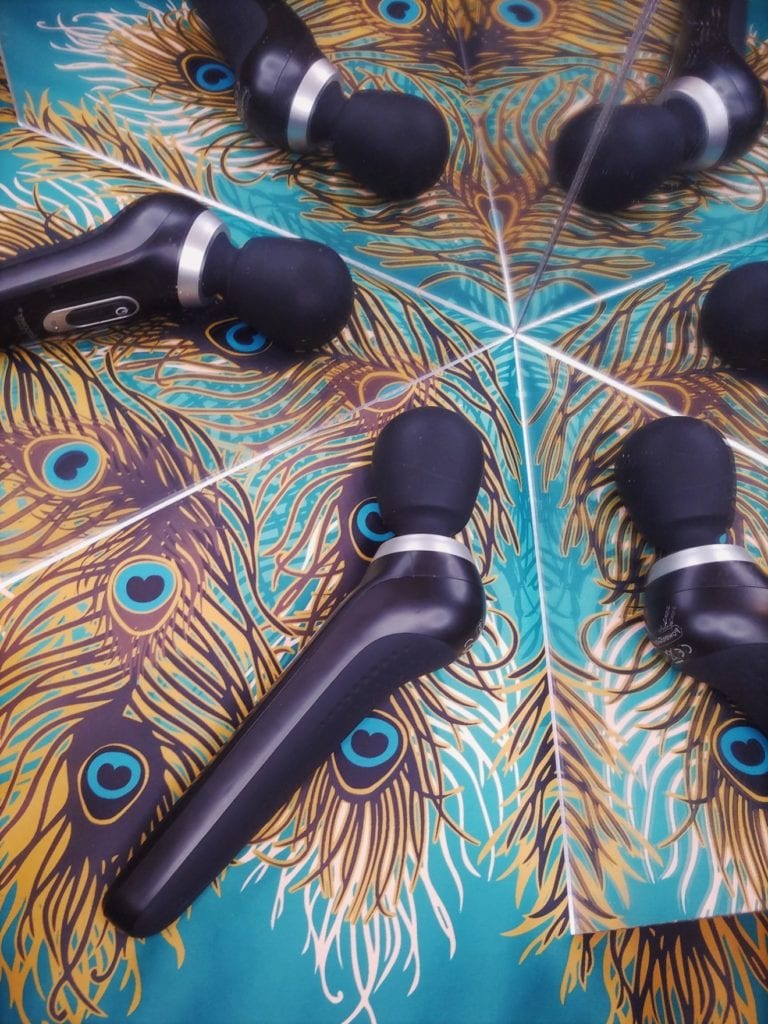 It’s still ridiculously strong by most sex toy reviewers’ standards, but it doesn’t have the same “VOOM.” Whereas the PalmPower Extreme’s speed range is 20–85 Hz, the full-sized Swan Wand’s is 20–70 Hz. I’m under the impression that the former’s higher speeds are compensatory. And understandably so. The PalmPower Extreme’s motor has to be smaller to fit in the 1.8″ diameter head, whereas the Swan Wand Classic is 2″ across.

If I tried the PalmPower Extreme in isolation, I probably would have praised it for many of the same things as the Swan Wand. They’re both intense, and their controls are similar:

These parallels make sense— they are made by the same company, after all. If there were more of a cost difference, I’d recommend the PalmPower Extreme in a heartbeat. But the Swan Wand Classic‘s price is a mere $10 more.

Reasons to use a mini-wand 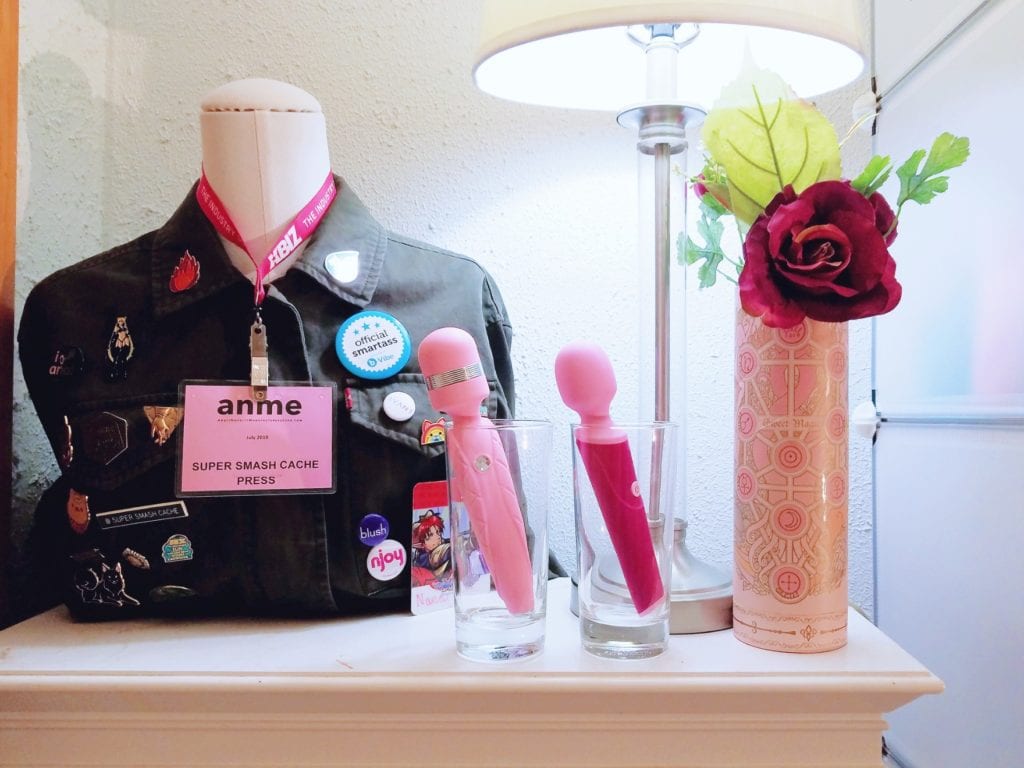 A good mini-wand isn’t as strong as the wands mentioned above, but it’s powerful enough to matter. 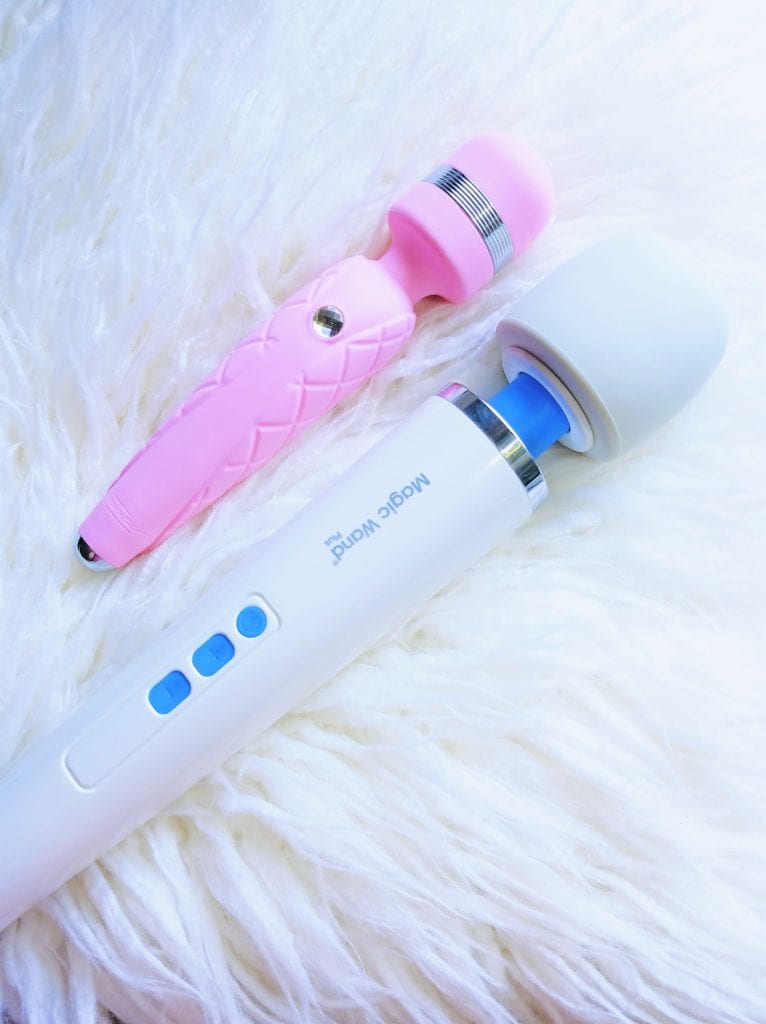 I described the Pillow Talk Cheeky’s lowest speed as “purring” in the full review. It’s not as low-pitched as the previous vibrators in this list, but still thoroughly respectable. For me, the Pillow Talk Cheeky and Sassy are at a sweet spot. Small and focused enough to get me off quickly. Amply rumbly for the size. And certainly worth every penny.

Pssst! If you want to take 20% off the Pillow Talk Sassy, use my exclusive discount code, SUPERSASSY20 at Peepshow Toys. The SUPERSMASHCACHE code works for practically everything else, including the Cheeky. 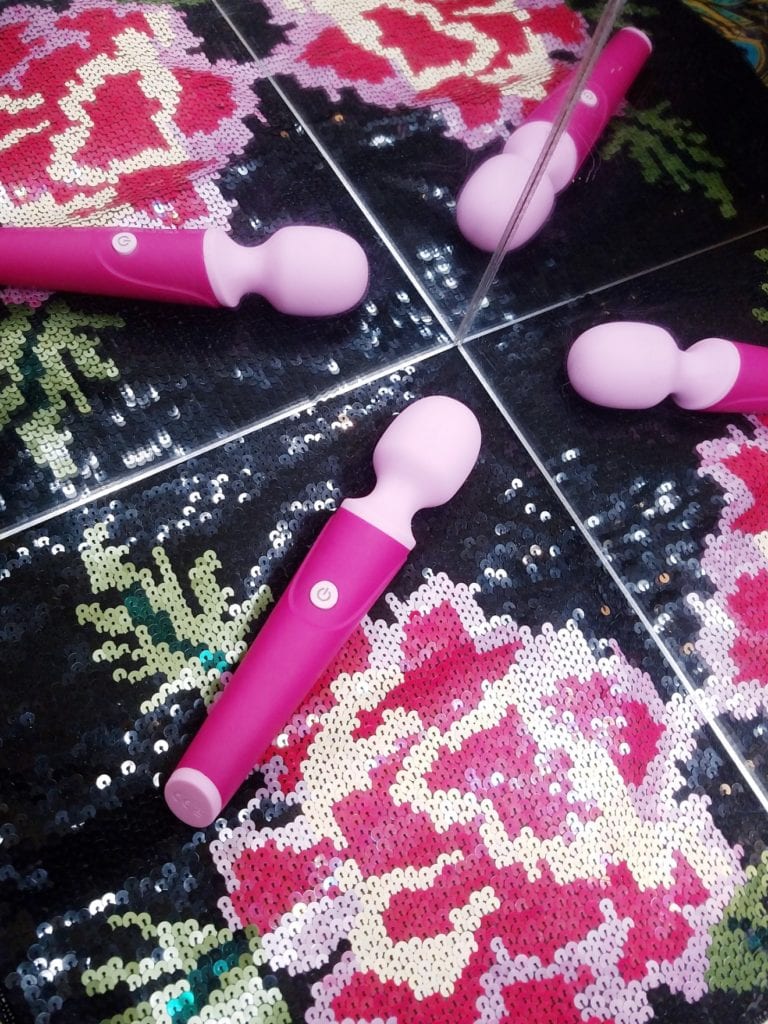 Last up is the Nöje W4 Wand. I called it “zingy” because it’s not weak nor surface-level for me, but it is higher-pitched than the others on the list. The Blush Nöje W4’s frequency range is between 70 and 90. Its vibrations feel sharper, with less buzzy bite than the LELO Mona 2, but less rumbly than the Pillow Talk Sassy. For $50, it’s a little wand with a tiny price tag and big impact. I just wish it had more speed settings. 2 speeds and 8 patterns? No. Just no. The Blush Novelties Nöje W4 Wand could have been so much more user-friendly. 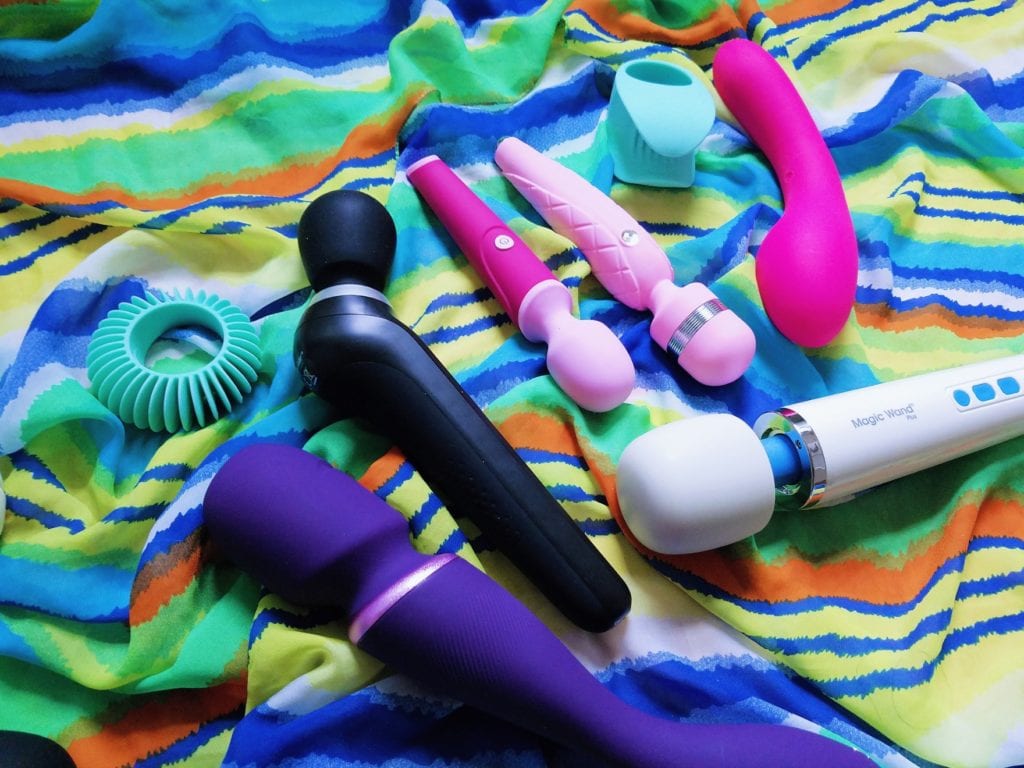 We-Vibe’s Wand is less powerful, but its pitch is delightfully deep. Using the joystick or We-Connect app allows users to turn the vibration speed up and down a continuous range— a feature sorely lacking in other vibrators. But it’s expensive, so a critical consideration is whether you’ll use the silicone wand attachments that come with it.

Finally, as far as compact, convenient, and affordable mini-wands go, the BMS Factory Pillow Talk Cheeky is my top pick.

Use my discount codes for 10% off

You can also use discount code SUPER at Spectrum Boutique, which will also give you 10% off!