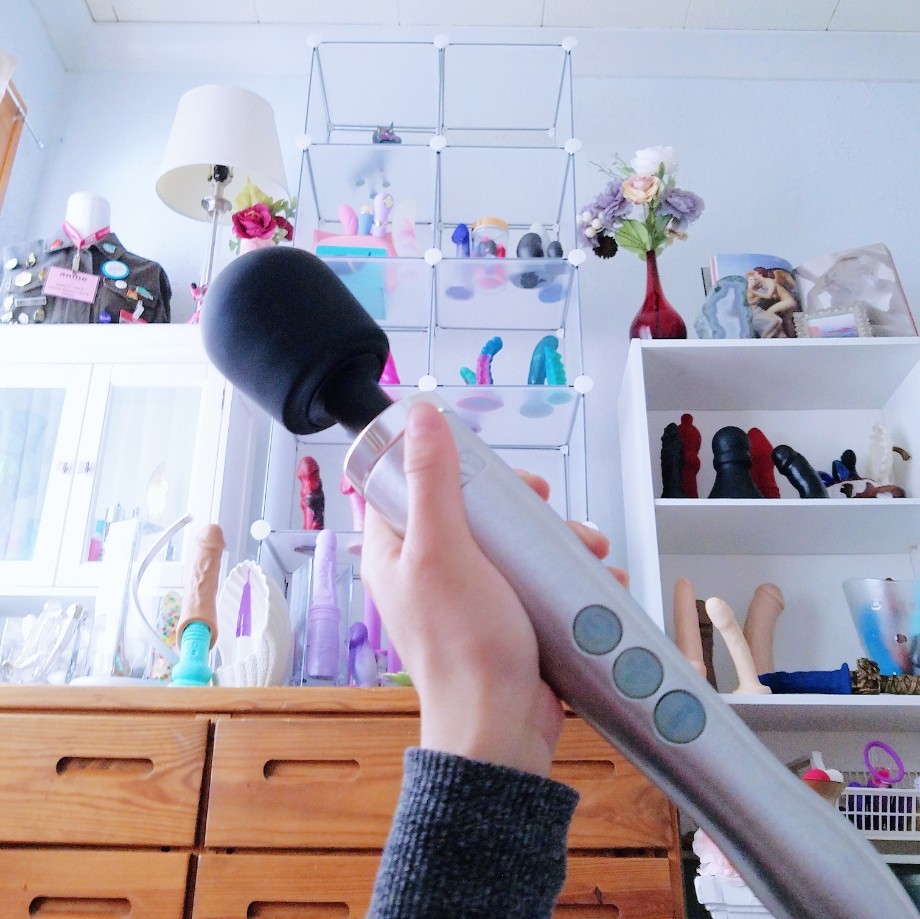 When I orgasm with the Doxy Die Cast, my pelvic floor has one primary objective: DESTROY. Crush anything that might be inside my vagina.

If you’ve heard me grunting when lifting weights, you’ve heard a sampling of what I sound like with my Doxy Die Cast. It’s the most enthralling workout-turned-exorcism, leaving me breathless. There’s pumping iron, and then there’s wielding the Doxy’s metal alloy body.

The plateau phase is pure bliss. It feels like any time I’m riding the wave is the right time to die — like a perfect moment to have a flux of DMT and celestial out-of-body visions. How many octaves do you think I could scream and gasp, “God” and “fuck” over and over again? THIS IS WHAT IT MEANS TO BE ALIVE.

I don’t know if I can go back to any other wand massager!

In this Doxy Die Cast review 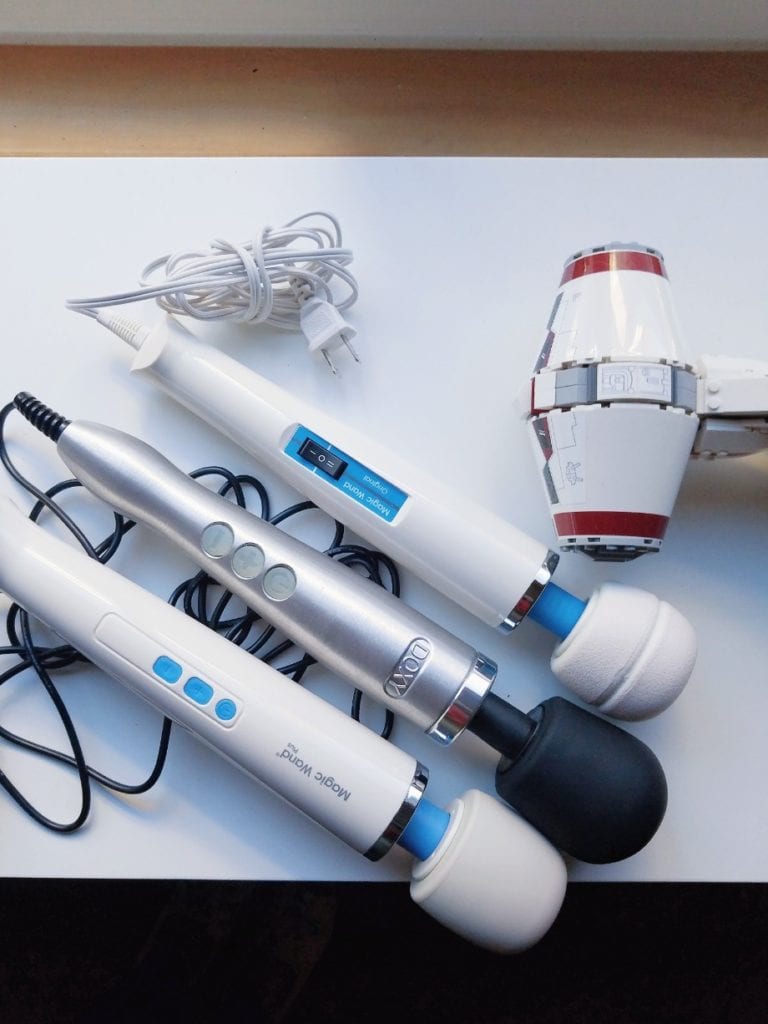 The Doxy Die Cast’s six intensities, in contrast, range from “OMFG!” to “EXCUSE ME WHILE I EXTRACT MY SOUL FROM MY BODY?!?¿?!”

When I hold my Doxy’s head in my hand, the vibrations travel up to my bicep, even on the first setting. Yes, it’s as uncomfortable as it sounds. I don’t recommend doing that.

The Magic Wand Plus’s only go a little up my forearm, once the wands are turned up to comparable frequencies. I’m super scrawny, so take that with a pinch of salt. 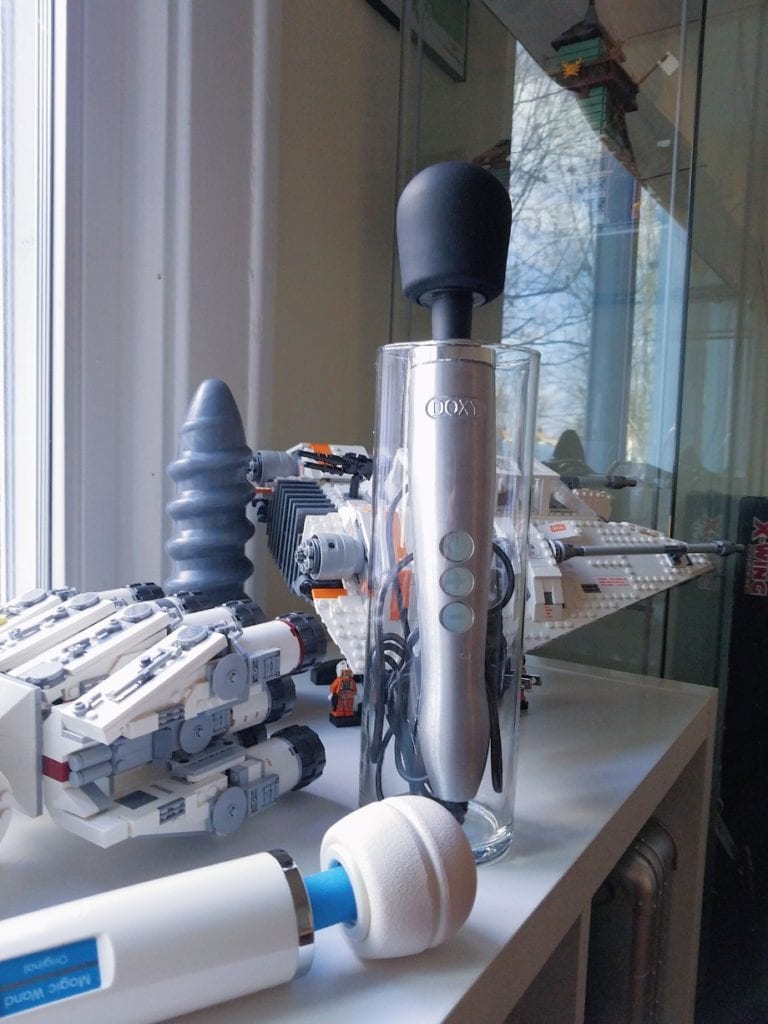 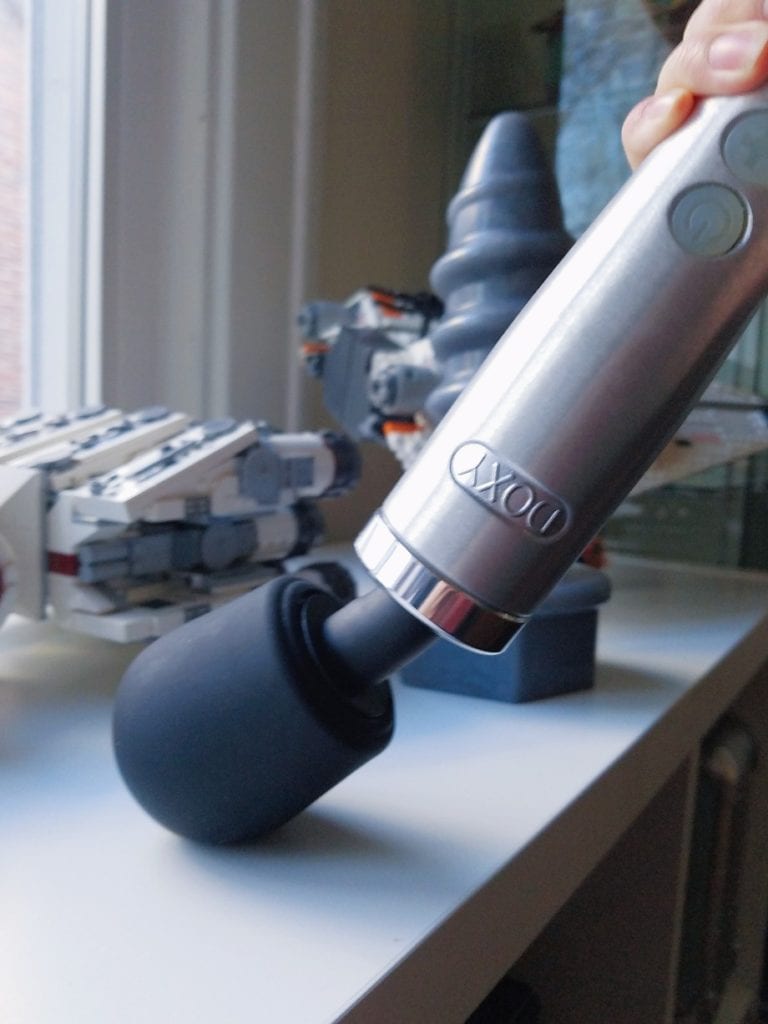 With the Doxy Die Cast, this irritation doesn’t happen anywhere near as quickly nor as often. I always come quickly — nearly instantly— when using the Doxy. Always, always, always.

With the Magic Wand Original, I can orgasm, but usually resentfully. I don’t enjoy the journey, and the destination is fleeting. It’s sharp and biting, lacking refinement. I’m not exactly a fan if you couldn’t tell.

The Magic Wand Plus and Rechargeable feel more luxurious than their predecessor, but they still have nothing on the Doxy Die Cast.

That’s not to say that everyone should get a Doxy — far from it. I think of the three powerhouses in this review, the Magic Wand Plus (and its fraternal twin, the Magic Wand Rechargeable) is the most versatile. It’s plenty rumbly and has options for lower intensities than the others. For many people, that’s a good thing.

Not everyone wants to remotely feel like their wand massager could sand their clit off. I’m exaggerating, but you know what I mean. 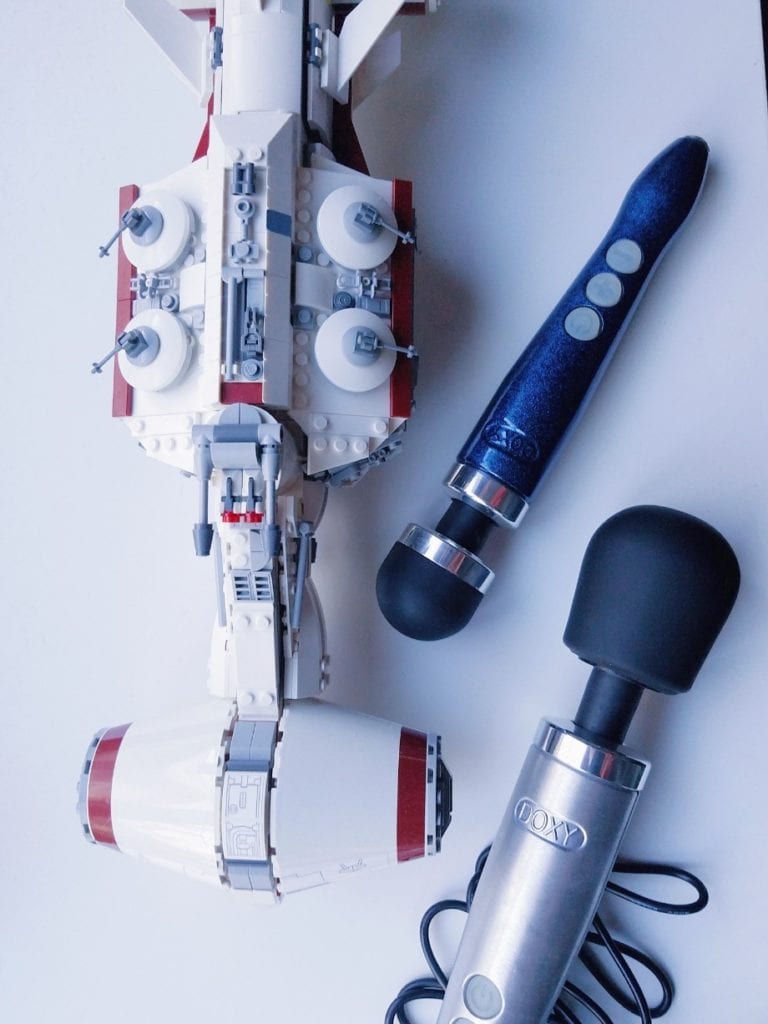 The Doxy Die Cast is a must-have if and only if you’re a diehard power queen. It does not have any subtlety. If you want something less hardcore and more compact, the Doxy Number 3 and 3R (rechargeable) are also fantastic options.

Difference between Doxy Die Cast and Doxy 3 Rechargeable in use

At first glance, it doesn’t seem like there should be much difference between the Doxy Smol and Doxy Lorge Die Cast. In use, it’s a whole other ball game. 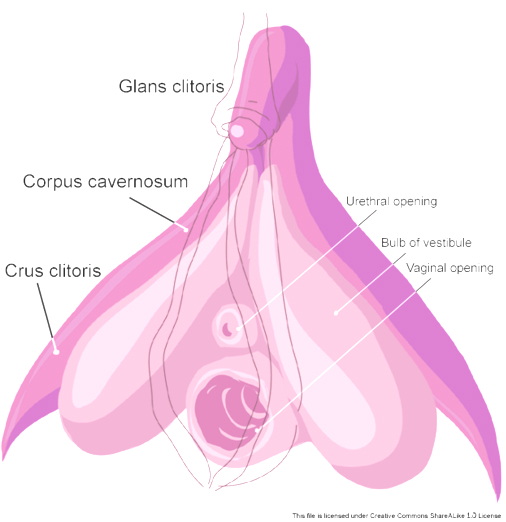 Which brings me to an interesting side effect of using the Doxy Die Cast wand often: it’s made my vulva more sensitive to stimulation. 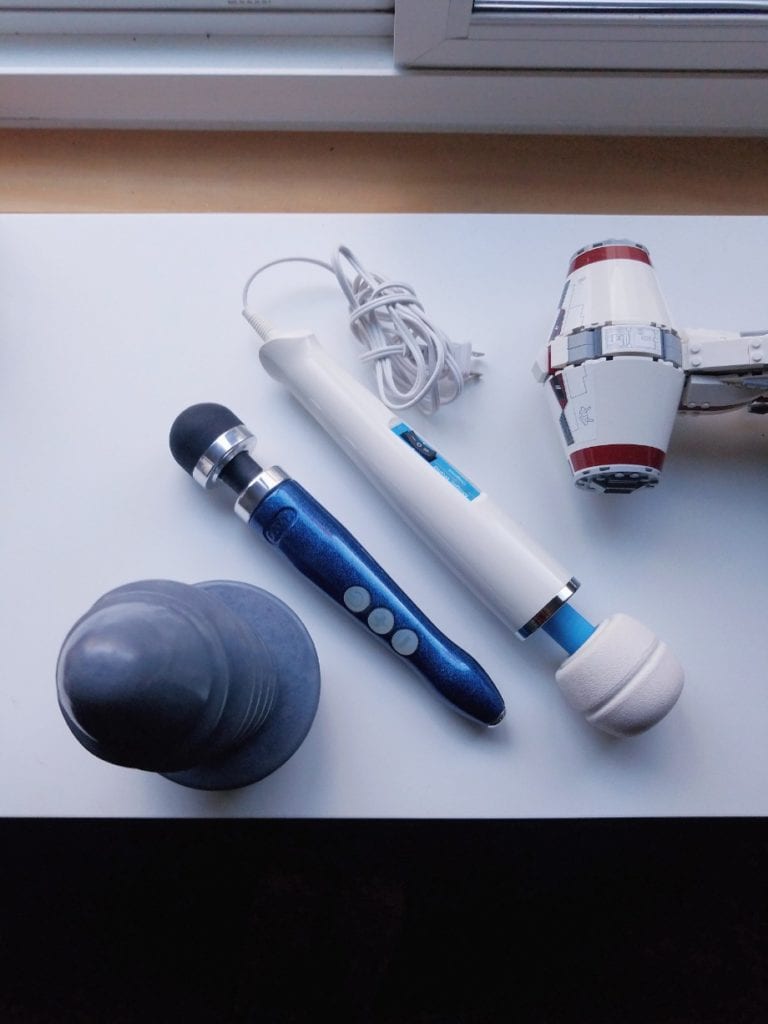 But also, the deep and rumbly vibration has made me hyper-aware of my clitoral crura’s precise positioning, wrapping along either side like a wishbone in my labia majora.

Usually, with the Magic Wand Plus, I push the head’s rounded “edge” against my glans — the external portion of the clitoris. With the Doxy Die Cast, though, I finally feel — not just understanding intellectually and saying, “I see where you’re coming from,” but fully experiencing — what diehard wand queens live for.

My whole vulva is shook, and my entire CUV complex is rattled. I get it now. I have seen the light.

It’s like the difference between reading romance novels and falling in love after you thought you had given up. 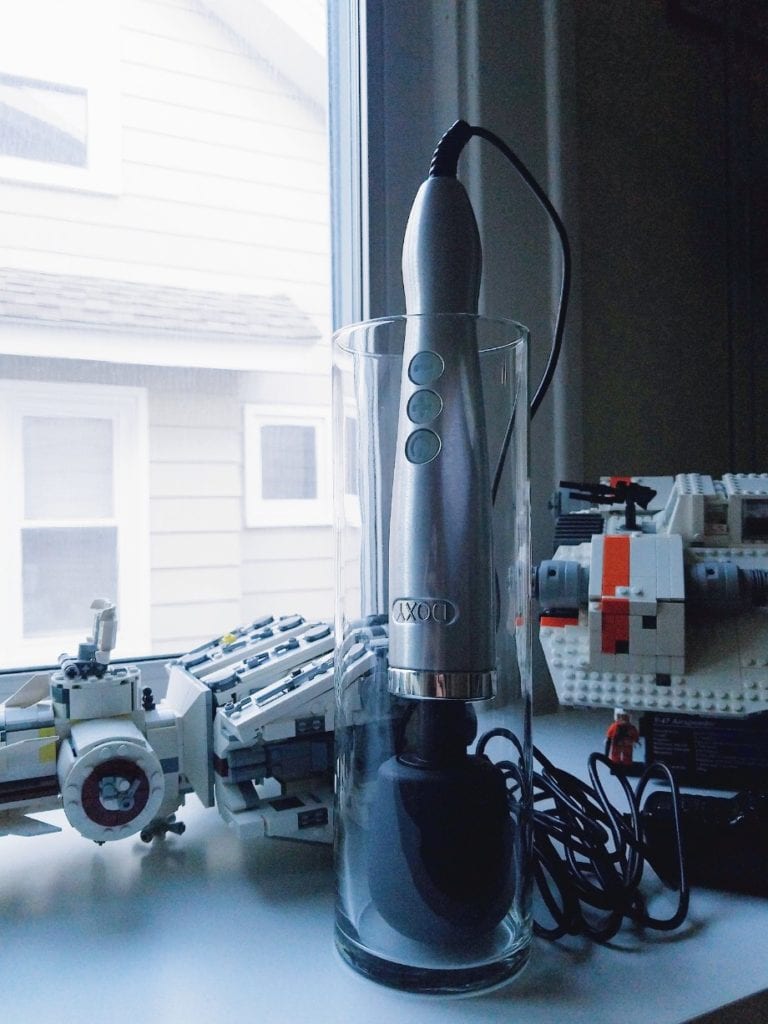 Don’t get me wrong — I still like pinpoint vibrators, like the Fun Factory Volta and Eroscillator. However, the Doxy Die Cast is the best of its broad-bodied class.

It’s my Pareto principle workhorse, nowadays used far more often than any other wand I have.

The combination of looking into his eyes and using the wand on my vulva can set my soul on fire. We’re social distancing in this pandemic, but the sheer ferocity of the experience brings us closer.

Once quarantine ends, though, you bet I’m using my Doxy Die Cast on his penis. Teasing him while he’s reading, or while I’m straddling with the massager against both of us at the same time — wands are more versatile than people give them credit for. 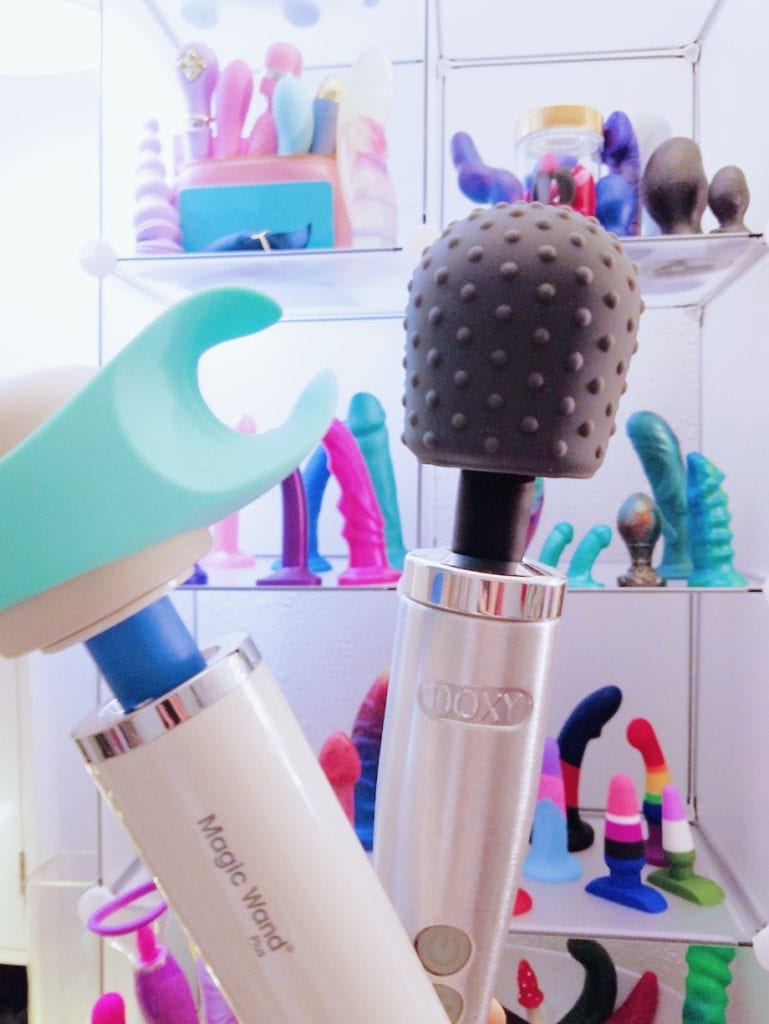 The Doxy Die Cast‘s 2.38″ diameter head is only a little bigger than the Magic Wands’ and classic Le Wand massagers‘. Thus, it’s compatible with the same attachments!

The buffer allows you to use a broader range of intensities. Or pop on a wand-compatible version of the LuzArte Jollet for stationary G-spot stimulation.

(Pictured is the Magic Wand Plus with the We-Vibe Wand stroker and a Le Wand dot textured cover on the Doxy Die Cast.)

The only downside to the Doxy Die Cast: its weight

Other great features of the Doxy Die Cast 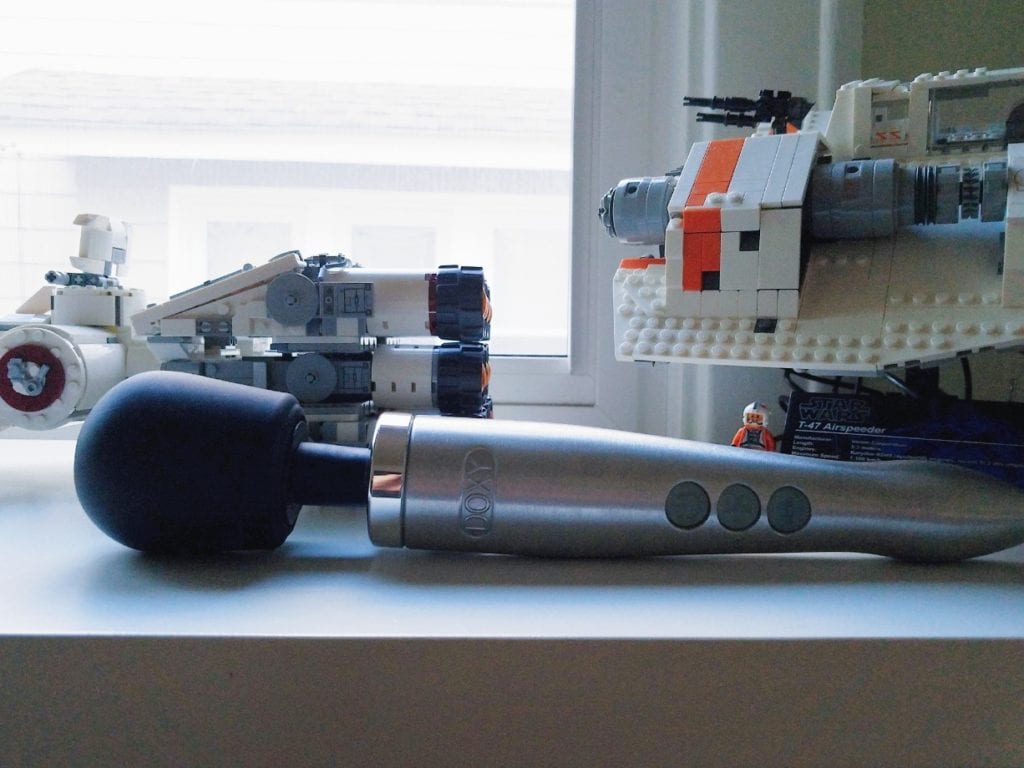 Once the aluminum and titanium heft is out of the equation, though, there are plenty of features that make the Doxy Die Cast easy to use.

For one, it has three big, soft buttons. If you struggle with grip, Doxy’s relaxed control panel design is far more comfortable to work with (than, say, the Magic Wand Plus or Le Wand). The translucent buttons also glow when turned on and feature distinctly engraved + and – signs for use in the dark.

As well, the Doxy Die Cast’s head is body-safe silicone, meaning that you can adequately sanitize it with bleach solution. Plenty of other wands also have silicone heads, but not the Magic Wand Original, original Doxy, or Bodywand.

I suggest putting an unlubricated condom or a reusable silicone cover on those. (If you don’t want texture, you can flip the ribbed or dotted caps inside out!)

My verdict on the Doxy Die Cast: FUCK YEAH! 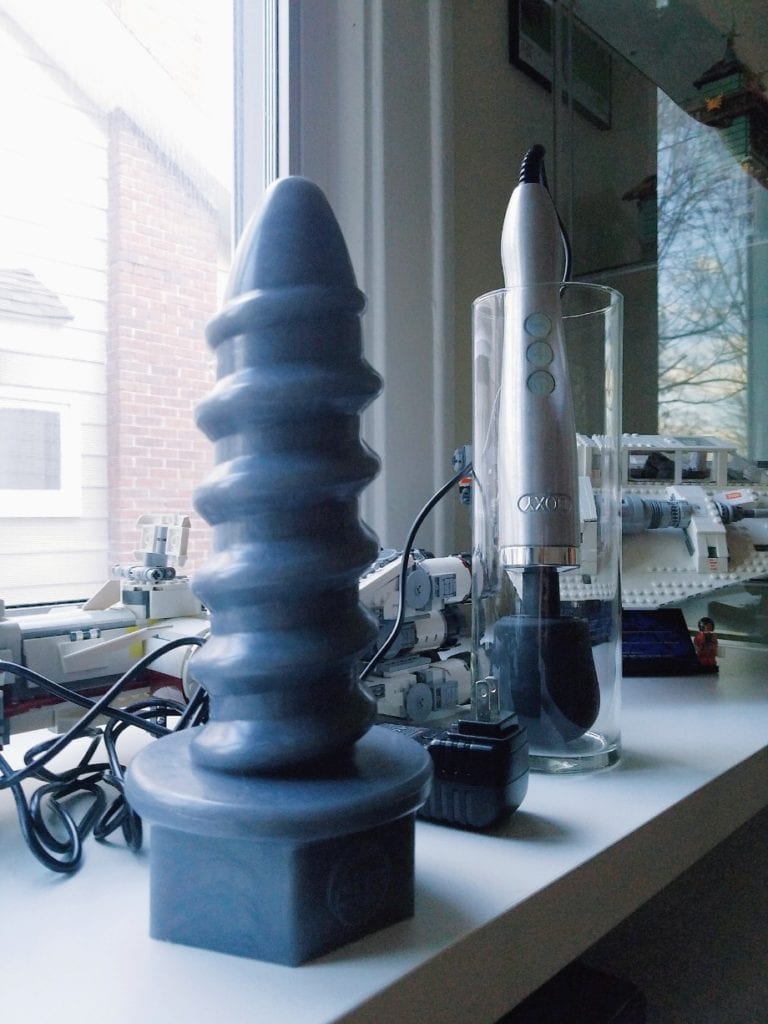 Yes, it’s heavy and expensive, but is anyone surprised that I love metal objects with massive impact?

When I die, I want to be buried with my njoy Eleven and Doxy Die Cast for sure. Both are beautiful and timeless. I’m ready to kill zombies during the apocalypse, and I’ll come back as a zombie prepared to kill anyone in my way.

I deeply respect the Magic Wand Plus, but it has been dethroned. Times have changed, and I can’t imagine any other wand topping the Doxy Die Cast. Some would argue that, since it’s on a tier all its own, it doesn’t need any more reviews, but disagree.

After I convert the Magic Wand fanatics, I can die happy. And I know they’ll die happy, too.

Get a Doxy Die Cast from Spectrum Boutique!

Take 10% off your whole order at Spectrum Boutique with my coupon code, SUPER 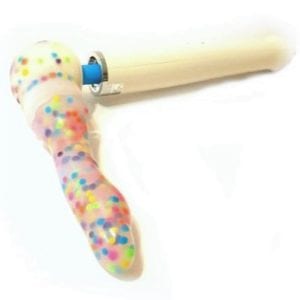