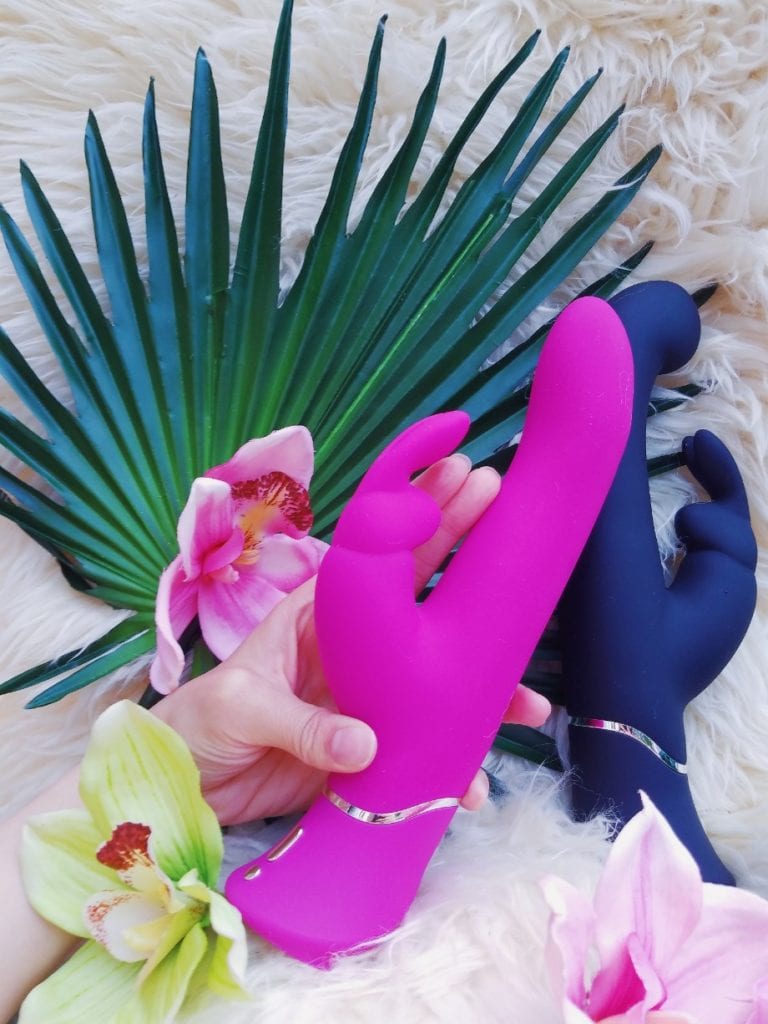 I didn’t imagine this day (nor myself) coming so soon with the Lovehoney Happy Rabbit Curve. But here we are, with one of the best things to happen in 2020.

Dual stimulators are highly anatomy-specific. The key to the Happy Rabbit Curve thrusting vibrator’s success, though, is that it has the right level of ambition. There’s nothing too fancy — just some tried-and-true features done right.

(Unfortunately, I can’t entirely say the same for the Happy Rabbit G-Spot Stroker. More on that, as well.)

Like the Fun Factory Stronics and many other thrusters, the Happy Rabbit Curve’s magnetic motor jostles back-and-forth. It doesn’t replicate Fun Factory’s pulsator power but comes closer than the Zalo Desire and Temptation and XR Brands Thump It. Lovehoney’s Happy Rabbit Curve has more heft and momentum than the other imitators, while still whisper-quiet. 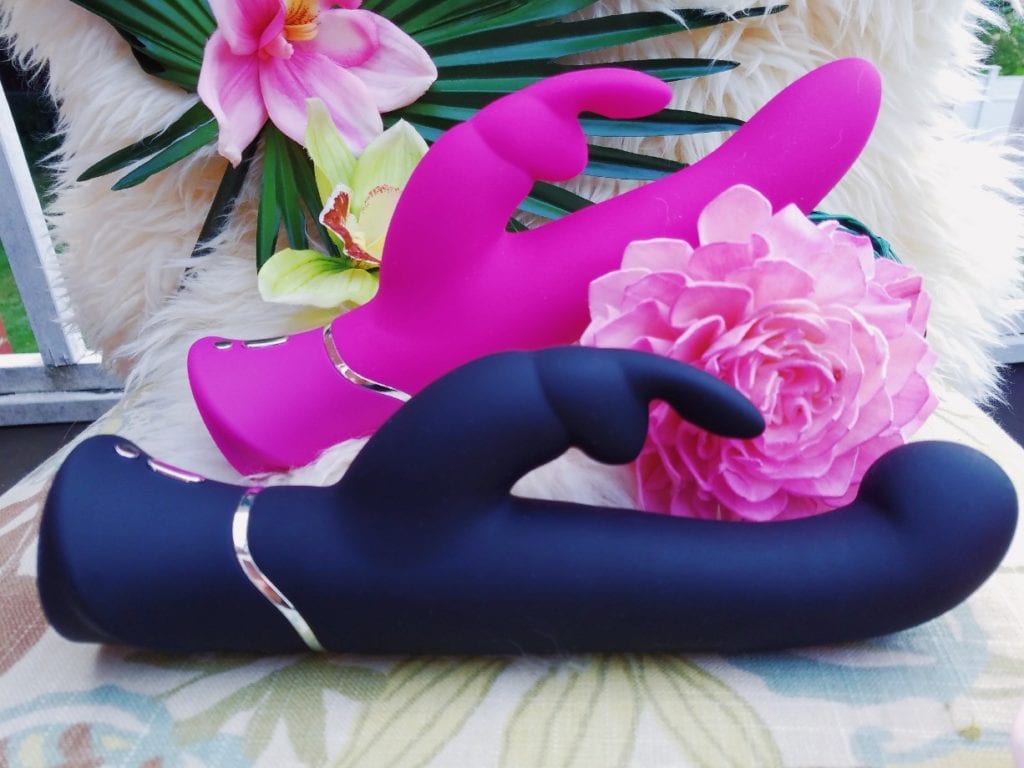 Speaking of rumbly, let’s talk about the external rabbit prong.

It’s very okay: deep in timbre, but not very strong. Think low pitch and moderate amplitude, like the kin of the Le Wand Chrome Deux.

Your mileage with the Lovehoney Happy Rabbits may vary.

What lines up with my anatomy won’t necessarily suit yours.

For reference, my clit-vag gap is average, at 1 inch. My G-spot, in contrast, is bulbous but shallower than online articles and toy designs might suggest. It’s hard to pinpoint because the G-spot isn’t an exact organ, but I’m sensitive about 1.5″ inside the vaginal canal. 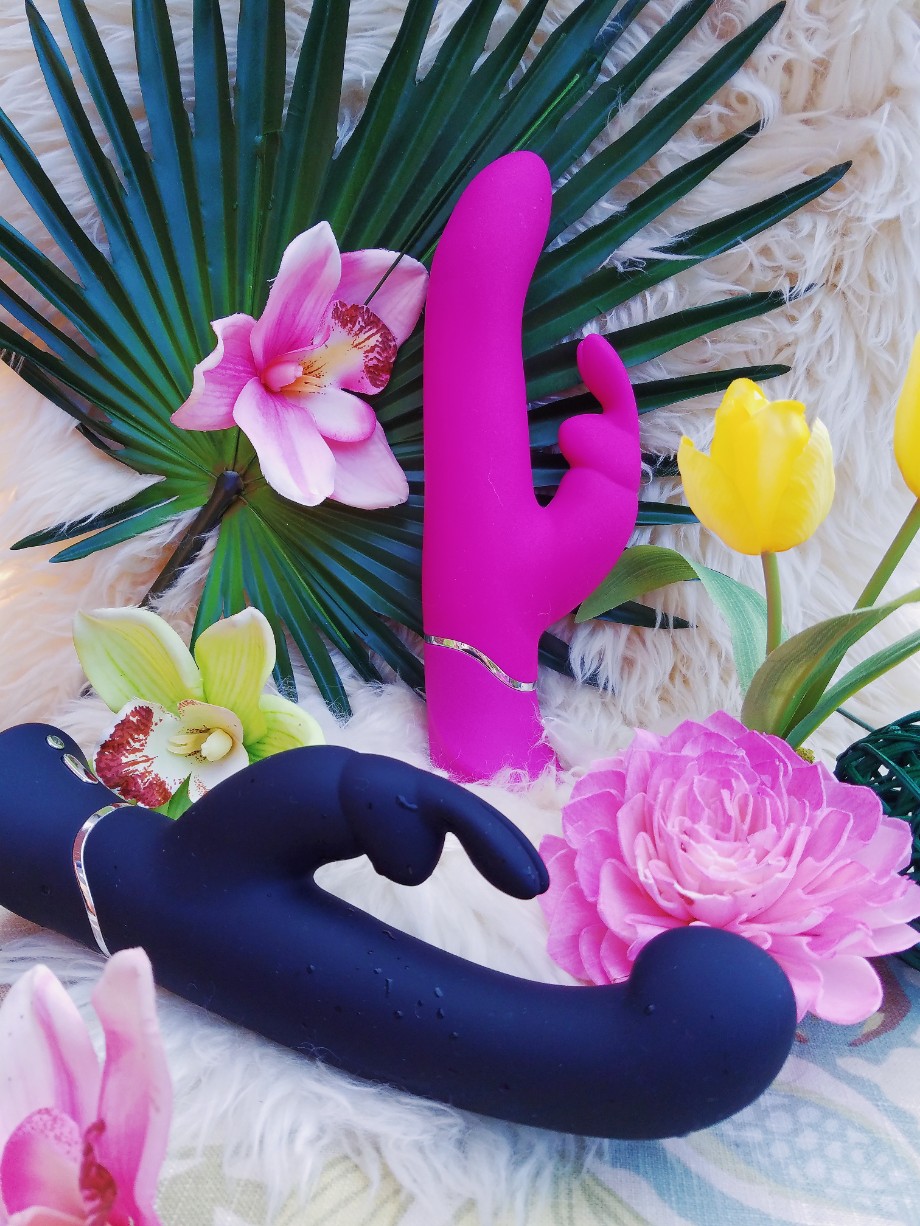 Why the Lovehoney Happy Rabbit G-Spot Stroker utterly fails me

For its external prong to touch my clit, I have to insert the bulbous head waaaayyy too far inside to do anything for my G-spot.

I also wish its “come hither” motion held up to my pelvic floor muscles. A major reason reason I don’t enjoy this rabbit is that my vagina grips the penetrating portion in place, while the handle wags outside of me. Do not want.

My expectations for the Lovehoney Happy Rabbit G-Spot Stroker were way too high, despite trying similar toys in the past.

Other key characteristics of the Lovehoney Happy Rabbit clitoral stimulators

As for the Happy Rabbit line‘s external stimulators, I was pleasantly surprised! The rabbit’s body is only a little flexible — overall, a nice balance between bendiness and pressure.

Limitations of the Lovehoney rabbit vibrators

I wouldn’t recommend making more than a 70° angle between the prongs or using it on someone with a longer than 2″ clit-vag gap. You can undoubtedly splay the all-silicone “ears” apart to accommodate a large clitoral glans, though. 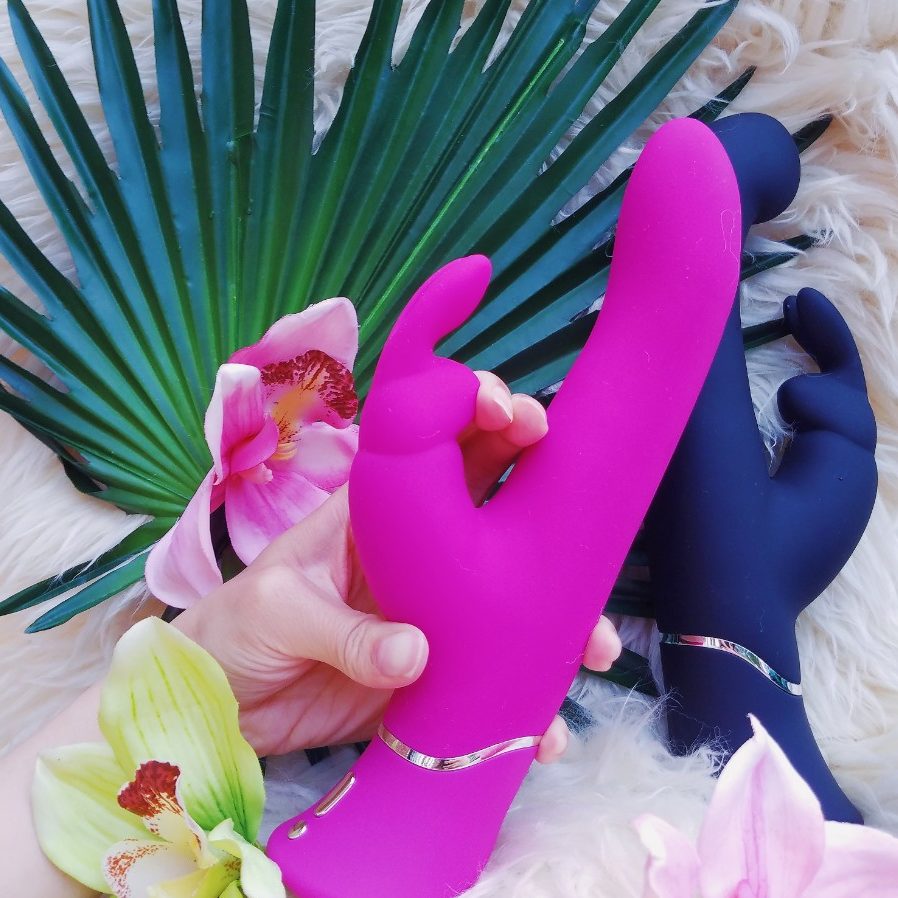 THEY ALSO DON’T POKE MY CLIT

Instead, the Happy Rabbit’s big, rounded ears nestle my clit over the hood, like a comforting surround sound system. You can choose to retract the prepuce if you wish, but I usually don’t like firm things touching my clitoral glans directly.

How the Happy Rabbit Curve thrusting rabbit feels in use 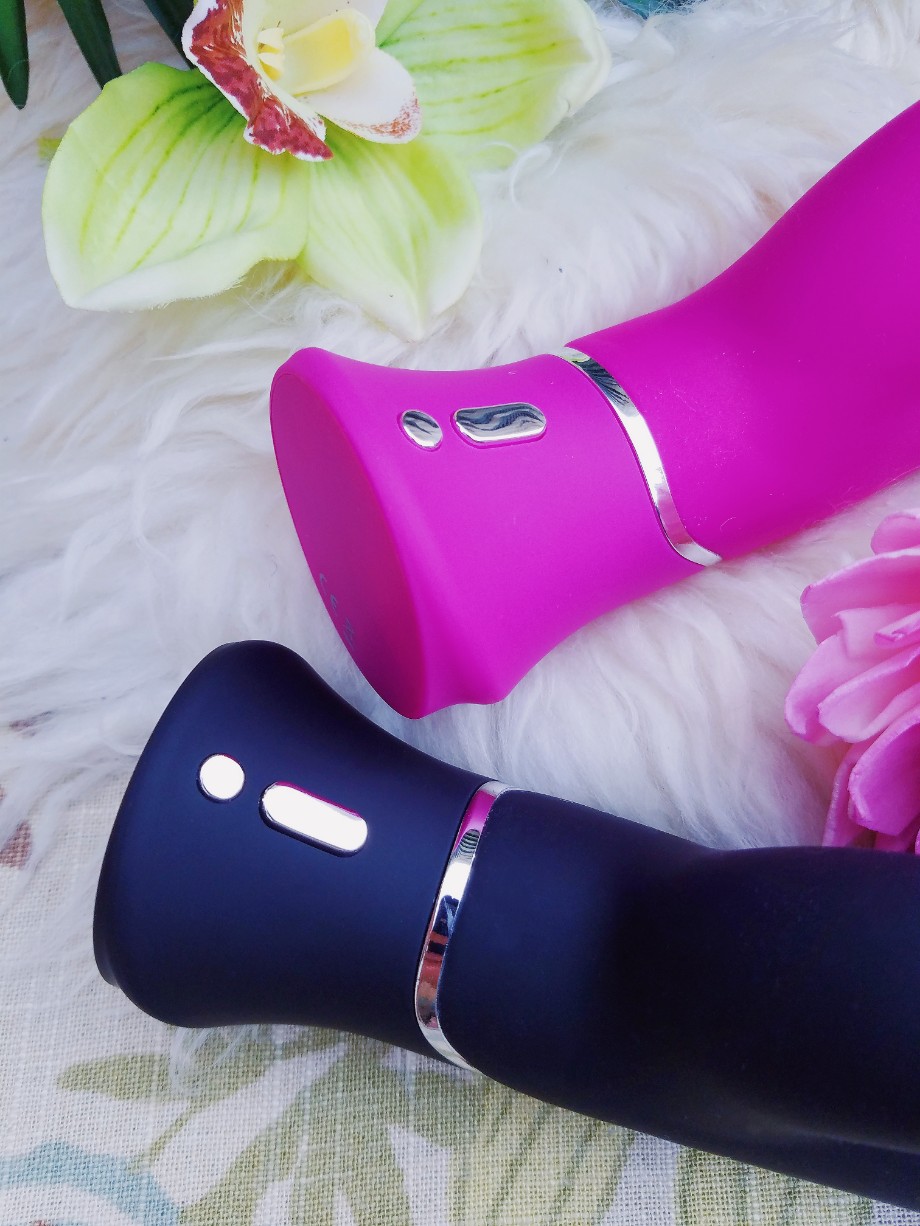 It’s almost absurd how the tempo and stroke length synergize. Like, “laughing at how quickly I orgasm”-level stimulation.

(…and whose bodies it might not work well for)

It doesn’t aim for a specific spot internally.

The Happy Rabbit Curve relies more on its motor than its shape. It’s more of a generalist than the G-Spot Stroker Rabbit, but because of that, it can suit a wider variety of bodies.

I know that straight penetration isn’t for everyone, but the Happy Rabbit Curve delivers if tip drilling is your thing. Get a We-Vibe Nova instead if you want more of a G-spot specialist. 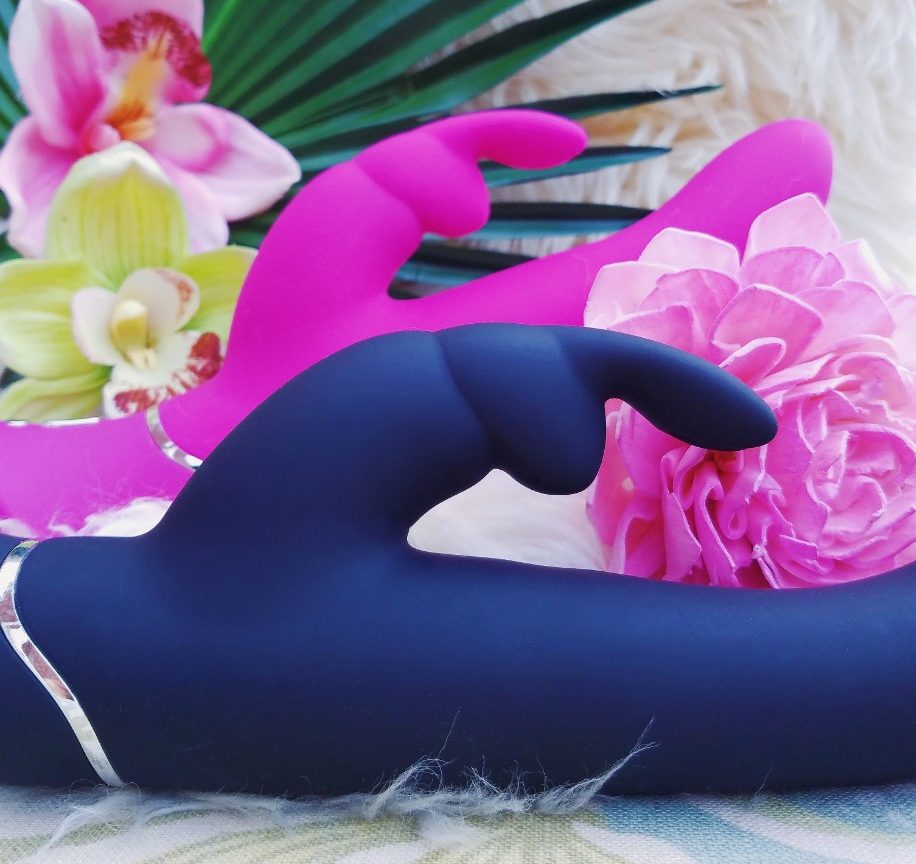 The clitoral vibrations are targeted where it counts.

Again, the external portion’s rabbit ear design is for best those who enjoy pinpointed stimulation.

If you don’t like sharp sensations against your clit, the Happy Rabbit line may not be the most comfortable.

In that case, consider instead the Femmefunn Essenza, which has the same punchy thrusting mechanism as the Cadenza, but with a broader external stimulator.

The G-Spot Stroker Rabbit is utterly forgettable, but the Happy Rabbit Curve Thrusting Rabbit is a new milestone among the hundreds of toys I’ve tried. 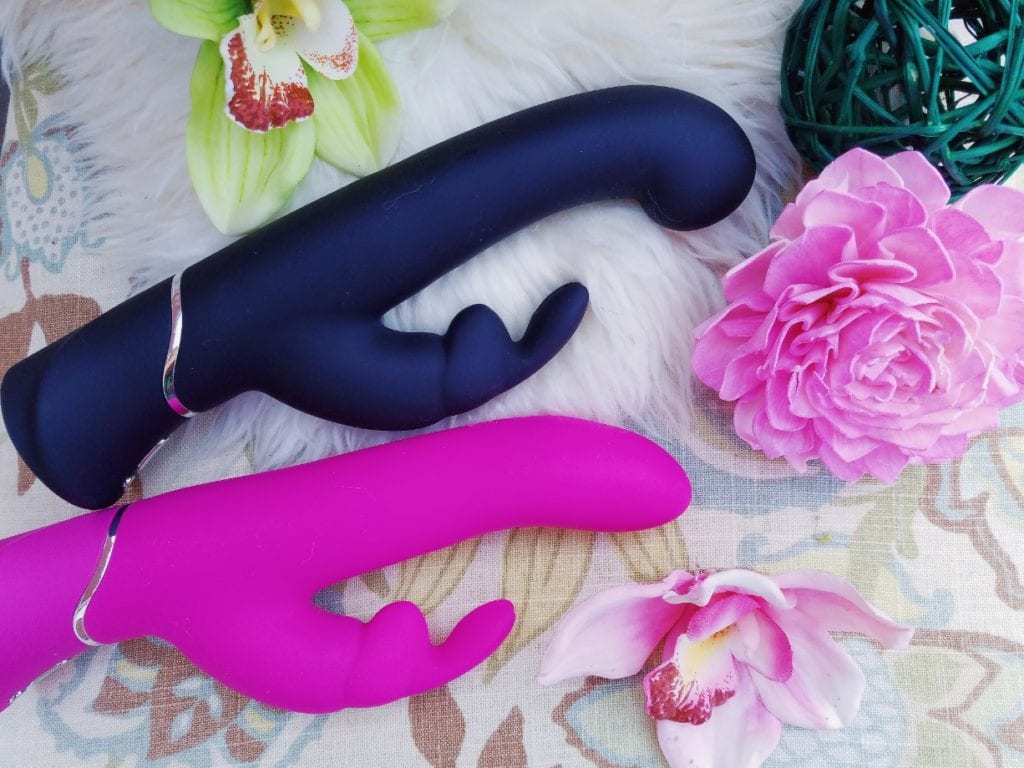 I’m getting wet just thinking about it, like a vaginal Pavlovian response.

Thanks to the We-Vibe Nova, Nalone Pure X2, and Happy Rabbit Curve Thrusting rabbit, I finally have faith in the rabbit-style vibrators I once thought were overrated.

The Happy Rabbit Curve — at least for my body — lives up to the hype.

Take 10% off the Happy Rabbit Curve or anything else at Peepshow Toys with my coupon code, SUPERSMASHCACHE