I’m waiting for the imminent Netflix original documentary about the Lora DiCarlo Osé.

Nobody’s announced any plans for such a feature, but I figure it’s only a matter of time, given this robotic massager’s notoriety.

The backstory: Lora DiCarlo’s Osé is that sex toy

Major media outlets called out the double-standard, the public spoke, and CES listened; they returned the design award to Lora DiCarlo and revised their policies. 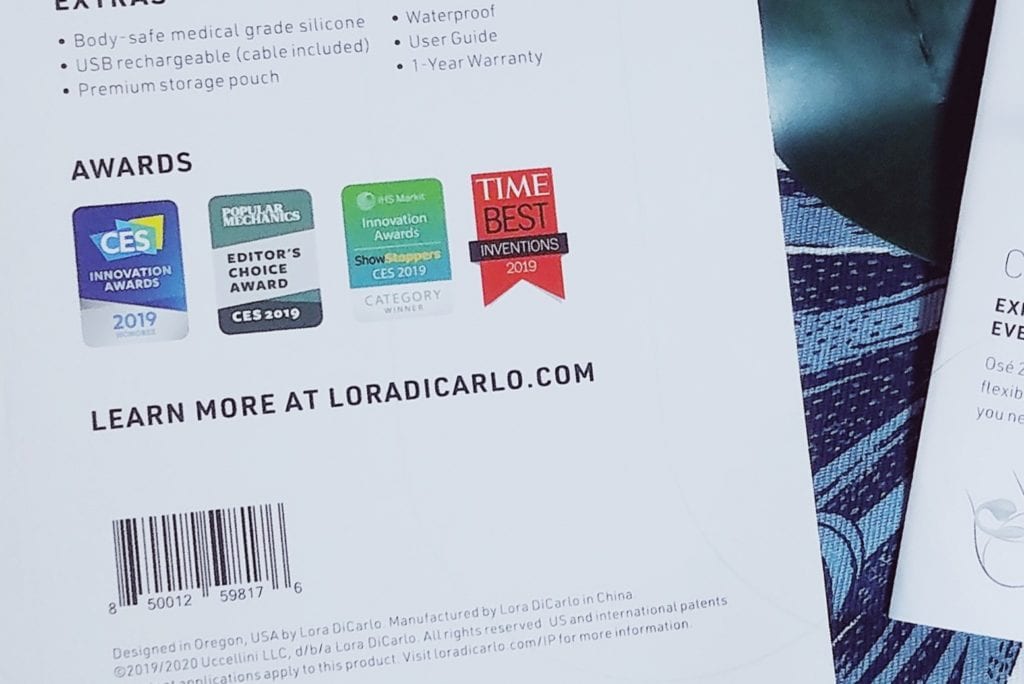 “Wow, those rewards are legit!” a tech geek friend responded.

There were claims that the toy in question could mimic human touch: mouth, tongue, and fingers. Yet, more than one news outlet was useless at explaining what this gadget precisely entailed.

It was shrouded in secrecy even at the Lora DiCarlo booth at Adult Novelty Manufacturers Expo when I went in 2019. There were no photos of the Osé — just a yellow background and text-based slideshow. 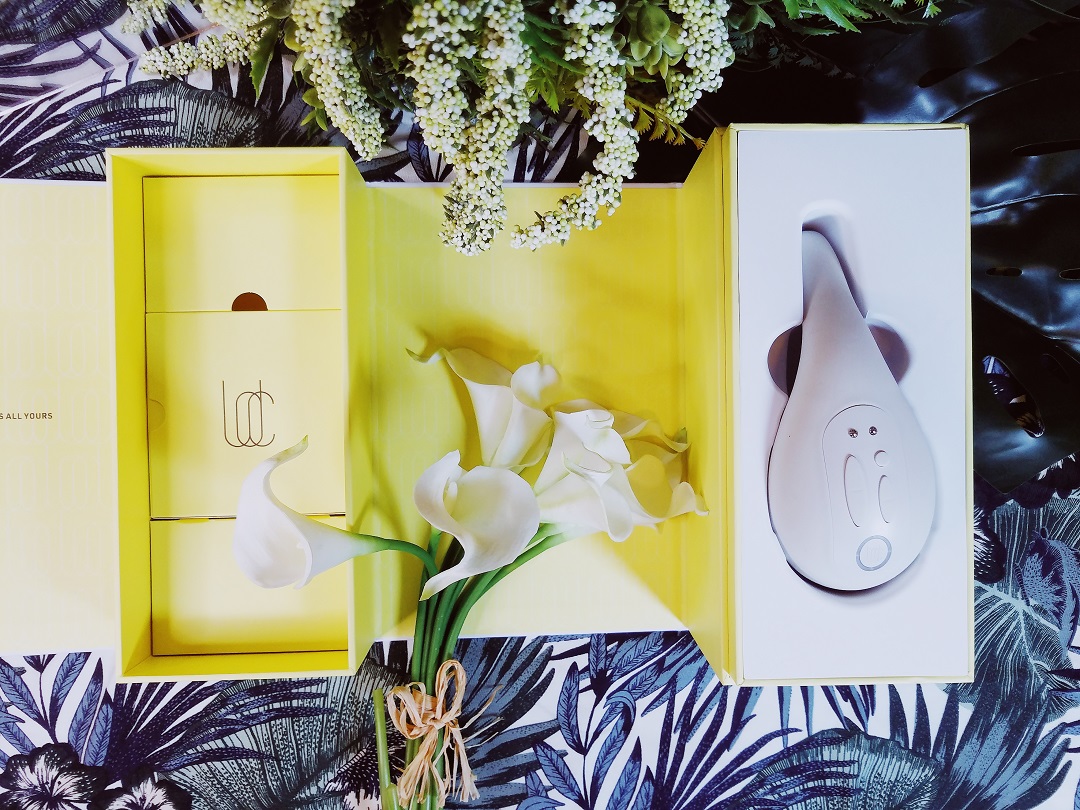 The Lora DiCarlo’s Osé 2’s packaging and presentation are STUNNING.

This Lora DiCarlo Osé 2 review will tell you what you need to know before buying one.

Take it from me, someone who’s critiqued over 200 sex toys: I haven’t been afraid to snub other so-called “innovative” or award-winning toys in the past.

You can trust me to give an honest review of the Lora DiCarlo Osé — and tell you whether it’s worth the hype. 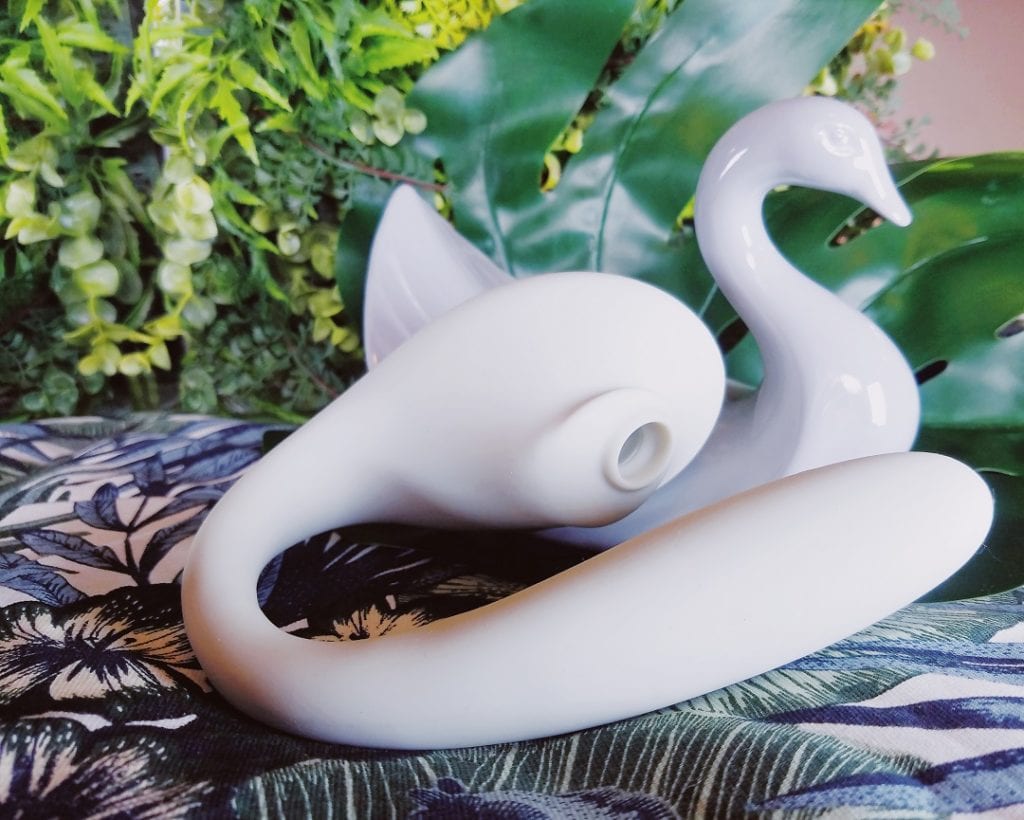 The initial curve when you take the Osé 2 out of the box. You can bend it into a variety of other shapes.

The Osé is a dual-stimulating sex toy for blended orgasms.

On paper, none of these individual traits stood out to me — let alone seemed worth freaking out over. I’ve seen all of them in varying forms before:

To say that the Osé is unlike anything else I have ever felt would be a lie. 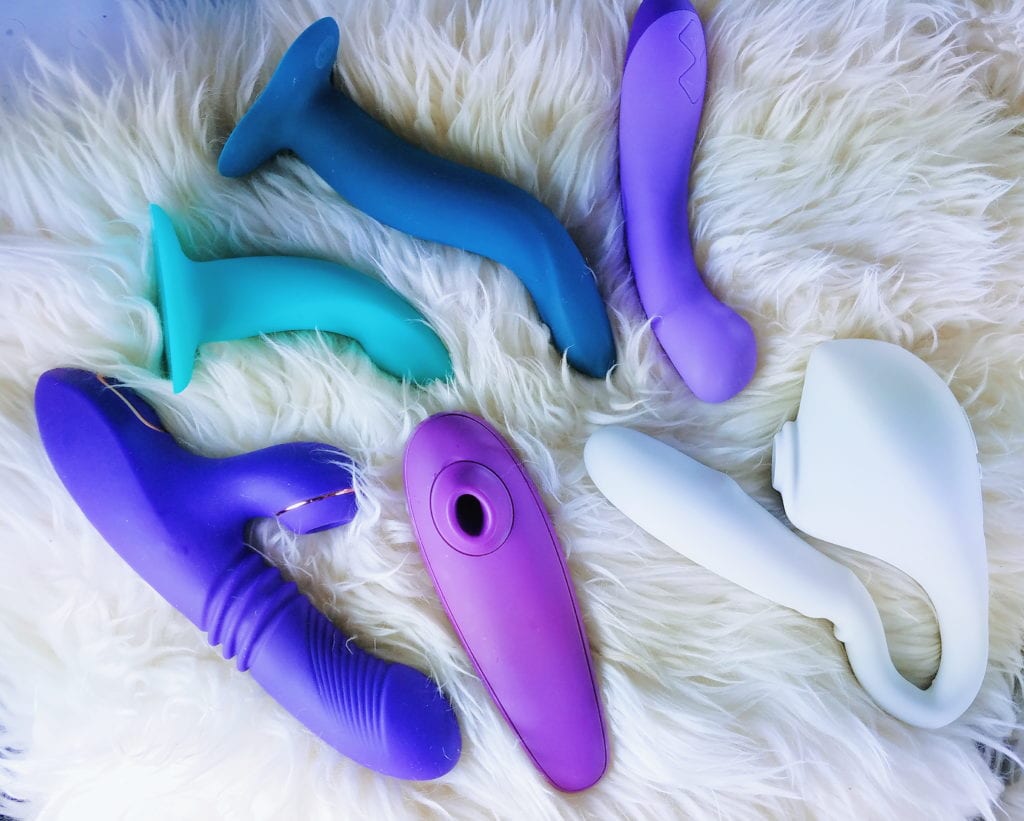 However, the Lora DiCarlo line doesn’t have to be the first to be the best at some things it does.

Its external motor has some serious VROOM, and the massaging bead is far more pronounced than in toys I’ve seen before. The same goes for the Lora DiCarlo Filare vs. the LELO Ora 3, as well.

And the Osé 2’s wire core for an adjustable fit? Well done!

It’s all in the execution. 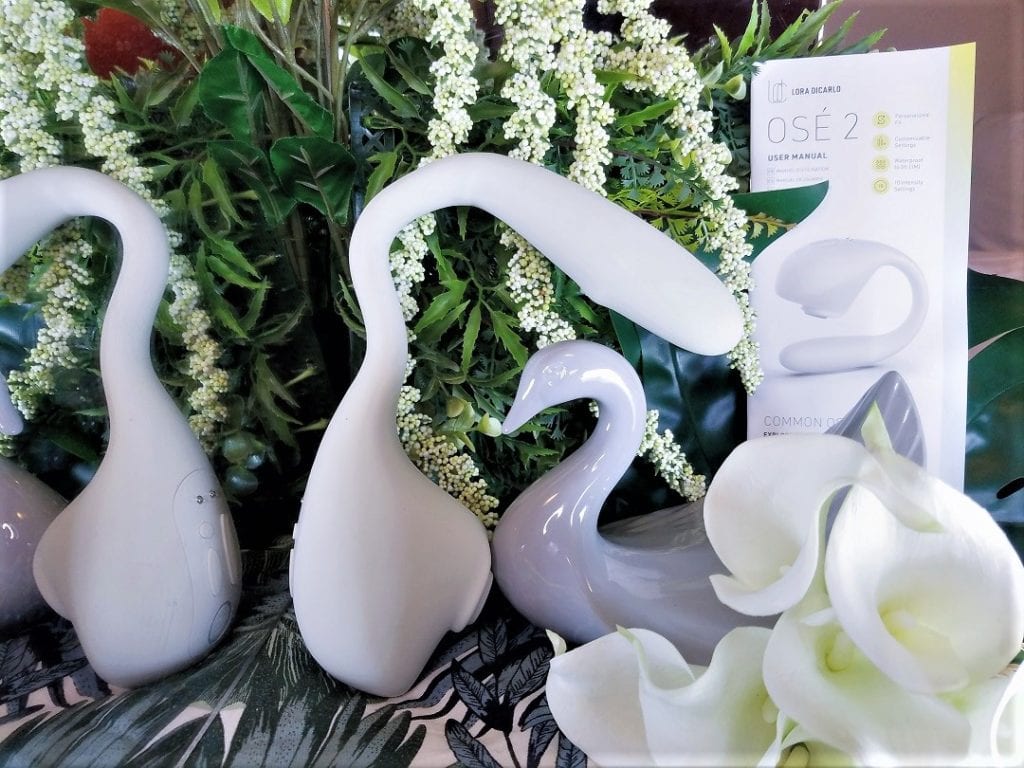 You probably won’t bend the Osé 2 like this to use it. I’m just showing just how adjustable the neck is, accommodating a wide range of clit-vag gaps.

How does each part of the Osé 2 massager perform?

I loved some parts of the Lora DiCarlo Osé 2 and loathed others. If I sound harsh, it’s because I have high expectations of what it can do. 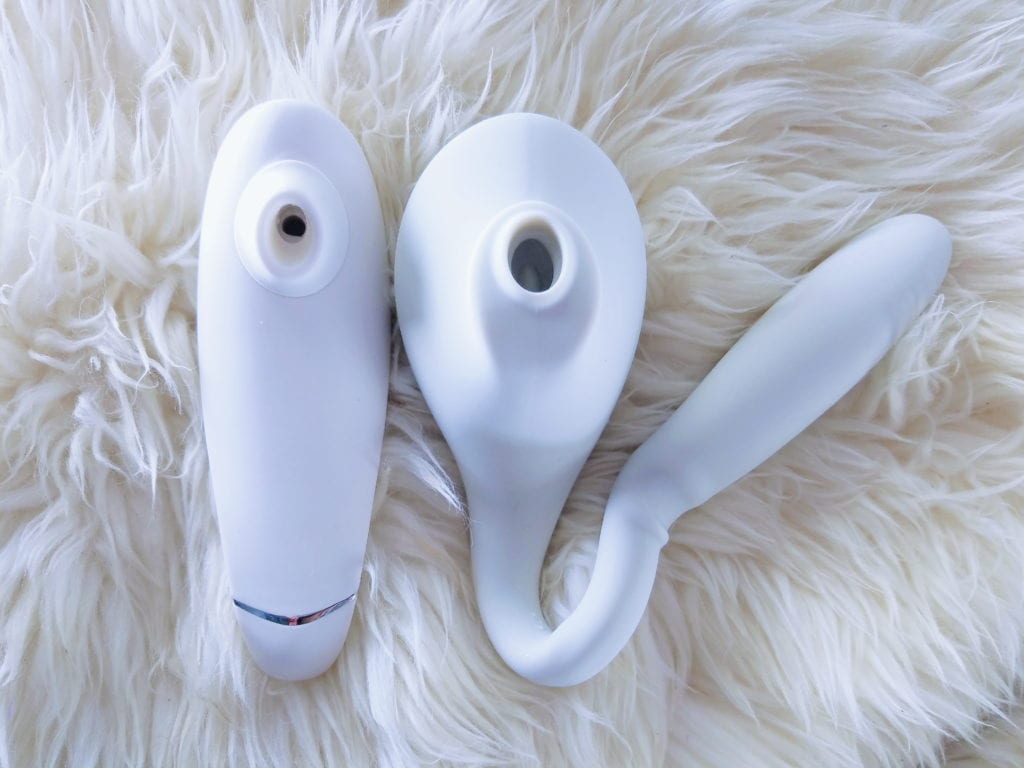 Womanizer Premium next to Lora DiCarlo Osé 2. The Osé’s external portion starts broad but gets narrower toward the opening to fit between the labia.

These external massagers all work the same way: sealing over the clitoris while the thrumming motor pushes air back-and-forth. It’s like shaking the stimulation site without actually touching it. My finicky clit is a fan of that!

Yeah, it’s clunky-looking for a rabbit-style toy, and it’s on the moderately loud side, but this motor’s no joke.

The Osé’s most powerful clitoral air pulses aren’t solely because of the speed — they also maintain their thuddiness as you increase the intensity.

It’s a 9 out of 14 in power compared to the Womanizer Premium 2. 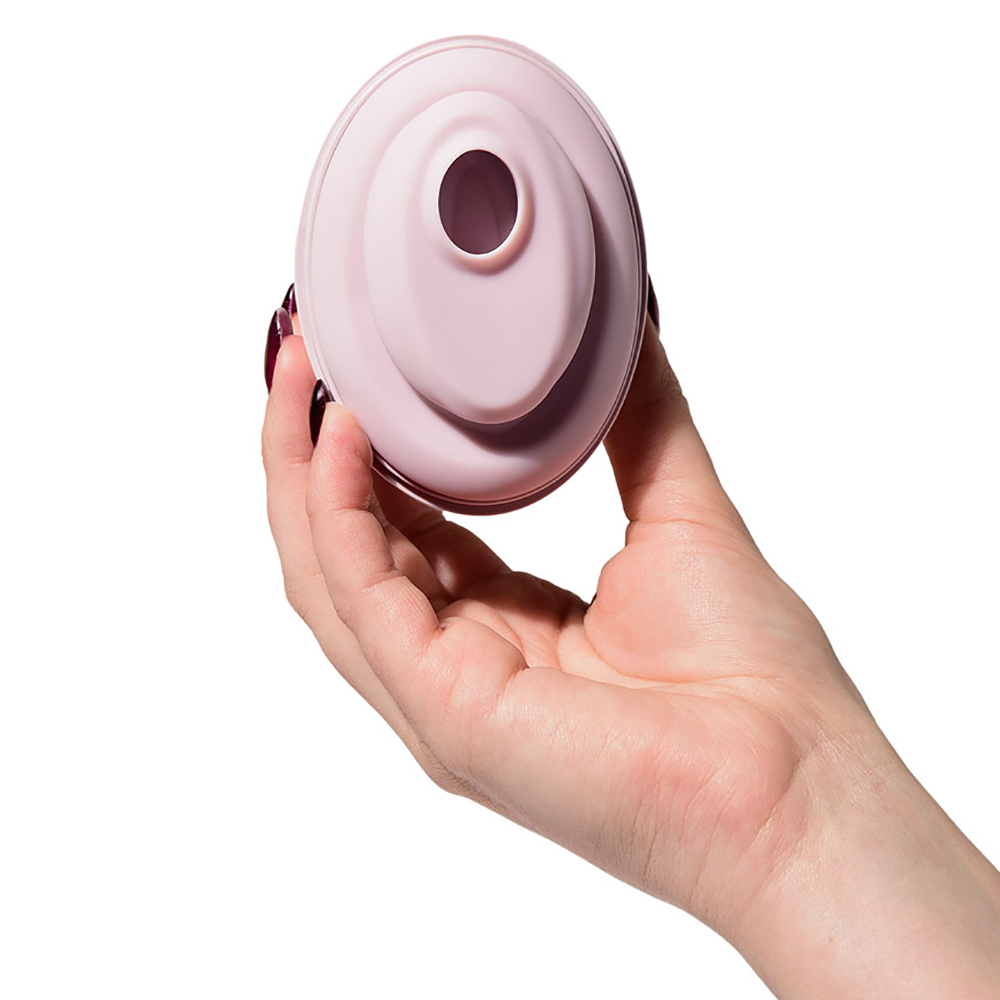 Even if you find the Osé’s other features off-putting, you can get the same technology in an external-only unit: the Lora DiCarlo Baci.

Where the Lora DiCarlo Osé 2 deserves a nod of respect

Its flexible and adjustable “neck”

Let’s discuss a problem inherent to dual-stimulation massagers: they’re highly anatomy-specific. The more things a sex toy tries to do at once, the more likely it is to fail the user. With a $290 price tag, the Lora DiCarlo Osé is not a small gamble.

If you’re curious what matches with my body, it’s something like this bend:

My clit-vag gap is about 1 inch, and my G-spot is shallow — about an inch-and-a-half inside. You can expand it waaaaay beyond that, though.

The wire in the Lora DiCarlo Osé 2 happily maintains its curves during play, without actually being rigid. There’s some springy hinging to it, so you can open it just a little without straightening out the actual core.

To recap, you can adjust the Lora DiCarlo Osé’ 2s

If you want it to blow air directly at the clitoral glans, that’s an option. If you prefer it over the hood, you can do that, too.

It’s a thumbs-up from me. 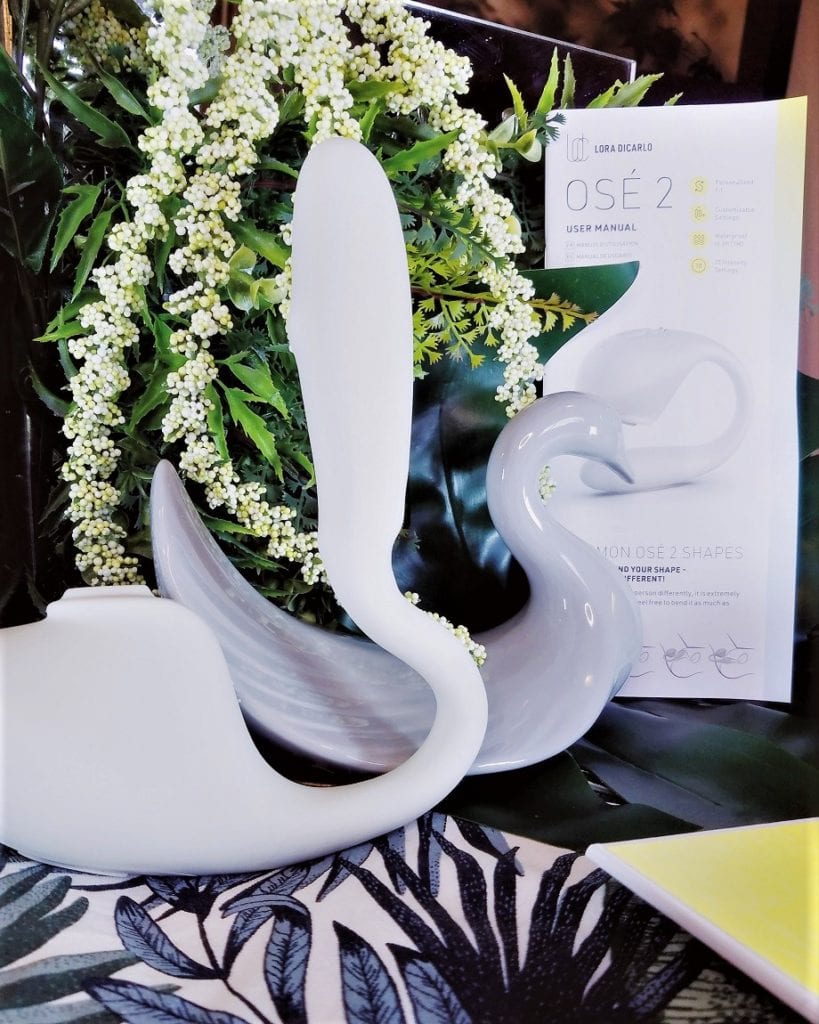 You can adjust the Lora DiCarlo Osé 2 for deeper penetration IF YOU WISH. It’s not necessary.

“I’m sure it’d be great if you have a mile-long vagina, but otherwise, it’s up in your ovaries,”  sex shop friend texted me, showing me the Osé.

“That’s me! Sounds like I’m the perfect candidate for it.”

It looks ridiculously long, in part due to its extending neck. I could insert 7 inches, but the Lora DiCarlo Osé 2‘s designated insertable portion is average.

Our other concern was about Osé’s sloooowly-tapering G-spot “head.” See, the best G-spot vibrators tend to have shorter and more generously-swelling tips with curved shafts.

That way, it nestles the pubic bone’s dip and presses against the front wall while thrusting. Such a feature was conspicuously absent in the Osé

Why these features make sense

You have to remember: the Lora DiCarlo Osé 2 is not a traditional thrusting toy. Position and adjust it once, turn it on, and let the motors do their thing, hands-free.

And you don’t have to insert the phallic part all the way. Consider it a vessel for the rolling bead’s back-and-forth motion against your G-spot. Depending on your anatomy, you may only put 3 or 4 inches inside. It’s all about the machinery! 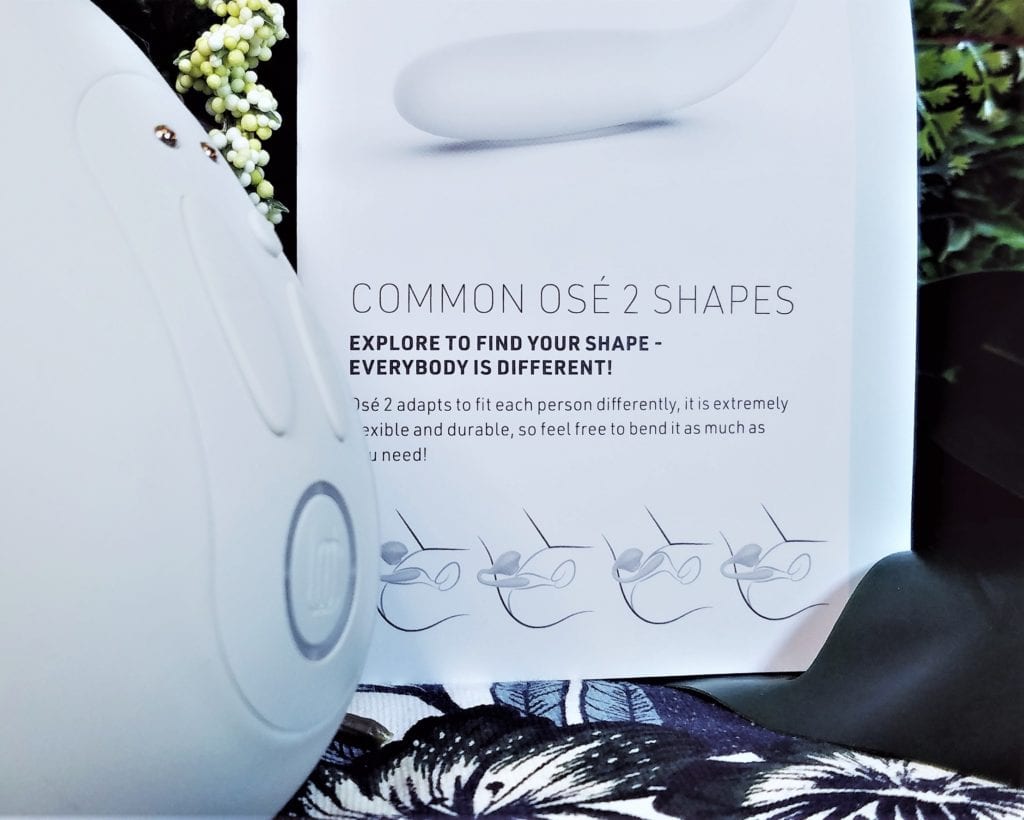 Where the daydream comes to a screeching halt

I’ll start with the benign before moving to the potentially orgasm-ruining “What the fuck?”

For one, the air pulses are loud (duh), and OH GOSH, the rolly bead sounds BLATANTLY robotic. I wouldn’t call it the Pixar lamp with a jackhammer like my friend did, but you get the idea. Think of a remote control toy car’s revving.

But that pales in comparison to the Lora DiCarlo Osé’s motor stalling at the critical moment.

I’m someone who easily orgasms via penetration alone. If the Osé’s internal motor could get me off, with just the microrobotic movement inside, it would genuinely be noteworthy. And it almost can, if it’s clamped tightly enough. Almost.

I get to that peak. I clench. And the internal ball’s back-and-forth stops entirely.

I’ve lost count of how many times I asked my boyfriend, “YOU HEAR THAT SHIT?” when the loud motor slowed. And I grumbled and grimaced as I neared and lost yet another orgasm. Yes, even when the battery’s fully charged. 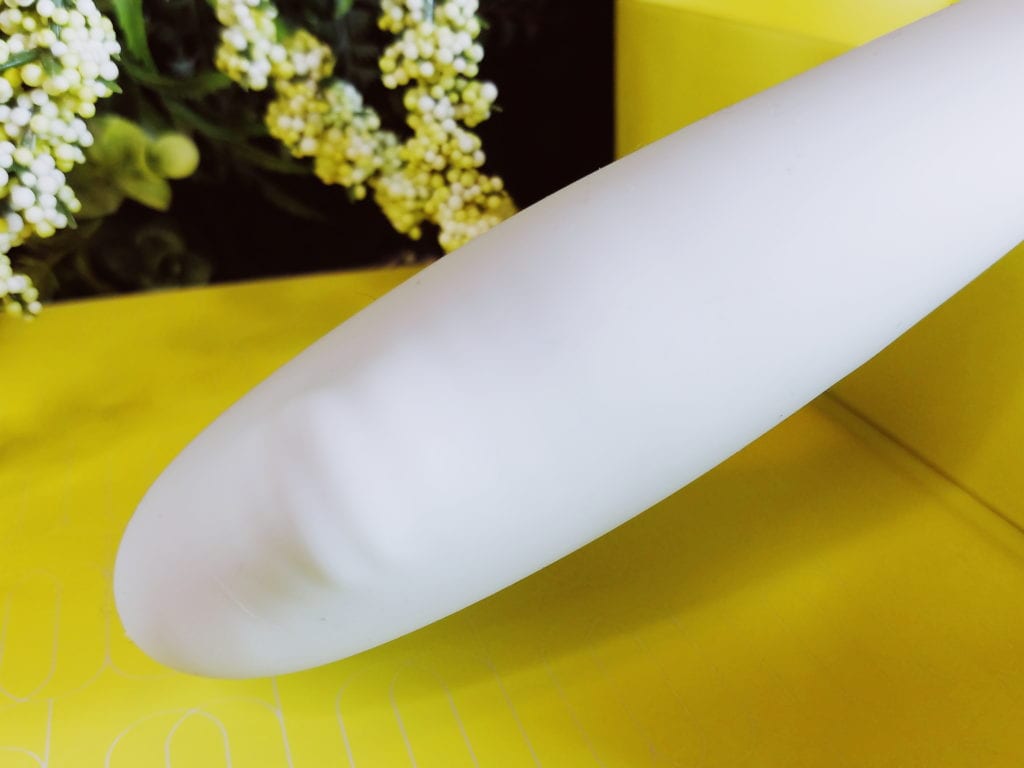 The Osé 2’s rolling bead is close to the tip, which makes sense for G-spotting!

I get that most people haven’t done vaginal weightlifting and don’t clench as hard as I do.

If you want me to be generous, I could consider that the Lora DiCarlo Osé is meant to be a dual-stimulator and not an insertion-only toy. Surely the external motor’s intensity could compensate for a relatively small hindrance, right?

Osé’s external motor is the showstopper, and the internal G-spotting bead stops. Could I call the result “blended orgasms” anymore? 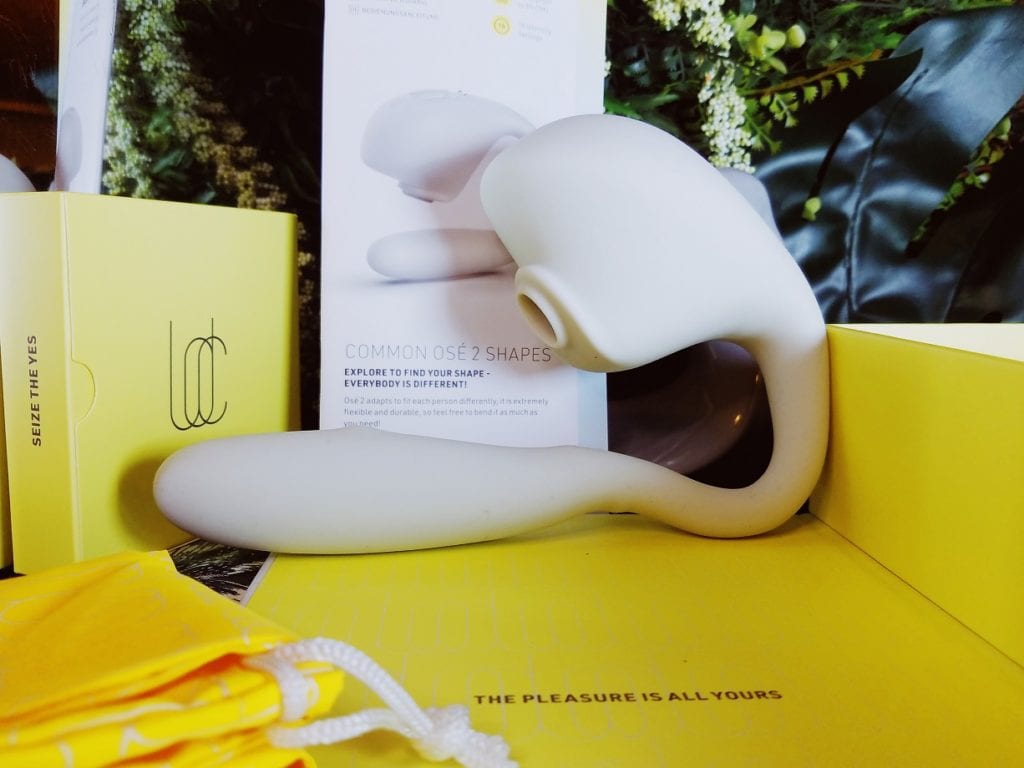 What comes in the Osé 2 box: the massager itself, an instruction pamphlet, a charging cord, and a cute plastic pouch made of 100% recycled plastic salvaged from the ocean.

My verdict on the Lora DiCarlo Osé 2

I ignored the Osé at first. Surely, it’s just hype from the uninitiated. Then I held an Osé review sample and was all-around impressed. The external motor’s wand-like power in pressure wave form gave me hope.

Then I inserted it and remembered why I’ve historically been salty about dual-stimulation massagers. I wonder if Lora DiCarlo’s engineers plan on giving the Osé and Onda‘s internal motor MORE! More juice, more definition, more MORE MORE MORE MORE!

Even without the design flaw, the rolly ball would still feel good — just not worth $130 for me. My internal clitoris needs deeper pressure than what the Osé’s automation can offer.

Their external-only, tongue-simulating adaptation of the beads has my attention, though. 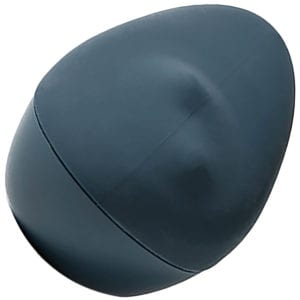 The Osé is glitz and glam for the shows. The newer Lora DiCarlo toys are for the consumers.

Rather than push for more all-in-one toys, Lora DiCarlo’s Baci, Filare, and Onda focus on one zone at a time. It’s more practical for most users to mix-and-match what works for them.

For the average-sized clit, it’s hard to go wrong with the Baci’s wand-level-powerful air pulses. It’s not the most fat-friendly or discreet option, but its strength . Not anymore. See my air pulse massager comparison for updates on the best suction vibe.

For now, I’d like to pretend that the Osé and Onda don’t exist.

This Lora DiCarlo Osé 2 review is a reminder that the most high-end and innovative sex toys aren’t for everybody — no matter how versatile they claim to be. 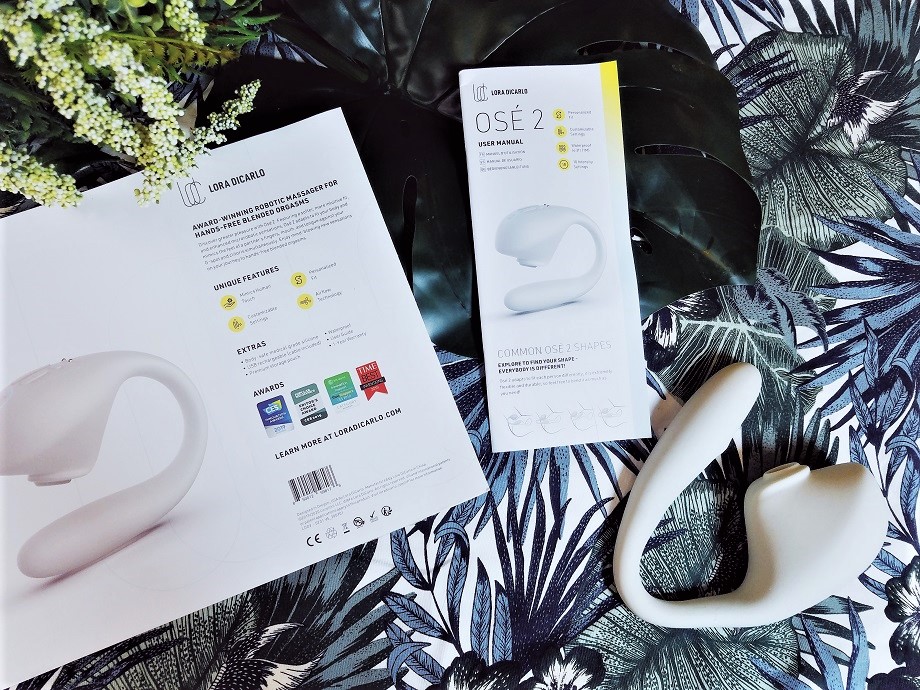 Take 10% off a Lora DiCarlo Osé or Baci robotic massager

…or literally anything else. Use coupon code supersmashcache at Peepshow Toys. The discount applies sitewide, so knock yourself out!

I do use affiliate links in this Lora DiCarlo Osé review. That means I receive a commission at no extra cost to you when you shop sex toys via my links.

However, that doesn’t sway my opinion of the Osé 2 robotic massager — I’m honest about what I love and what I loathe.

This blog is how I pay my bills, so I’m eternally grateful for the shops I work with and for my readers!

Did you appreciate this post? Consider leaving me a tip! 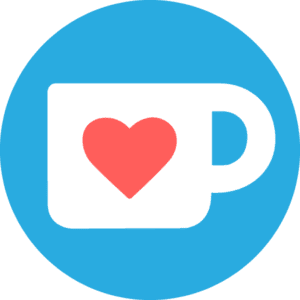