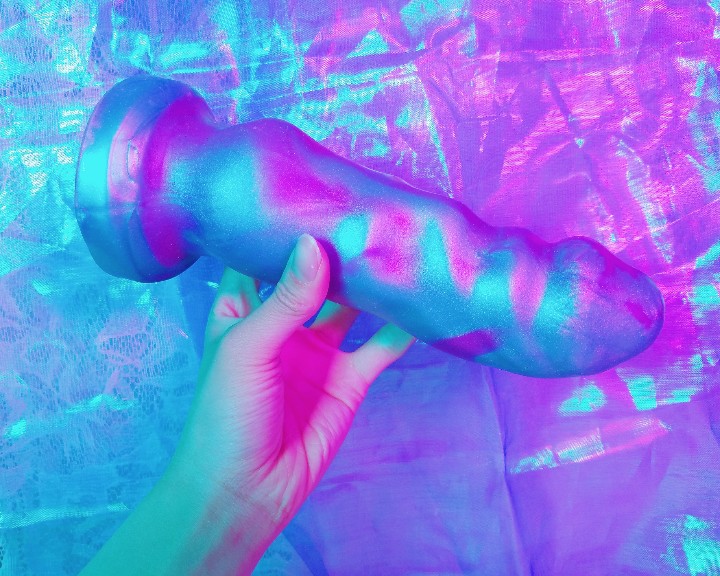 Stack two [soda cans], and that’s about the size of the Pris Toys Sentinel.

I’ll be upfront about how I feel: it’s no mystery that I like big toys. The eye-popping palettes by Pris Toys are just a bonus. 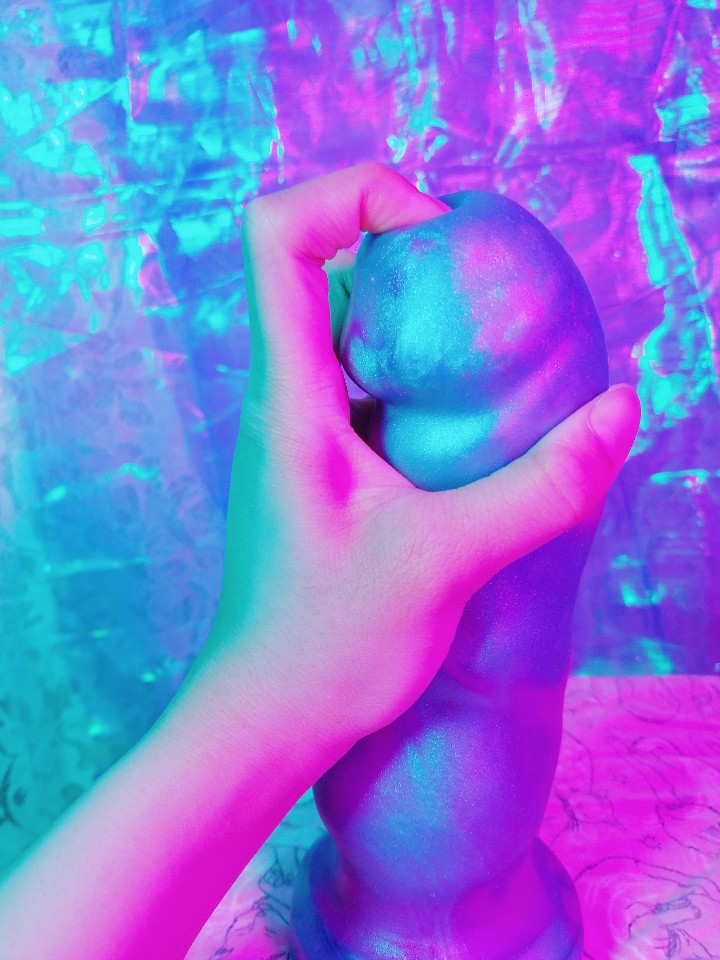 I mentioned before that they must have paid attention to other spicy silicone sculptors, based on the Basilisk’s striking resemblance to VixSkin dual-density silicone — and I was half right. It turns out that they intended to go a bit firmer and less realistic than VixSkin, but more realistic than Uberrime, not quite crossing over into the fantasy realm.

The Pris Toys Sentinel‘s head is all gummy candy-like squish, but under that, the firm shaft goes plenty high up. There’s greater contrast in the silicone densities compared to other brands I’ve tried. And I appreciate Pris Toys’ choices here since they make the base easy to grip and the insertable portion effortless to aim.

For reference, a soda can is about 2.13″ across the top and 2.6″ across the middle. Stack two of them, and that’s about the size of the Pris Toys Sentinel. It’s probably a bit heavy to harness, but the 3.75″ diameter flared base makes it anal-safe. 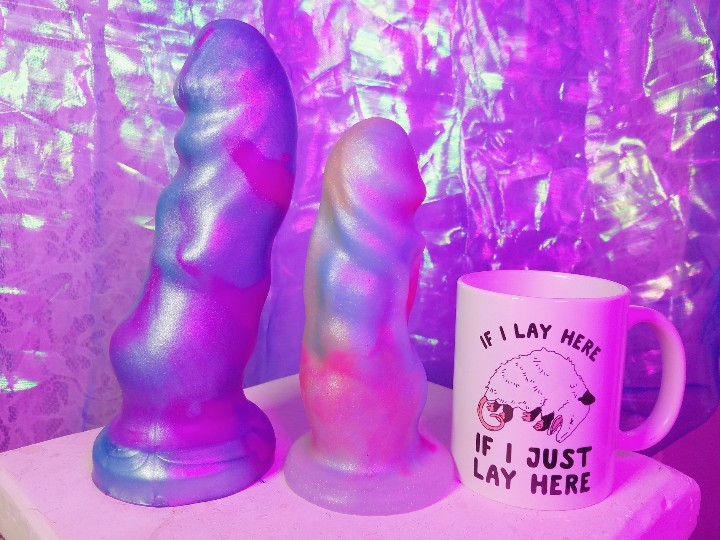 Left to right: Pris Toys Sentinel, Basilisk, and a mug

For now, though, it’s not hard to see why someone commented, “Well, that’s going to make giving birth easy.” (It killed me when someone else responded, “Sure, if you shove it in your cervix……….”)

This thing is INTENSE not just on paper but also in practice.

1 See how the Sentinel’s shaft swoops backward before it tilts forward?

Its curvature sounds unassuming, but it’s actually helpful in going behind my cervix! 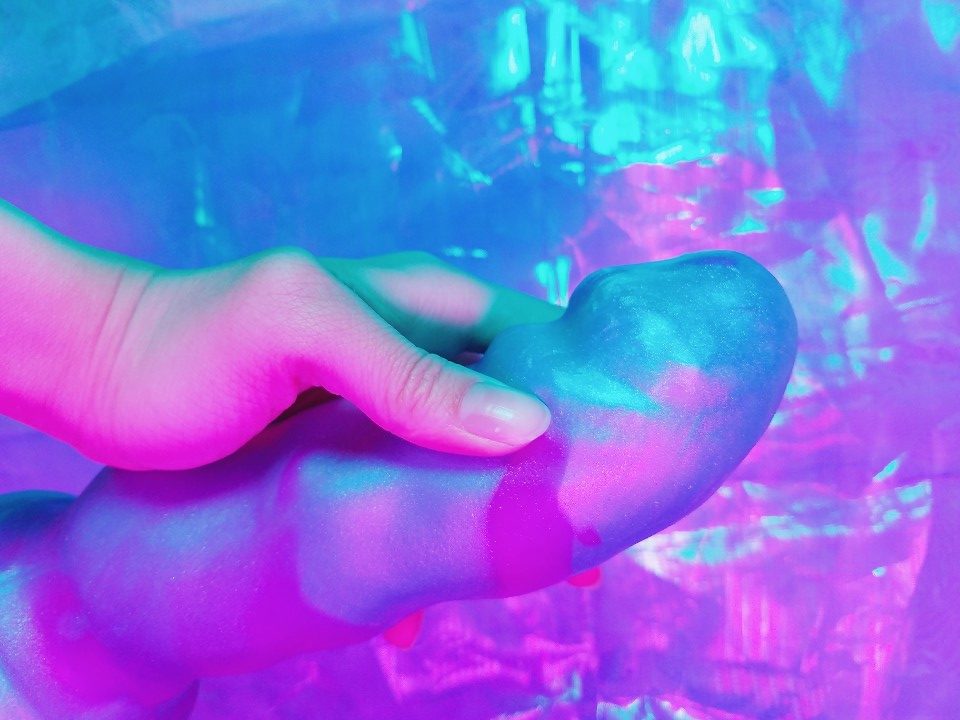 2 Its head is also more pronounced than what I had tried with the Basilisk.

The glans swoops out, protruding suuuper far forward. There’s nearly half-inch of difference in the diameters of the corona and the sulcus beneath. And, on top of that, the head is double-crowned with an abstracted, retracted foreskin design. My G-spot had a lot of fun feeling my pelvic floor muscles grip around the ridges.

4 Finally, I appreciate the glossy surface for smooth entry.

Just make sure to use ample water-based lube. The only thing I’d add is an orientation marker or some asymmetry in the base so that users can more easily discern which way is forward. Big toys can be unwieldy and rotate a little while inside. 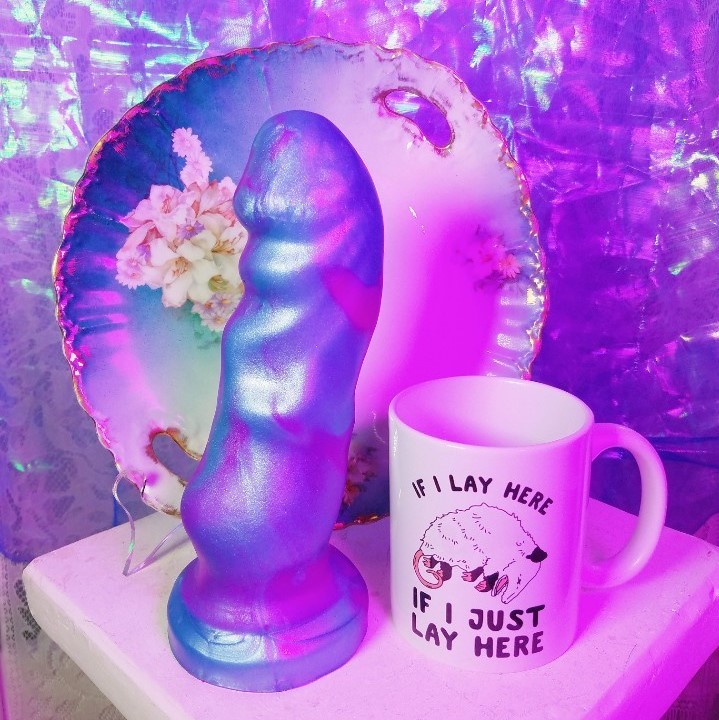 If it’s big ridges and gargantuan girth you crave, it’s hard to go wrong with the Sentinel. Just make sure you’re actually ready for it.

The Pris Toys Sentinel is available in 2 color schemes at Early to Bed: 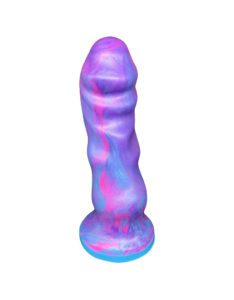 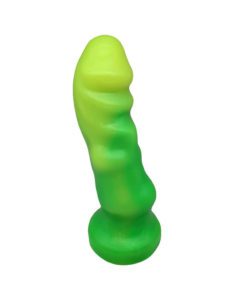 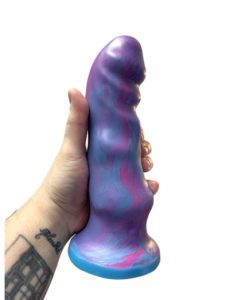 My version of the Sentinel isn’t one of their usual color palettes, but there’s a chance you could get something similar directly from the maker via their Mystery Color option.