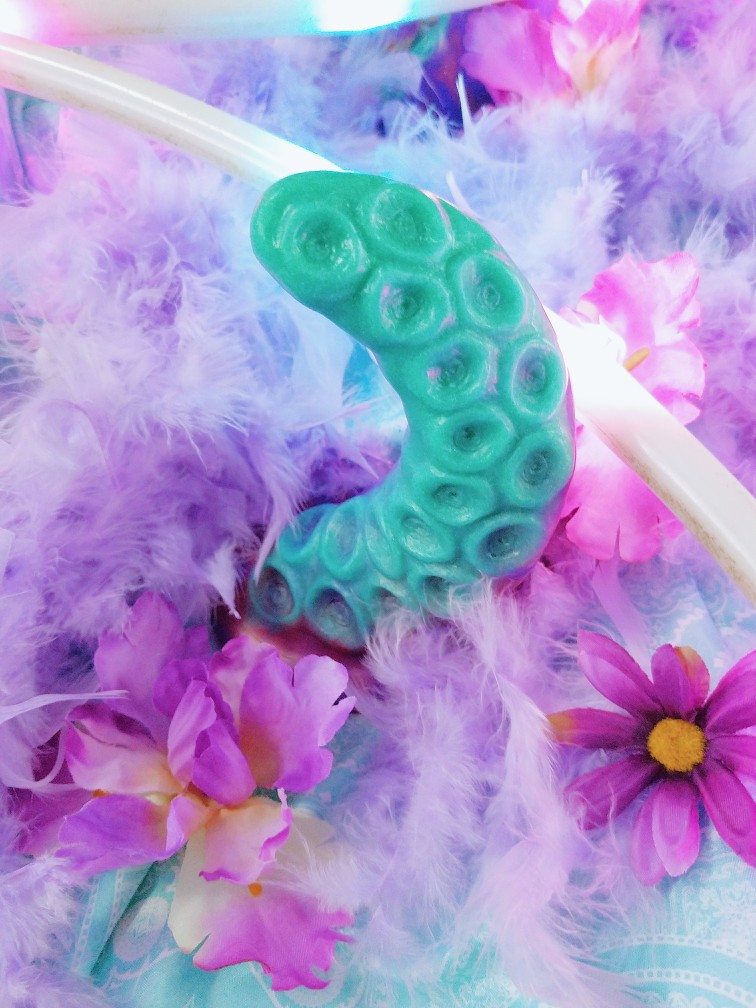 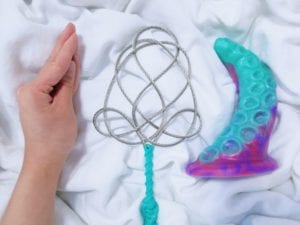 There are some serious suckers, of course, but they’re mostly out-of-the-way of my sensitive front wall, apart from near the base. I can enjoy the extra intensity if I twist Deep Diver side-to-side while thrusting, but only in small amounts. My back wall is less sensitive to the nodular textures, so the arrangement is a perk for me. 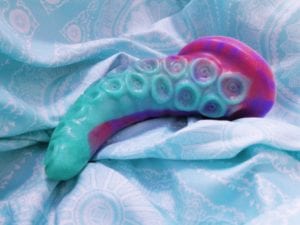 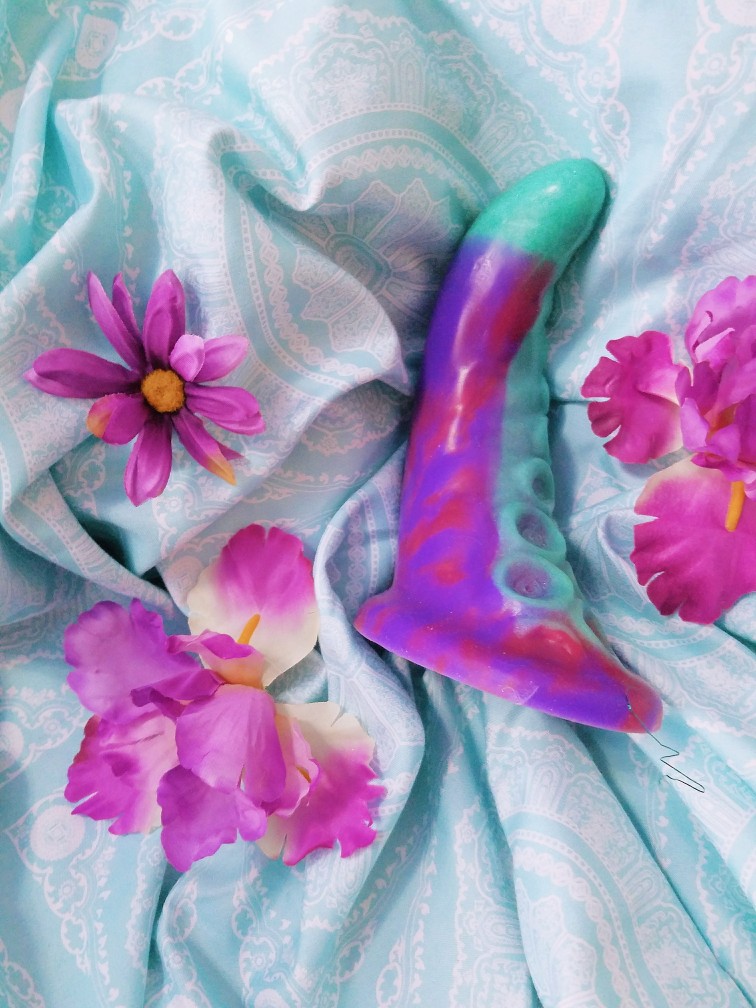 You can pry my near soda can-sized Randy from my cold, dead hands. My vagina can (perhaps infamously) consume it without using a warm-up toy prior. However, not everyone wants such a blunt insertion. And even I am not always in the mood for it.

The Deep Diver fulfills a need for me that not many of my other toys can. (I’m still mourning the discontinuation of the Frisky Beast / Twin Tail Cybersaur.) When I insert the Deep Diver all the way, its taper reminds me of what I love about having a fist inside me. There’s that pressure against my pelvic floor muscles and the impending increase in intensity, but smoother and not bony. It’s also at just the right rate— I’m used to seeing longer and leaner tentacle dildos, which have their place, but since they don’t ramp up as quickly, don’t serve the same purpose for me. 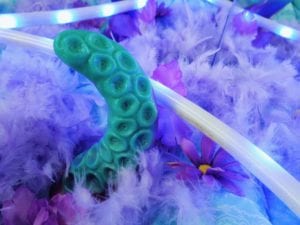 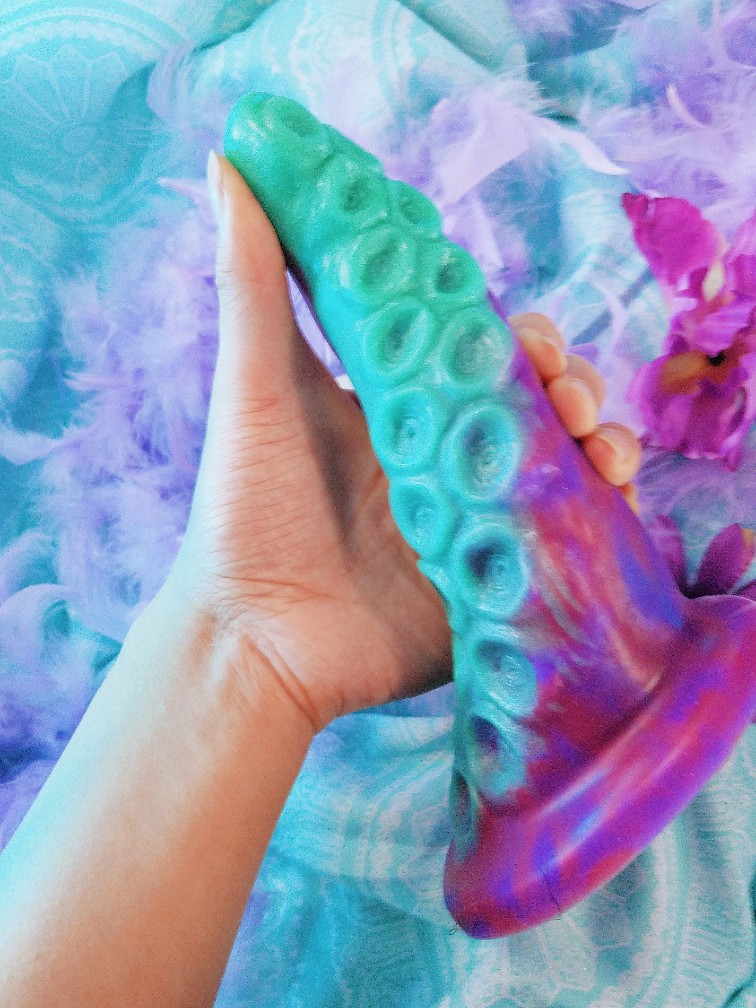 Its strengths don’t stop at the smooth taper. If a centered silicone cone (wow, what a strange-sounding word pair) were enough to woo me, then the Tantus Ringo or practically any huge classic butt plug would feel stellar to my vagina. And that’s not the case when the Ringo’s point stabs into my cervical os. The Uberrime Deep Diver‘s curved shaft, in contrast, averts the crisis by directing the pointy tip away.

It doesn’t hurt my cervix, but the Deep Diver also doesn’t massage it. Its 5.5″ insertable length isn’t ideal for that. Nevertheless, I stand by my statement that deep penetration does it the most justice. The Deep Diver targets my A-spot, on my front wall and a bit below my cervix. (Note: some A-spots are deeper, so your mileage may vary. Know thyself.)

While it easily straightens out in my hand, it gives my A-spot ample pressure and resistance and the hit of dopamine I seek. The Uberrime Deep Diver is the kind of A-spot heaven I had come (no pun intended) to only expect from rigid toys like the stainless steel njoy Eleven or porcelain Desirables Dalia. Perhaps part of what makes it stand out is that, despite its flexibility, it’s steeply curved and pointy, allowing easier aiming when inserted all the way. 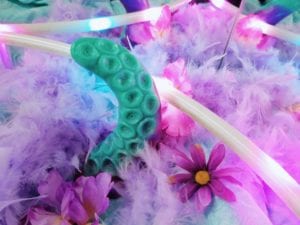 When I’m not testing new toys or evaluating work orgasms for this blog, I’ll often reach for the Uberrime Deep Diver for recreational orgasms. The one downside is that the suckers require careful cleaning, but a clean, soft-bristled toothbrush will do the trick. When in doubt, a pot of boiling water suffices to kill germs. But that applies to any heavily textured toy, and among them, the Uberrime Deep Diver is beyond worth it. 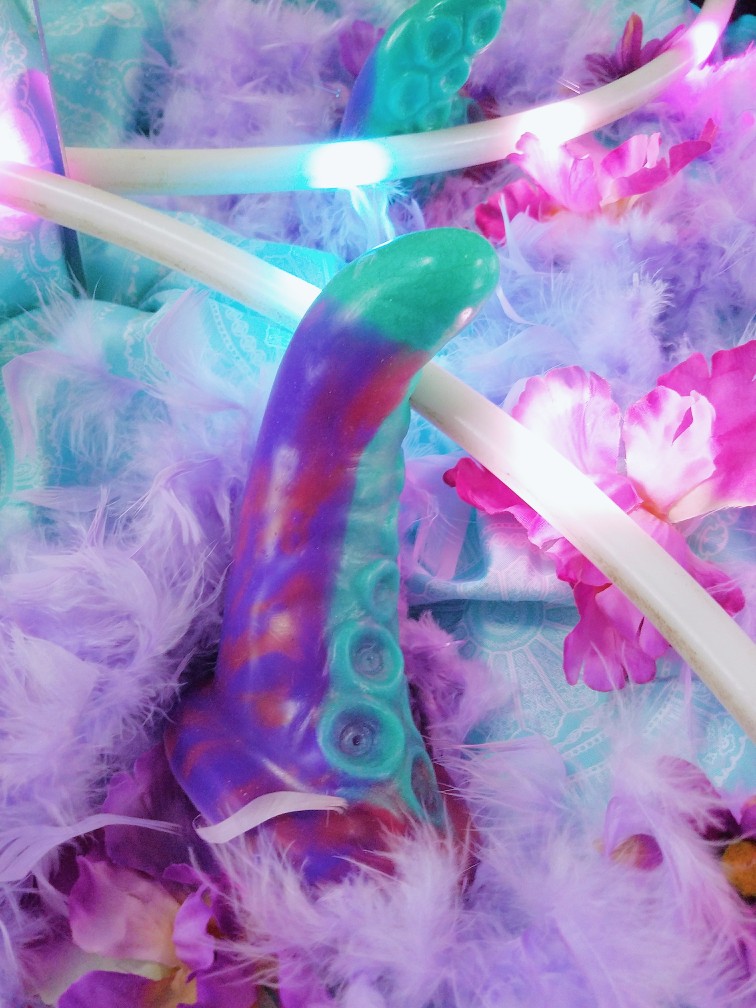 Oh, and can we talk about how gorgeous this batch’s Uberrime Deep Diver color scheme is? It is, after all, aqua green, electric violet, and a dusty red, like the color palette of my blog banner. Marco sure showed fantastic taste! Even the Deep Diver’s name is my thang. Probably the only way it could get more on-brand for me is if Uberrime released a longer version that reached an even greater max diameter. A girl can dream, right? 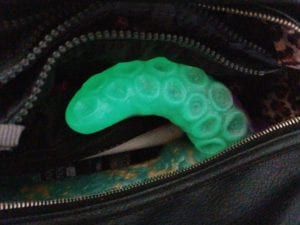 I received the Uberrime Deep Diver from SheVibe in exchange for my honest and freely-given opinion. If I think a toy feels like putting my clitoris in Satan’s butthole, you’ll know. Trust me.