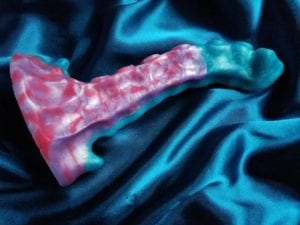 It’s one thing to say that I enjoy vertical textures. It’s another to come via the twisting motion alone or to feel like I’d go insane if I stopped twisting the Uberrime Xenuphora‘s addictive angles left-and-right inside me. What’s more, I want to squish its deliciously textured shaft against my clit while thrusting. 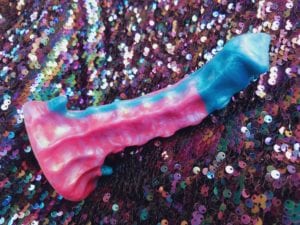 Imagine someone tightly flexing their bony fingers so that the pads met the bases. And the middle segment pressed and swiveled against the shallowest part of your front wall. Feeling one of the Xenuphora‘s more intense edges is kind of like that, but sharper. More crisp and targeted. With some undulating waves and a tiny hint of the higher-resolution suction cups. As you turn the suction-cupped side away, the edges get less pronounced, giving you options for your level of intensity. 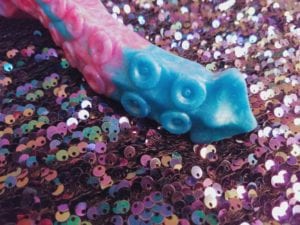 And that flared head? Oof. Fuck me sideways. Literally. If I’m holding on to the middle of the shaft to tip drill, turning the Xenuphora sideways gives me some gentle but precise G-spot stimulation. This head shape is less about pounding (the shaft is too flexible for that, anyway) and more about tracing circles on my internal clitoris. Its subtle stimulation is controlled and enough to make me come.

But why would I want to stop when there are so many angles, dips, and bumps to play with? 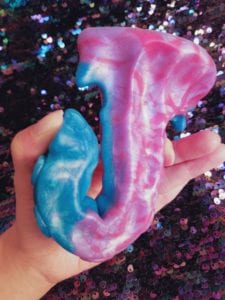 Even if I could request a bigger Xenuphora, I probably wouldn’t, unless I could get a squishier one. The one I have was cast in 10A Shore (springy but not squishy) hardness silicone. In this size, I think the firmness is perfect for bringing out plenty of delicious, targeted pressure from the head’s points, along with some generalized but consistent “OMFG” from the rows of suction cups.

I don’t completely understand why the suction cups are on the outside of the ostensible G-spot curve. Not when surface-level back wall stimulation doesn’t do much for me. But I dig using the curve for deep pressure against my back wall. 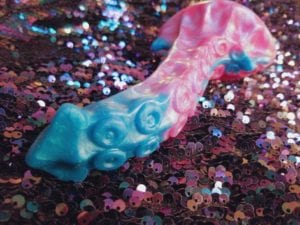 To be clear, PS-spot massage merely feels pleasant to me. Alone, it’s not enough to make me come. But when I angle the Xenuphora so that the curve targets that spot on my back wall, the tentacle suction cups also slide along my front wall and clitoris. And that is a harmonious symphony.

Shallow vs. deep penetration with the Xenuphora 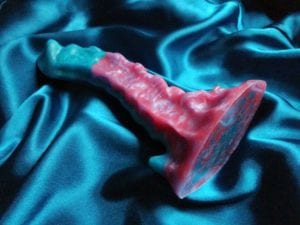 Most of the Uberrime Xenuphora’s strengths, like the suction cups and spear-like head, shine their brightest during shallow insertion. Once you go deeper, there are two main attractions: the sharper edges, and the bumps on the base.

The closer you get to the base, the sharper the edges get. At their sharpest, we’re talking the thickness of a sheet of cardboard. But that doesn’t mean they feel harsh by my standards. Quite the contrary— because they’re so thin, they’re flexible and yielding. 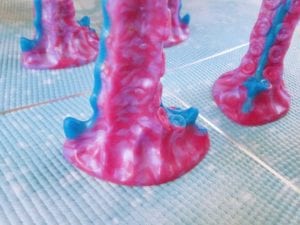 It’s also hard to miss the raised bumps on the base. I have a very average clit-vag gap of one inch, which lines up perfectly with the bump on the suction cup side for nudging and twisting. And even if the Xenuphora doesn’t align with your anatomy as neatly as mine, its shaft is bendy enough that you could finesse it to fit your external junk.

Most times I’m using the Xenuphora, though, I’m not thrusting it all the way. Twisting, maybe. But pushing it against my “go hard or go home” deep spots doesn’t do justice to the Xenuphora’s contours. 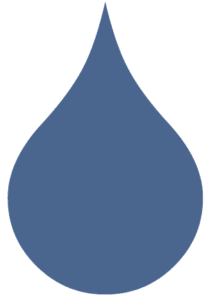 It’s true: the surface’s intricacies hide much vag gunk. I recommend getting a soft-bristled toothbrush for cleaning the nooks and crannies. A pain in the ass? Maybe a bit, but the suction cups are only on one face of the dildo’s shaft. It doesn’t take much time to scrub them.

If you’re more scrupulous, though, you could also boil the silicone for 5-10 minutes to kill germs. 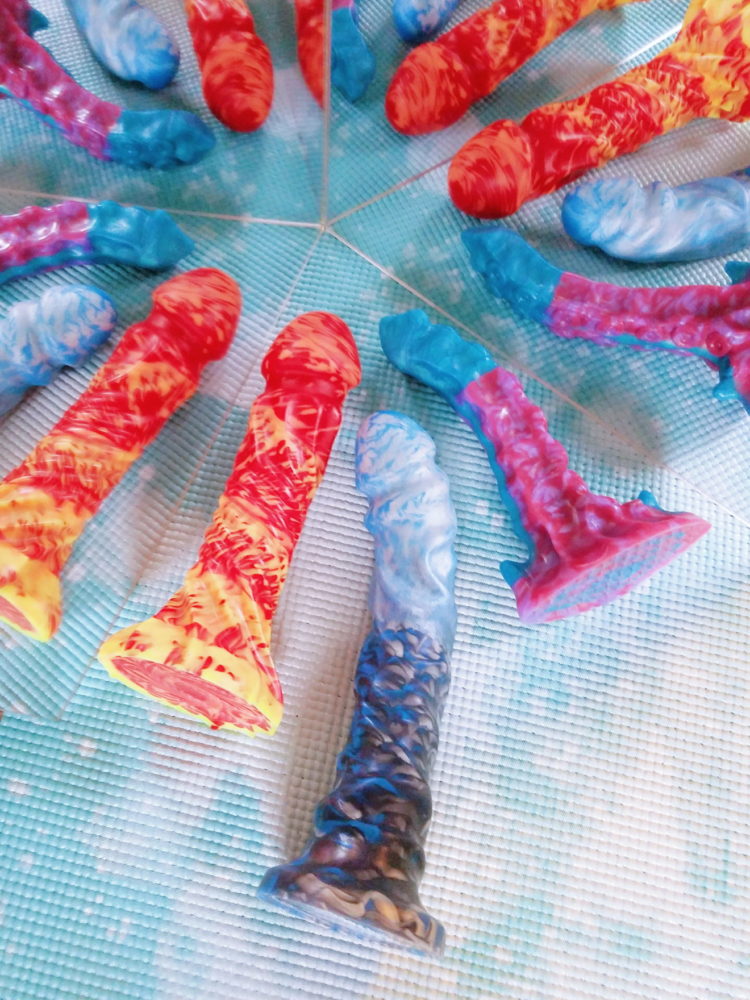 Though the pressure is very focused, many of the more pronounced landmarks are well-spaced, giving me fine-tuned control of the sensation against my front wall. If you like twisting and circling textures, this dildo’s angles are for you.

The waves on the flattened sides also feel very and flowing to my fingers. I’ve made molds and poured casts before in undergrad, and I can imagine how meditative it was for Marco to press and drag his fingers along the modeling material to form the dips.

Everything about the Uberrime Xenuphora screams, “Play with me!” It’s playful for the eyes, fun for the hands to play with, and sure to bring playful explorations to those who love big, structural variations in their sex toys.

I would not recommend the Xenuphora to those who…