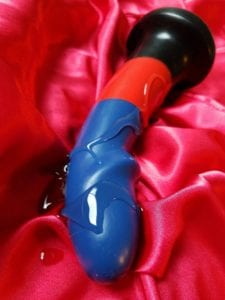 Back when I was popular on FetLife and internet cucks showered me with gifts and worship, I probably could have requested any sex toy I wanted. But I understood so little about the sex toy industry that I hardly knew what to ask for. How I wish I could gift my 2012 self a BS Atelier Max Poly Pride! 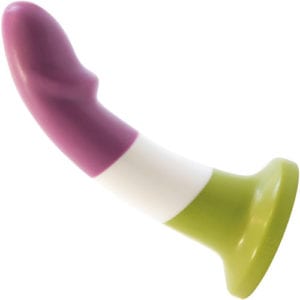 Their Max Poly Pride features diagonal stripes of blue, red, and black. Its sibling, the Max Genderqueer Pride, features stripes of purple, white, and green instead. Both are visually elegant, and when it comes to practical features, there’s nothing left to add or take away. 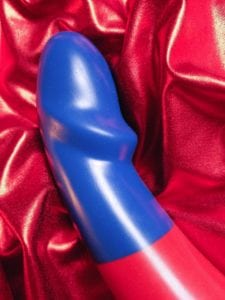 For comparison, the Velvet Thruster delivers 3″ long thrusts. Its 3″ thrust length works for my cervix only as long as I have the thrusting speed turned way up. 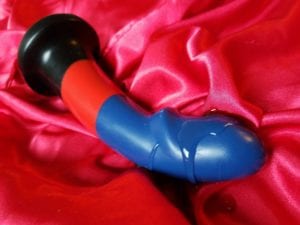 Because the BS Atelier Max’s head is so slim and tapered, it finesses my the area in front of my cervix (my anterior fornix / AFE zone) with ease. And I can’t say that about the Johnny. Nor can I say that about the Chrystalino Champ, which does fit in front of my cervix but feels more “bleh” there. The Max’s shaft is curved enough to be targeted, but without needing bulk.

No disrespect to the Blush Novelties Avant D4 or Temptasia Elvira‘s boxy heads— the G-spot and A-spot stimulation the D4 provides is more intense, but its brute force isn’t always what my posterior fornix craves. My cervix gets the perfect amount of pressure from the Max. I can tilt tip towards my belly button to press against my cervix or A-spot while getting some extra G-spot pressure from the bending shaft.

My review of the Blush Avant D5 said that I didn’t like its bendy shaft. However, I think the real differences are that there’s no curve in the D5’s shaft and the head is too blunt. The BS Atelier Max is bendier than the D5, but its curve and taper does much of the work. Its fit is so much more intuitive to me.

My verdict on the BS Atelier Max 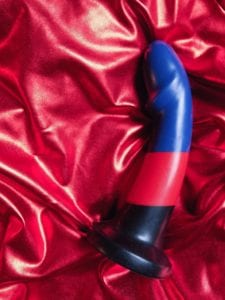 I once called the Vixen Creations VixSkin Johnny the “meat and potatoes” of my sex toy collection, but I think the BS Atelier Max may usurp that title. It stimulates more of my erogenous zones, its surface is less draggy, and I don’t need to warm up to the girth as much. The orgasms are quick and buildable with little added effort on my part. And it’s not a coincidence that the BS Max reminds me of my beloved Vixskin Johnny— their shaft curvatures are similar.