The Lora DiCarlo Baci is one of the most powerful clitoral air pulse massagers I’ve ever tried — and I’ve tried many over the years.

They all work for me, but this one takes me into, “OMFG, I might need to cry afterward!” power territory. It’s a bestseller among the long-awaited Lora DiCarlo sex toys, and for a good reason!

Perhaps the most notorious toy in the lineup is the Baci’s sibling: the Lora DiCarlo Osé. Its name fittingly means bold, risqué, or indecent in Italian. Behind the Osé is a compelling backstory of an underdog tackling injustice and censorship in the industrial design world.

But the dual stimulation massager itself is expensive and not practical for most consumers’ budgets. In contrast, the Lora DiCarlo Baci actually lives up to the luxury price tag — expensive but for many, a far more worthwhile purchase than the Osé.

“Baci” means “kisses” in Italian, which gives you an idea of what this robotic sex toy does. It’s an external-only air pulse massager that blows and sucks air, ostensibly to mimic the sensation of oral sex.

While it doesn’t live up to all of the hyperbolic claims, it does blow many of its competitors out of the water while not costing much more. 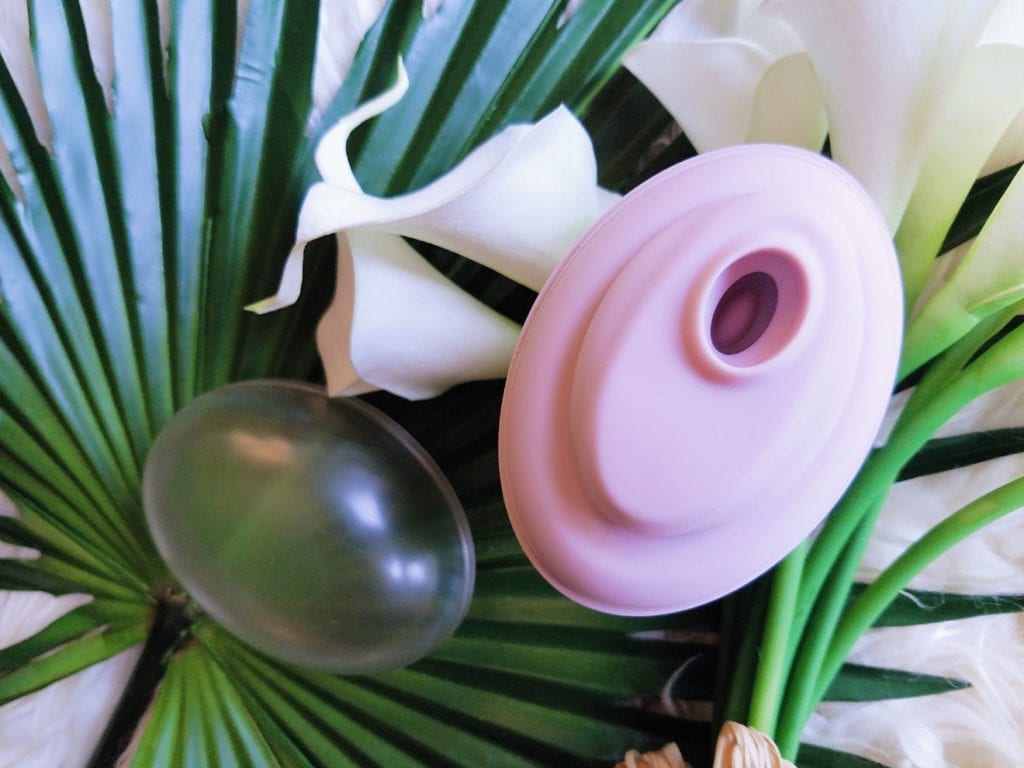 Oh, and the name doesn’t suck.1 If you like the concept behind the Womanizer as a toy, you’ll likely love the Baci by Lora DiCarlo.

In other words, I think the Lora DiCarlo Baci is beyond worth it.

However, my endorsement carries the same caveats as with any other sex toy.

My honest Lora DiCarlo Baci review will further investigate the company’s claims. I enjoy it and would readily recommend it for many people with vulvas, but I want readers’ expectations to be realistic.

How the luxury clitoral air pulse toys actually feel in use

I’m willing to set aside my frustrations about the Lora DiCarlo Baci‘s marketing because the actual toy’s motor is LEGIT. 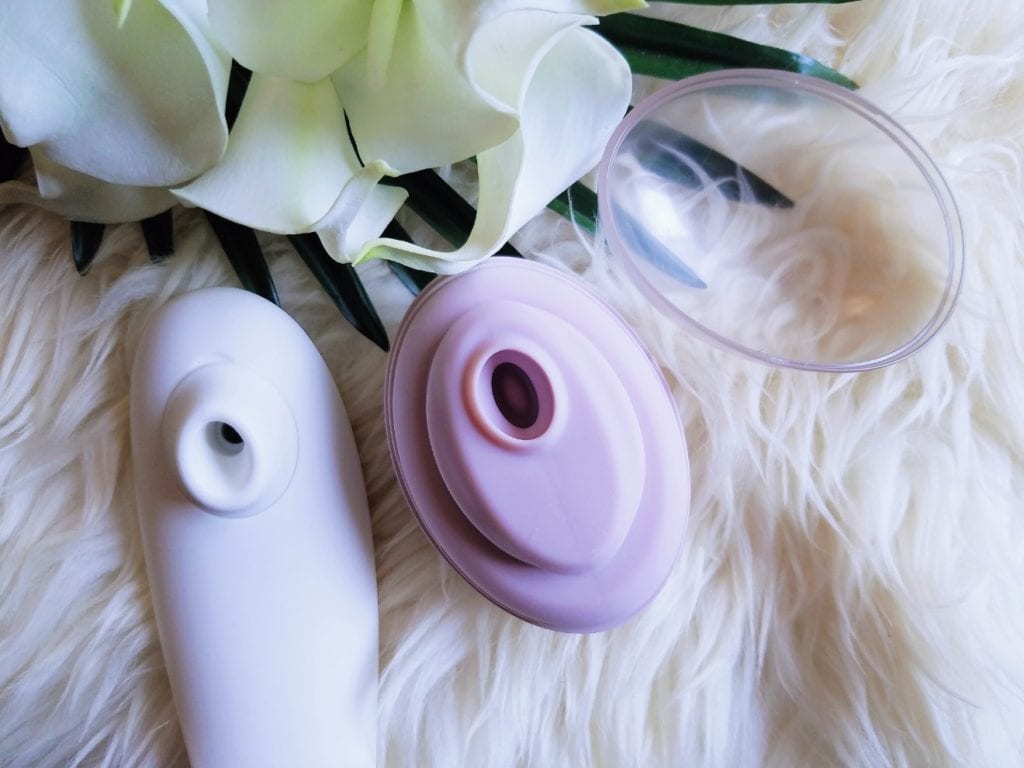 It’s not enough to say that the Baci delivers clitoral air pulse massagers more powerful than the Womanizer. You’re probably wondering how much more strength its motor has.

Update: Womanizer has released a revamped Premium 2, and it’s better and stronger than ever. The Premium 2 is far stronger than the Lora DiCarlo Baci. However, I stand by what I said about the Baci feeling rumblier at lower settings. See my guide to clitoral air pulse massagers for more details. 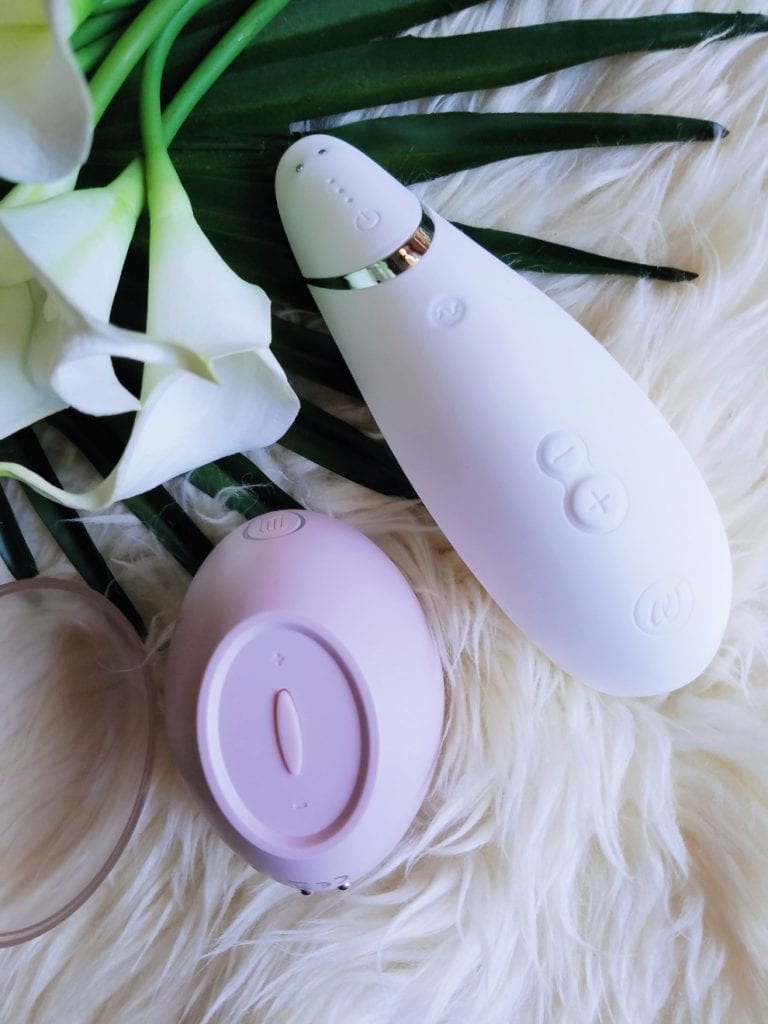 Other differences between the Lora DiCarlo Baci vs. other clitoral air pulse massagers

You may have noticed that the Lora DiCarlo Baci lacks the stereotypical shape that pressure wave toys are known for: that of an ear thermometer or pore cleaner. That can be a good or bad thing, depending on what you’re looking for.

For one, the Lora DiCarlo Baci’s flat bottom can rest against surfaces without rolling. It’s easy to straddle and press and grind your vulva against the stimulator. That is, if you’re relatively thin or have support to keep yourself slightly elevated.

The Baci’s silicone is on the firmer side, and it doesn’t have much of a “cushy” lip for comfort, unlike the Womanizers and Satisfyers. It also lacks a handle and can be a bit less intuitive to aim.

As well, I was concerned about how clunky the Baci would be to hold at first, considering how big it looked in pictures. However, its sides are tapered and nestle well into my scooped palm. I’m a VERY petite person, and it’s not awkward for me to hold at all. The models that Lora DiCarlo used are likely extremely thin, too, exaggerating the toy’s slightly-bulky body.

And not everyone will appreciate the vulva-hogging flat face. It offers some external stimulation, but I think its ability to stimulate the internal clitoris is overstated. If you want a pressure wave toy that will leave more room for penetrative play, consider a We-Vibe Melt instead. It’s not as powerful, but it’s powerful enough for me and far more versatile. 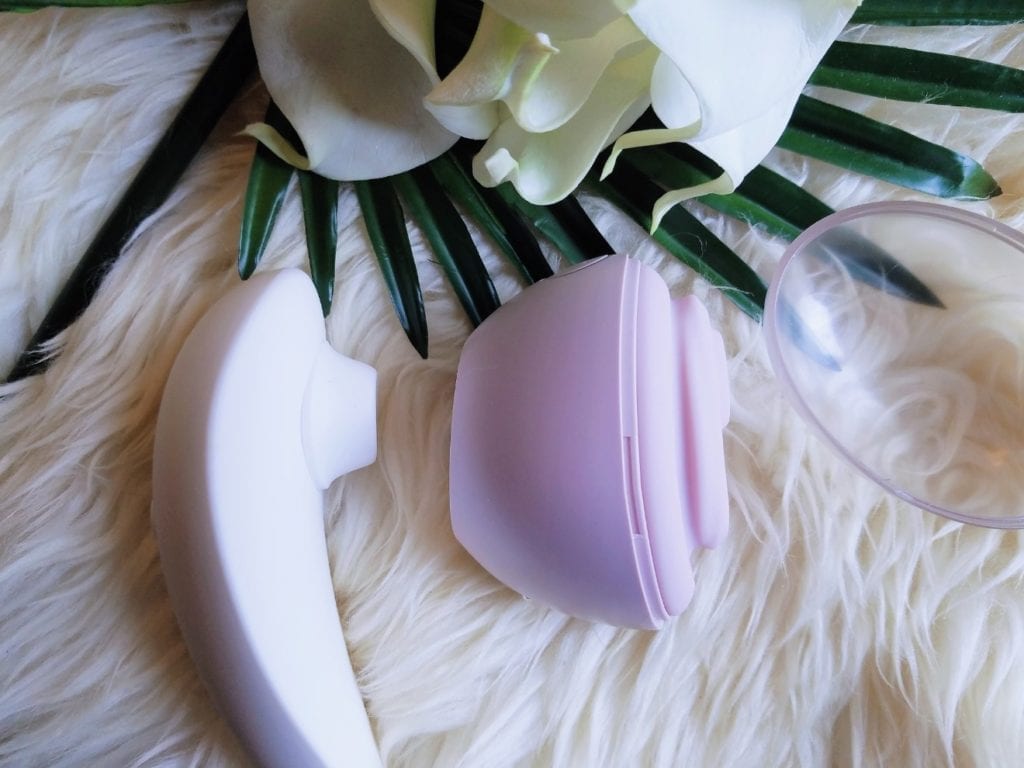 Another consideration is how big your clit is. The We-Vibe Melt’s and Womanizers’ nozzles are about 0.4″ across, whereas the Lora DiCarlo Baci‘s is 0.55″ across and 0.75″ long. As such, the Baci may be a better fit for you if your clitoral glans is a bit wider than average.

However, I’d still suggest you consider using it over the clitoral hood instead of directly if your external clit is on the long side. The Baci’s internal suction tube is a bit shorter than the Womanizer’s.

Update: My comparison guide to clitoral air pulse toys ranks over 20 of them on factors such as

The Lora DiCarlo Baci’s “mouth” is still among the widest. Find out how the others compare.

What is the Baci by Lora DiCarlo supposed to do?

Ah, let’s get to the only thing I really dislike about the Baci: the marketing. I’ll quote the Lora DiCarlo Baci specs page from SheVibe here:

Totally New Sensations – two types of clitoral stimulation combine to feel like nothing you’ve felt before, no need for vibration. 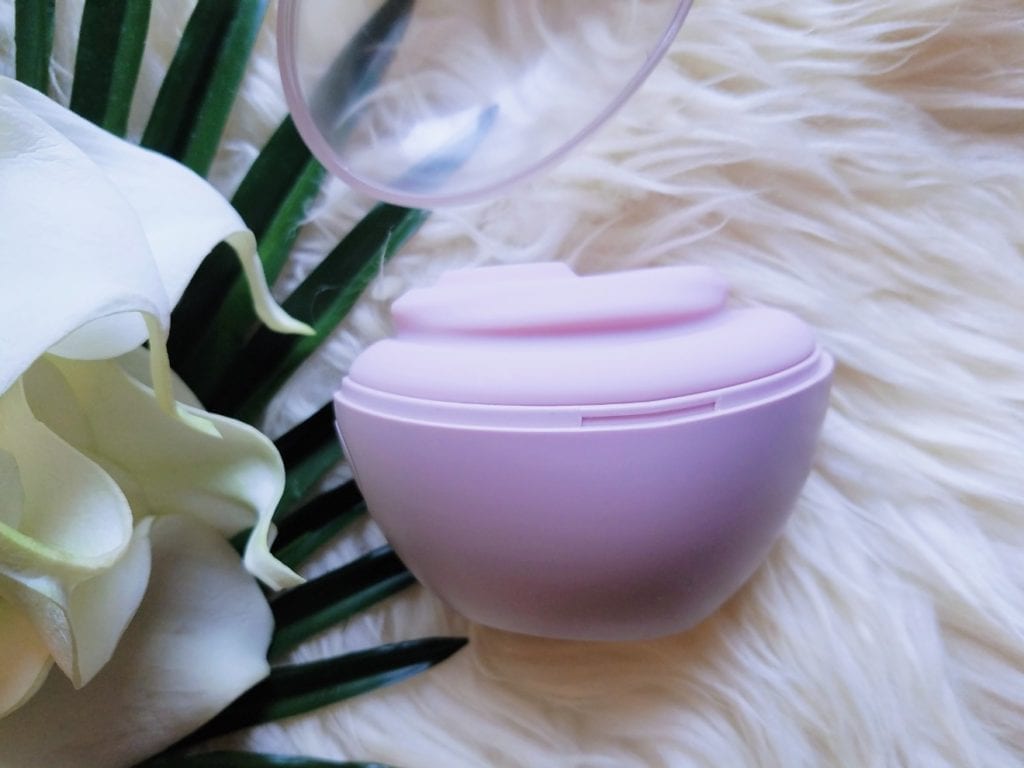 If your bullshit meter isn’t beeping yet, allow me to tare your scale.

No, there’s no super soft structure on the Lora DiCarlo Baci that can feel like lips or a tongue.

No sex toy can yet do everything a tongue can, but others like the Fantasy For Her Ultimate Pleasure and NU Sensuelle Trinitii simulate the up-and-down flicking. And they’re far more tongue-like than the Lora DiCarlo Baci.

No, the Lora DiCarlo doesn’t stimulate the full clitoris.

Like I said in my honest Lora DiCarlo Osé review, a personal massager doesn’t have to be revolutionary to be the best. Such is the case with the Baci. Could we tone down the marketing, though?

My verdict on the Lora DiCarlo Baci

The Lora DiCarlo Baci gives me some of the best orgasms out of any air pulse massager. YES, consider getting one if your clit fits in the opening. It offers a wide range of settings, from light kisses to a full-on power tool in a relatively small package.

While the marketing claims are exaggerated, a purer truth is that no other pressure wave stimulator motor I’ve tried came close to the Lora DiCarlo Baci at the time that it came out. I’m a fiend for deep penetration, yet out-of-this-world orgasms from external stimulation alone are entirely reachable with the Baci — putting it among the best clitoral massagers I’ve tried. 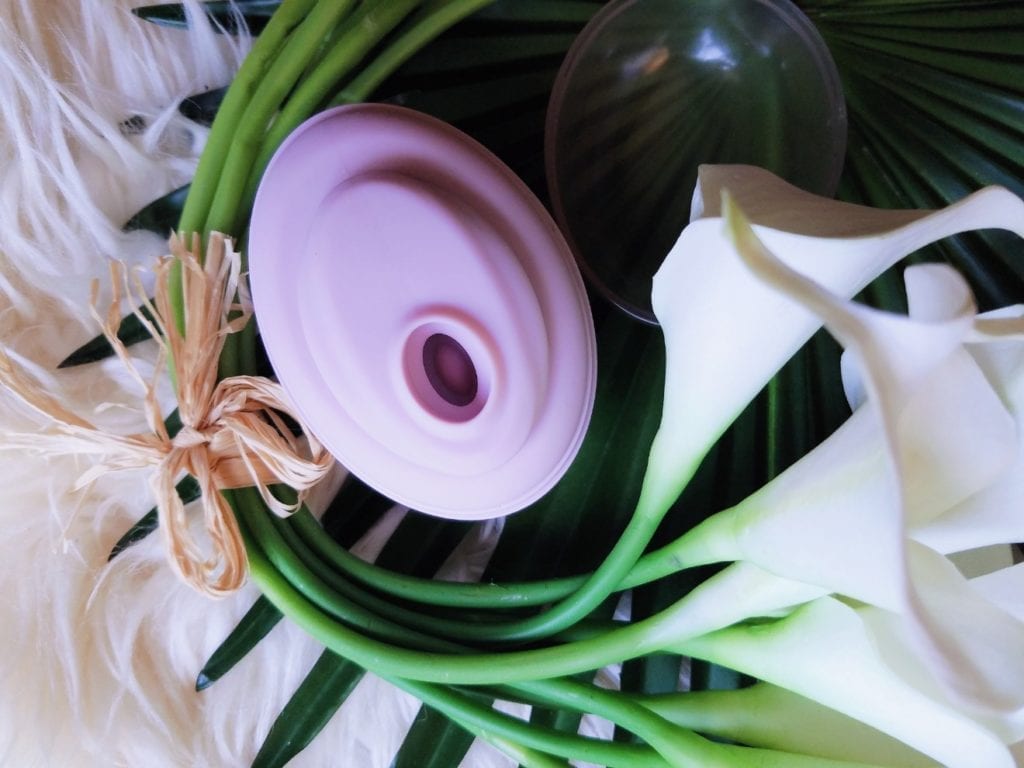 Get the Baci by Lora DiCarlo from SheVibe