Bullet vibrators are classics in many sex toy collections, with a fantastic fun-to-size ratio.

There are so many to choose from that it can be overwhelming, especially for beginners, so I’m grouping these three affordable bullets into one review.

The most bang for your buck

Talk about taking one’s breath away.  It also costs $5 less than the VeDO Bam Mini and is astronomically more rumbly.

And if you want a no-frills bullet, the Maia Jessi comes close to the fancier and far more expensive FemmeFunn Bougie Bullet. My review for the Bougie Bullet is admittedly too gentle and too swayed by its good looks. 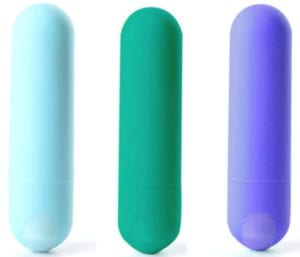 The Maia Toys Jessi is also pleasing to the eyes. Honestly, I accepted this bullet from Peepshow Toys mostly because it comes in gorgeous, less conventional colors, like emerald-green, teal, and an indigo purple.

I was not expecting its power to blow me away in use, but here we are.

Do I have anything negative to say?

The Jessi bullet has two downsides. One is that it starts at the top speed, decreases through the slower two steady settings, and then cycles through the 7 patterns as you press the button. Some people would find this control a deal-breaker. The other is that, when it’s toward the end of its battery life, the speed does drop a little.

Update: The Maia Jessi’s arch-rival would be the BMS Essential Bullet, which costs only a dollar more. It starts a bit stronger than the We-Vibe Tango’s first setting. And its speed increases when you press the button, and it comes with a travel case.

The Maia Jessi is the most rumbly of the three, but the Pillow Talk Racy is stronger at its fastest setting.

Just it’s a buzzier kind of strength. And it offers more speeds— instead of three discrete steady vibration settings and 7 patterns, the Racy has a continuous range of speeds and 0 patterns. For some users, that’s the perfect number.

A hybrid between the Pillow Talk Flirty and Sassy

This bullet can stimulate my G-spot okay for such a petite vibe, but it’s not easy when the neck is so flexible. I would be more eager to recommend it if it were rigid, which would also make it easier to place pressure on my clitoris. And the Pillow Talk Racy has enough power for me to have a prolonged orgasm. But for solo use, I’d prefer to use my Pillow Talk Sassy because it’s not as bendy.

A plus to the Pillow Talk Racy is that this petite vibrator’s curve can nestle between you and a partner during missionary intercourse.

Other quirks of the Pillow Talk Racy

Other BMS Factory vibrators to consider

If you want more rumble in a bullet, try the BMS Mini Swan Rose mini-vibe. Its motor purrs with more refined vibrations and a deeper timbre.

If you’re deciding between a Pillow Talk Racy and Pillow Talk Sassy, then HECK YES, I’d steer you towards the Sassy. It’s more rumbly than the Racy, more filling against the G-spot, and easier to aim, for a mere $8 more than the Racy. At the time, I used the Pillow Talk Sassy the most often out of all the cordless vibrators I had.

Most discreet in a makeup bag

I recommend you purchase a Gaia Eco for $10 instead, unless you’re looking for something more compact. The Revive Luscious isn’t shabby for $20 but not surprisingly good either. That’s the hardest kind of review to write.

Other affordable and rumbly bullet vibrators to check out

These mini-vibrators below cost more than $35 but under $50. I think the investment is money well spent for higher quality vibrations!

Thank you to Peepshow Toys and Blush Novelties for sending me these products to review! I use affiliate links throughout this post. When you buy via my links, I earn a commission at no extra cost to you. It helps keep my website up and running!