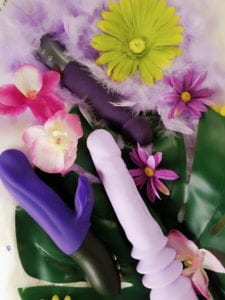 I’m so lazy in bed that I don’t even take my pants off to use clit vibes. My spoiled disposition means I’m down for anything that does most of the work for me. For penetration, the Velvet Thruster does precisely that.

It’s a self-contained fucking machine that delivers 3-inch thrusts, up to 140 times a minute. It’s not only a technological marvel but also promises the thing that Fun Factory’s Stronic Real couldn’t: deep penetration. For me, that means automatic cervix stimulation.

No disrespect— the Stronics also self-propel, but far more quietly and with a shorter stroke length. The relatively contained jiggling more precisely hones in on my internal clitoris.

But every time I inserted a Stronic all the way and turned on the self-thrusting, it would jiggle itself back to the shallower half of my vagina. And that’s not a problem per se, but it’s not the motion I imagined in my dream sex toy.

In contrast, I can aim the Velvet Thruster‘s motion as deep or as shallow as I please. Despite my cervix’s preference for short strokes, I found that the Velvet Thruster’s stroke length was generally irrelevant. At least, as long as I turned up the speed fast enough. And maintaining my hold on the box but not super-tightly.

But how do you feel about the Velvet Thruster? 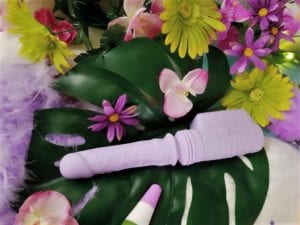 This handheld fucking machine is the closest any toy I’ve tried has come to feeling like intercourse. Sure, it’s not a human. It’s not the same as wrapping my legs around my boyfriend’s hips, but it’s pretty dang similar if I look into his eyes while using the Velvet Thruster Jackie. And that’s nice if he’s tired or recovering but I need to have something bash near my cervix.

There are ten speeds, and the fastest setting is my favorite for vaginal use. That way, the tip stays in contact with my cervix for longer. You can find a video of the Velvet Thruster’s fastest speed on my Instagram. The dildo’s flexibility means that I can tilt the shaft forward so that the tip massages my cervix, while the shaft bends against my internal clitoris, near my front wall. I can get some indirect G-spot stimulation from the Velvet Thruster Jackie, but I think deep penetration is its claim to fame. 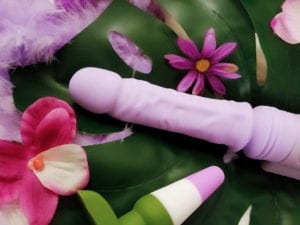 UPDATE: The new-and-improved Velvet Thruster Prime is quieter, waterproof, and has swappable attachments. PLUS there are plenty of mini Thruster Teddy options now — including the girthy Sammie and Teddy XL! 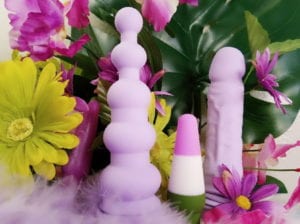 Unlike the Stronics, the Velvet Thruster doesn’t contain a magnetic weight. Instead, it works like a reciprocating saw with a barrel cam. You can watch an animation of the internal mechanism here.

If you can’t see it, understand that there’s a fast AF spinning barrel. There are diagonal grooves that wrap around it, and the attachments trace the grooves to convert the spinning into back-and-forth pushing. Think of how a screw gets pushed in the more you turn it. That’s an oversimplified description but enough to get the picture across.

And that’s why the Velvet Thruster sounds like a drill. A power tool. One of the last toys I’d recommend for discretion. But it’s a miniature fucking machine, for crying out loud. A small one with a significant range of motion. One that is both non-porous and doesn’t cost over $500.1 One that you can position at different angles and move around. 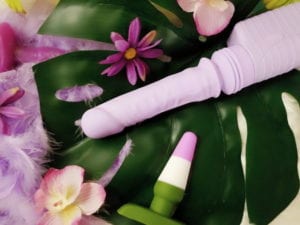 Unlike with a traditional fucking machine, you don’t have to stay in one position while your Velvet Thruster jackhammers horizontally. You can have it vertically, at a diagonal, and switch up the angling as you please. But a fucking machine turned into a handheld toy is bound to be bulky and that’s a dealbreaker to some.

The most comfortable way position for me is to place the Velvet Thruster’s box against a thick cushion, lightly wrap my legs around that, and place a pillow under my back. I can use it by holding it in my hand. However, it’s far easier to teach the right spot when you have positioning aids.

How practical is it to have a Velvet Thruster? 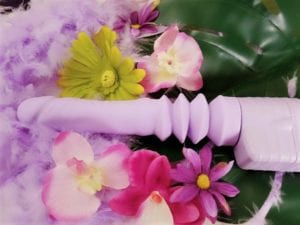 It does have its downsides, like being bulky and indiscreet. . Back in 2014, when I got my first Stronics, all of the Velvet Thruster’s cons would have been dealbreakers.

I have no qualms with saying that if I had to keep just one self-thrusting toy in my collection nowadays, it would be the Velvet Thruster. unlike the Stronics, the Velvet Thruster gives me the kind of stimulation that drives me wilder.

Overall verdict on the Velvet Thruster 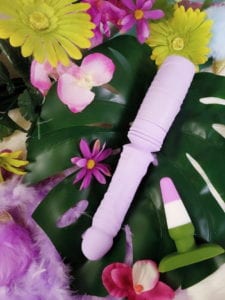 The attachments are silky-smooth, and the machinery makes the toy. Let me remind you: the Velvet Thruster can thrust up to just over twice per second. Orgasms until I’m straight up tired, independently of whether my arms are sore. That’s a major plus when you’re multi-orgasmic and think, “Well, I COULD go for another. And another. And another…”

You can treat yo’self to a Velvet Thruster at SheVibe or The Thruster. If you buy it from The Thruster, be sure to use my coupon code, SUPER10 for 10% off your order.