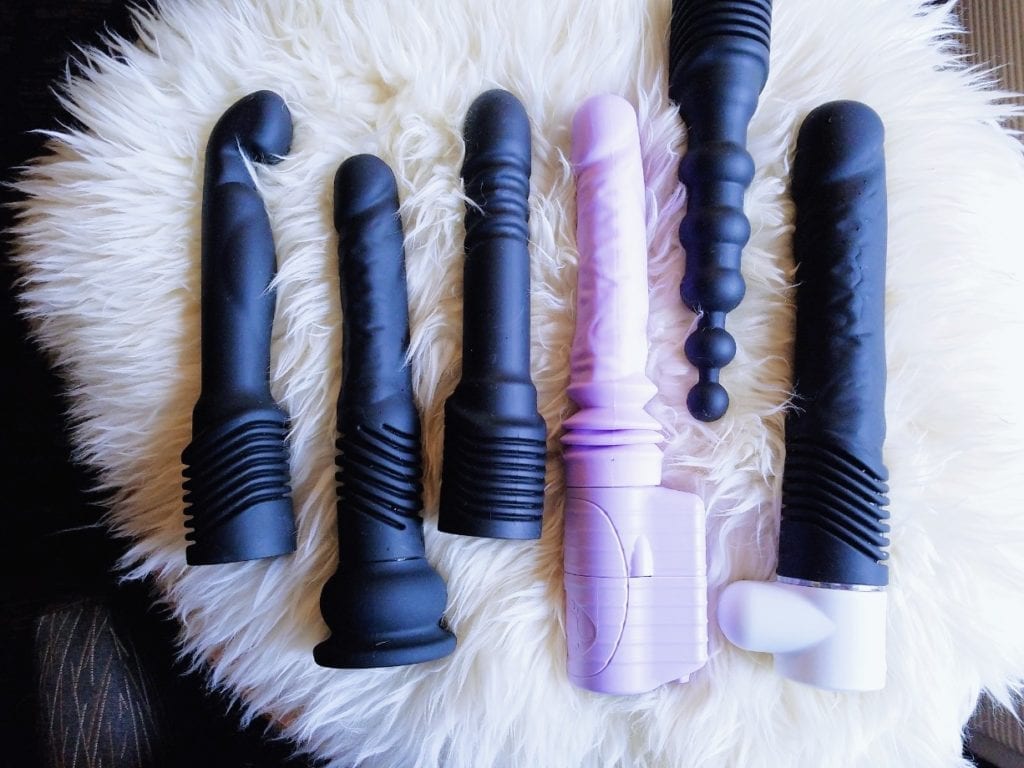 These new handheld fucking machines are bringing us: 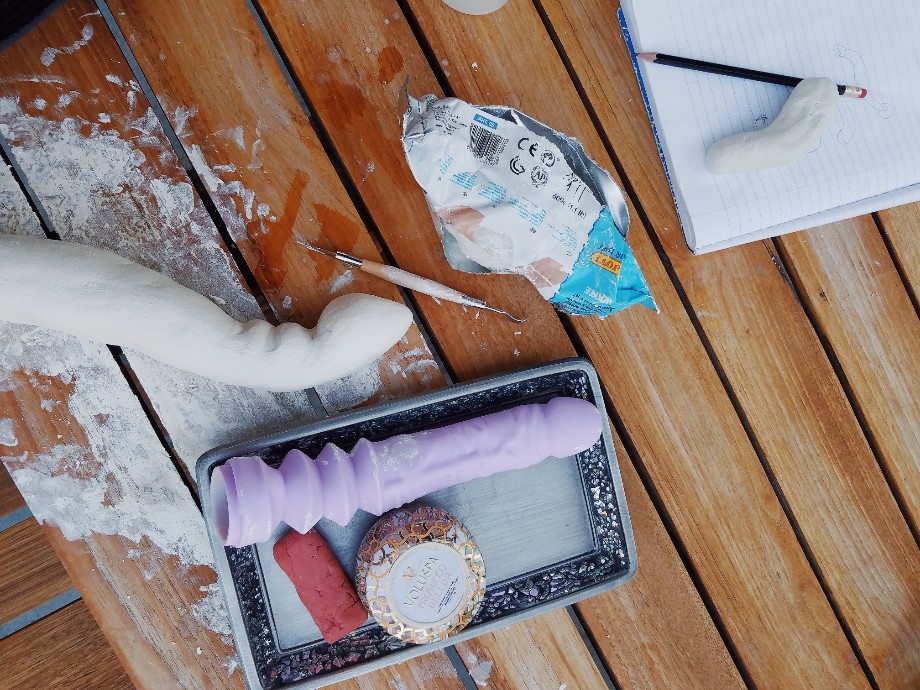 Photo from ANME 2019: Nanci and Teddy GS design in modeling clay next to old Jackie attachment

My brain is little more than confetti flying and champagne popping right now.

Both the Velvet Thruster Nanci/GS and Sammie shapes made me come within seconds. I can’t promise the same for you, but I’m upfront about how intense the sensations are. I only need four different letters, to sum up how I feel about the new Velvet Thrusters:

But you know I wouldn’t just leave it at that. There’s a lot of ground to cover in this review of the Velvet Thruster Prime, Sammie, Nanci FKA Abbey, and Teddy GS. 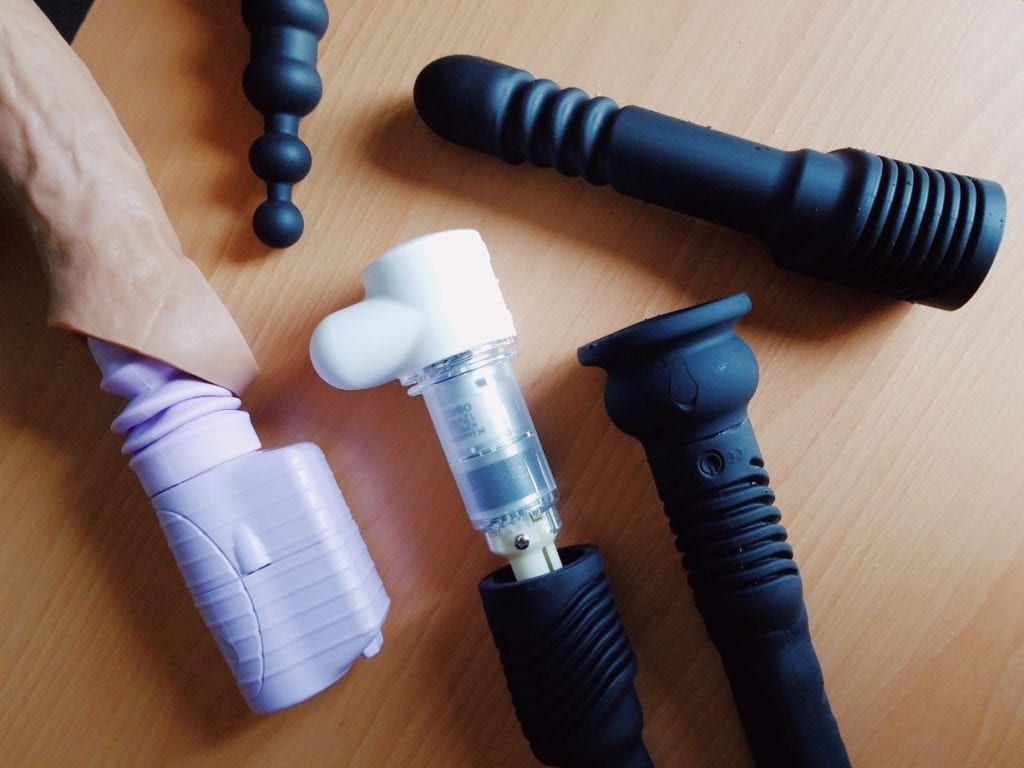 In this Velvet Thruster review hide

What stayed the same and what’s new

The Velvet Thruster Prime has entered the chat!

The makers doubled down on what I loved before and took constructive criticism seriously.

This handheld fucking machine offers a similar stroke length to the original (3″) and almost the same top speed: 136 thrusts per minute.

You get 6 settings instead of 10, though. Velvet Thruster’s most popular attachments are still available with the Thruster Prime, and of course, there are new ones! More on them later. 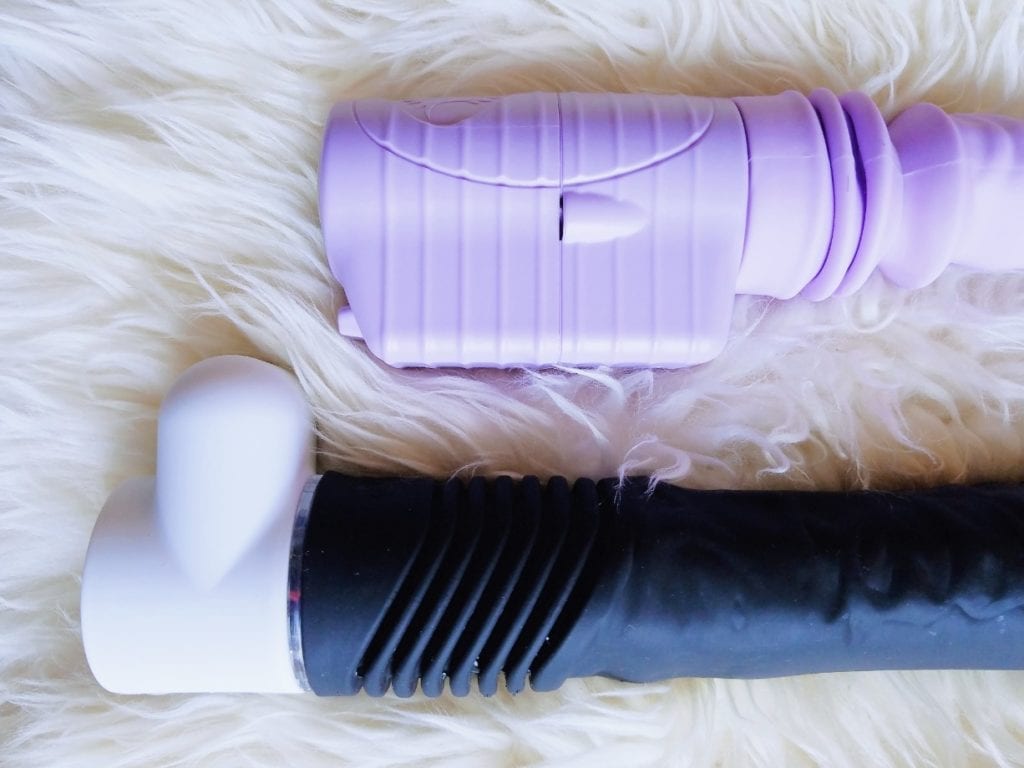 Here are all of the Velvet Thruster heads now available:

Velvet Co. considered doing the swappable attachments before, and I got a taste of it in 2018. However, the full-fledged creation didn’t hit the market until this year, baked to perfection. The fittings lock into place, snugly against the base unit’s grooves. 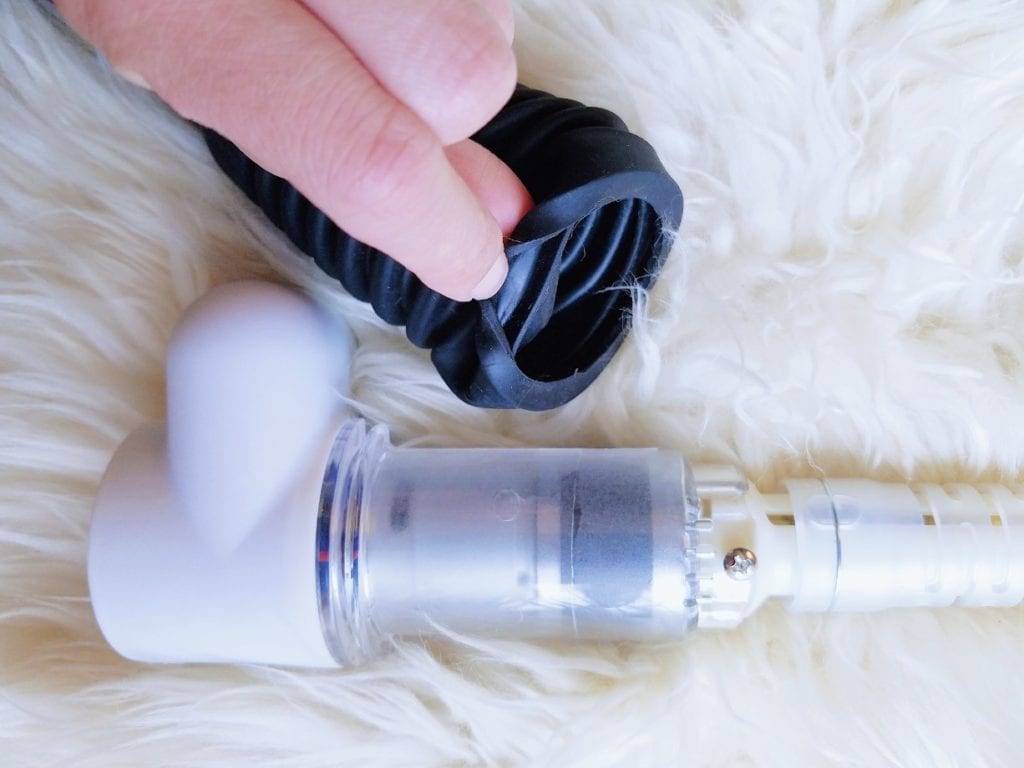 YESSSS, the Velvet Thruster Prime is quieter than the original. It’s not quiet, and its sound is still mechanical, sure. But we’re not veering into the decibel range of, “Are you drilling holes in the wall for your ethernet cable?”

The button placement is also now at the sides — and sensibly so. It used to be that the Velvet Thruster’s buttons were at the bottom, rendering them inaccessible if I propped it up against a hard surface. Not anymore, though! And it’s water-resistant, as a luxury toy like the Velvet Thruster should be.

Positioning aids screw on to the port at the bottom of the Velvet Thruster Prime: 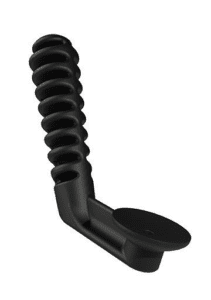 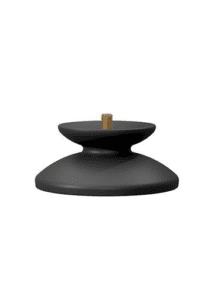 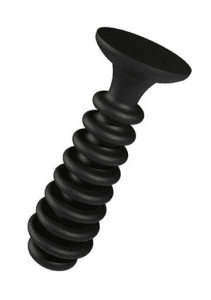 The Velvet Thruster is powerful, but because of that, it wasn’t always the easiest toy to hold.

If you don’t have hands of steel or a secure base, the handle may wag without the inner portion moving much. For that reason, I rarely actually hold it; I prefer to mount it, cowgirl-style. Not everyone is comfortable doing that, though.

The one downside, though, is that the Velvet Prime’s buttons can be a bit hard to push. I really have to dig in my fingertip and nail. 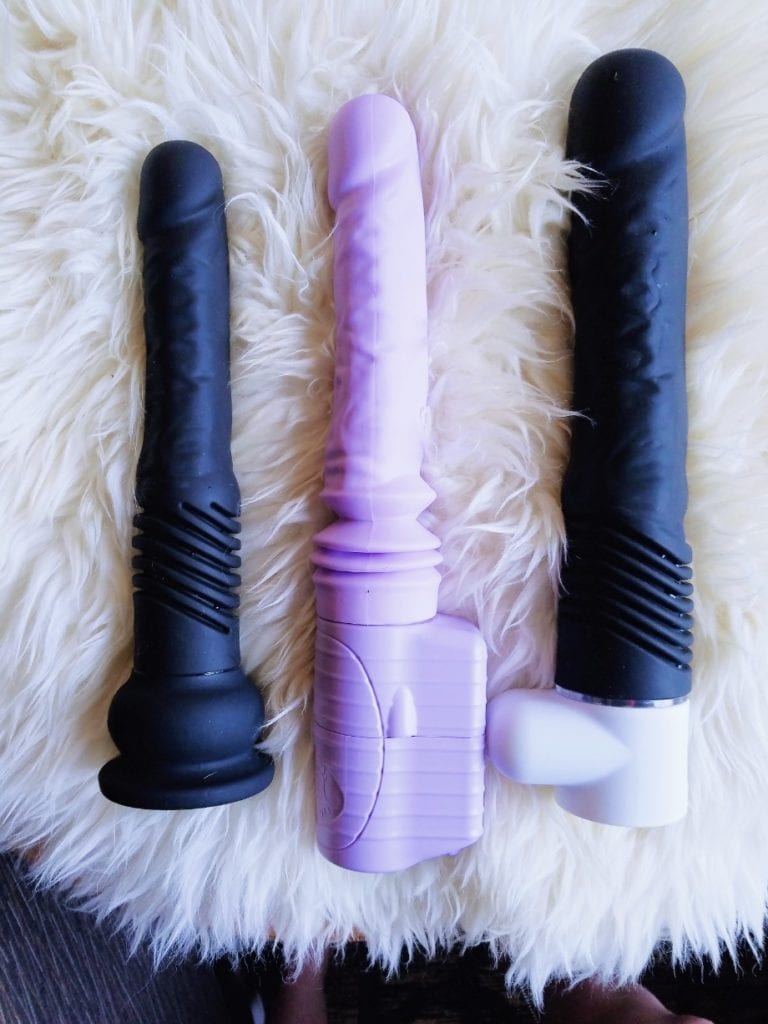 I LOVE the range of options available!

The Thruster Prime is more for people who know they absolutely want a versatile fucking machine. Its ideal user wants to invest, to try all the positions, and to have options. The mini thrusters are for those who are on a tighter budget or want to stick to one contraption. 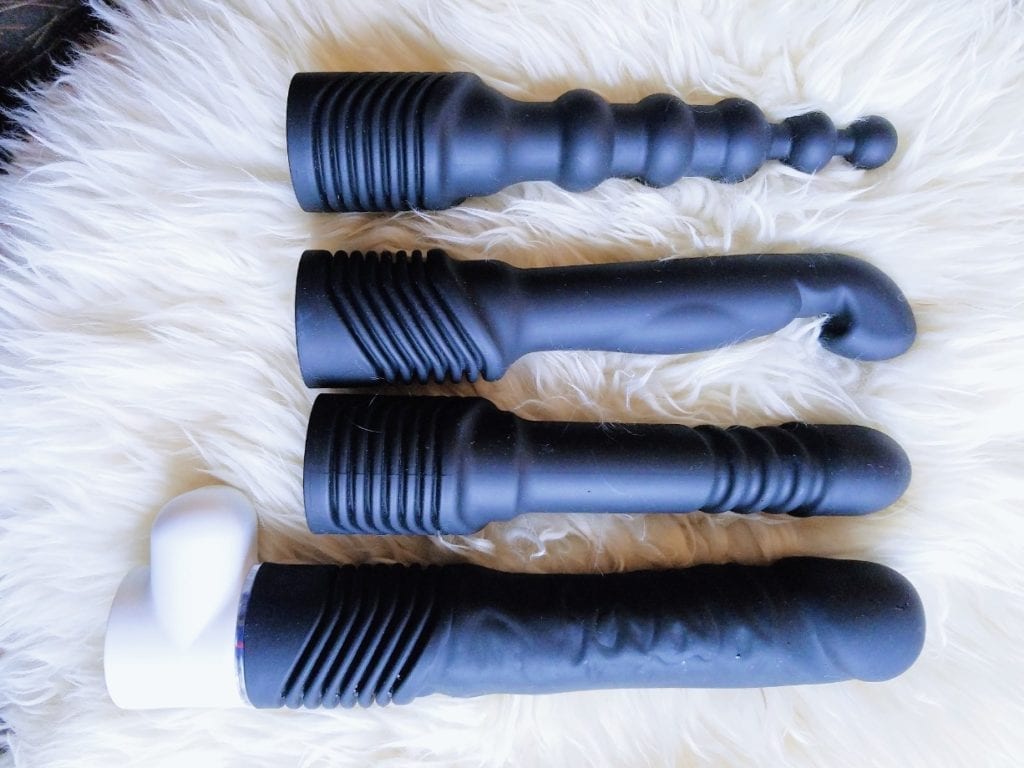 A peek at the new Velvet Thruster designs

Before the Sammie came out, I loved modifying my Velvet Thruster Teddy and Jackie with a VixSkin Colossus extension sleeve to add girth and squish. That’s an extravagant pairing, though, and not practical for the average consumer’s budget. 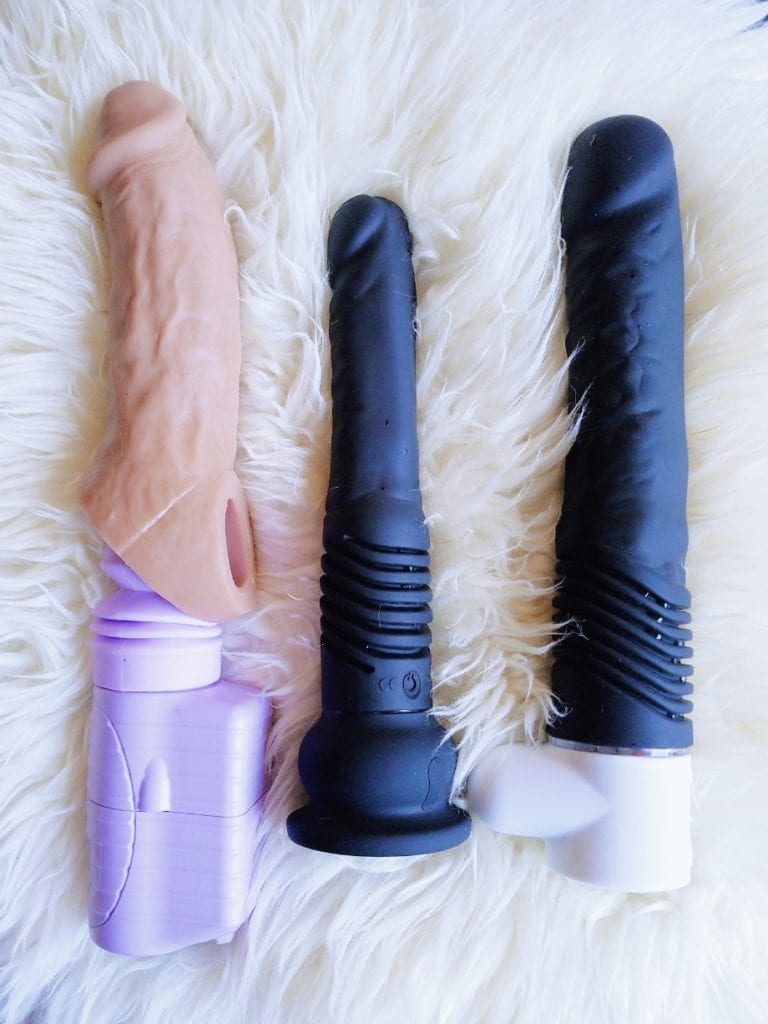 How does the Velvet Thruster Sammie feel?

With the Sammie, that dip under the corona and the veining pull at my G-spot and front wall like crazy. I come. I clench. The G-spotting is intensified. I come again nearly immediately. I clench harder.

Continue the feedback loop with ample stretching and yummy cervix massage. I’m usually a fiend for deep penetration — and get a lot of that with the Sammie — but that somehow takes the backseat. It’s dynamite for front wall stimulation, in charge with its spellbinding internal clitoral pressure.

The Velvet Thruster shop version is a bit squishier than the one I have, which is probably a plus for most users. But oh gosh, I love the Velvet Thruster Sammie’s shape. I have nothing negative to say about it.

We need a more nuanced conversation about the G-spotty Nanci FKA Abbey and Teddy GS design.

Using those Velvet Thruster models was every bit as spellbinding as I hoped. However, G-spots and pubic bones vary a lot. Let’s talk about who they are and aren’t for.

I sculpted the clay model for the Nanci and Teddy GS at an influencer consulting meet-up in July 2019.

Take a behind-the-scenes peek at the Velvet Co. meeting. 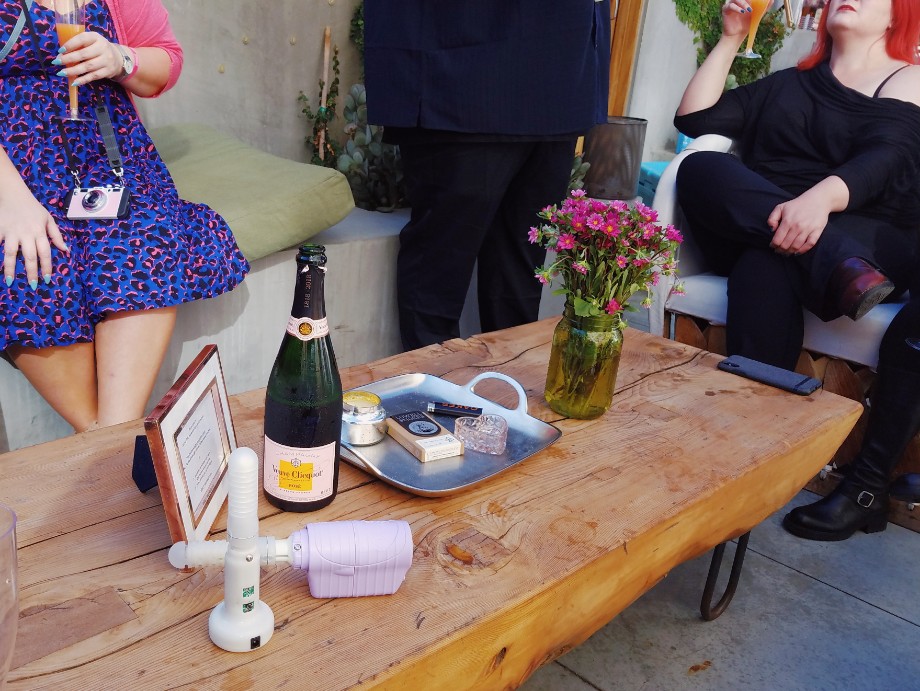 Taking inspiration from other designs I loved, I wanted a broad but rounded head. (“So you’re making an njoy Eleven?” another toy reviewer asked.) Velvet Co. 3D scanned and modified the form.

The end result deviated slightly from my original vision.

The Velvet Thruster Nanci and Teddy GS have a stronger hook and sharper, more squared-off head. Their release was originally scheduled for spring 2020 but postponed due to COVID. Fast forward and here we are!

How do I feel about the Nanci and Teddy GS?

I had my qualms about head shape until I actually used it! It’s been nothing but love ever since. 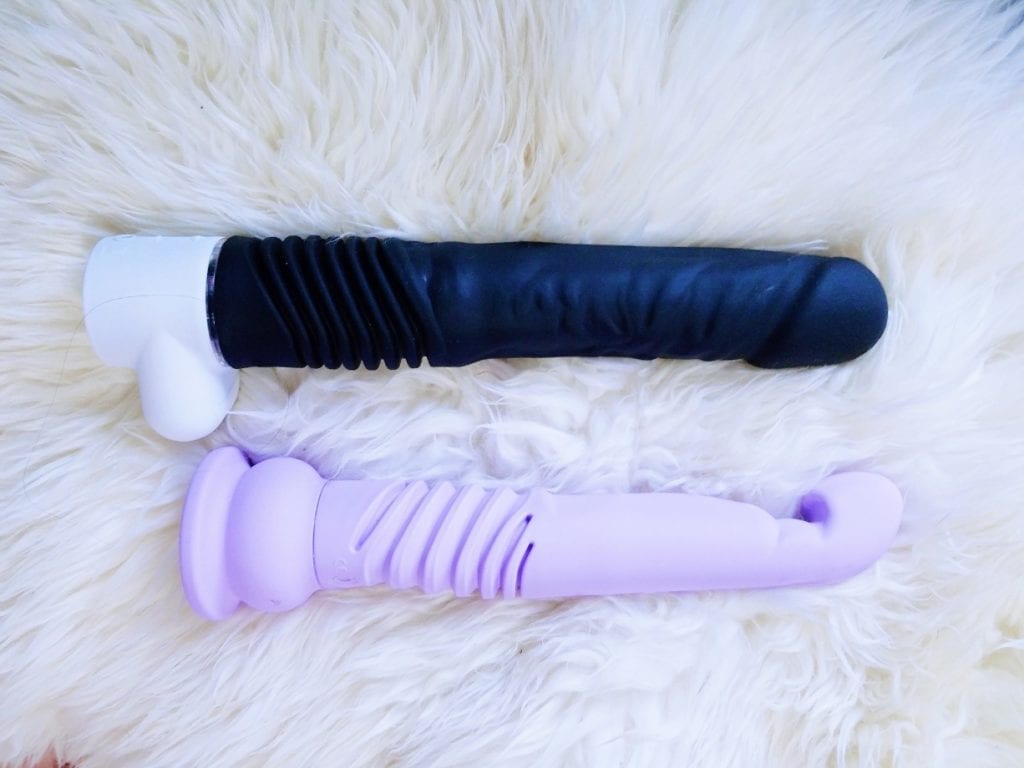 G-spot toy shapes I like tend to be rounded off — or at least bendy to get into my pubic bone’s dip and rub the most sensitive part of my front wall.

Flat and square G-spotting heads are super common in Toyland — much to my dismay. While many other reviewers adored the likes of the LELO Ella, Picobong Moka, Blush Wellness G Ball, and Fun Factory Stronic G, none of those worked for me. They aimed too far past my pubic bone, missing my G-spot. Most of them are too firm and restricting, especially if their shafts are steeply curved.

The key to the Velvet Thruster Teddy GS and Nanci FKA Abbey’s success is in their flexibility. 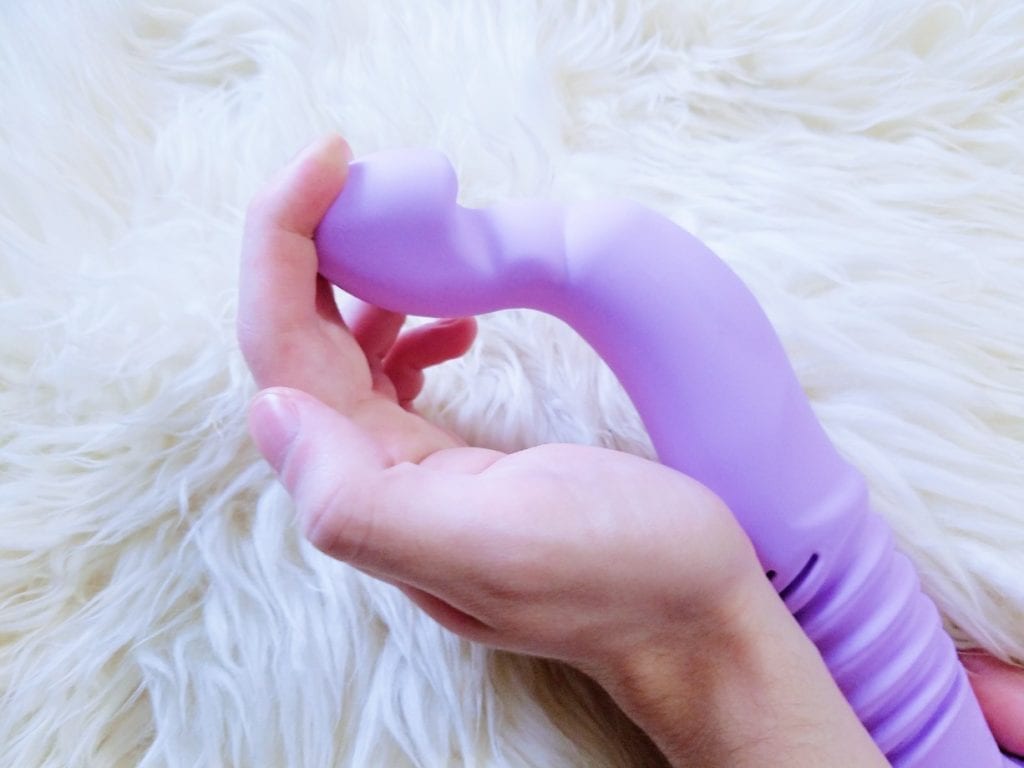 Plus, the flexibility means plenty of options for aiming. That includes turning the Velvet Thruster Teddy GS or Nanci backward for cervix or perineal sponge stimulation. I prefer the slower speeds for my G-spot and the faster speeds for deep penetration to maintain contact with my cervical os.

I adore that I get pinpoint AND broad stimulation in different spots. The rounded part of the tip pushes, the flat face kneads, and the sharp hook pulls.

The Stronic G, in contrast, doesn’t bend as far back. 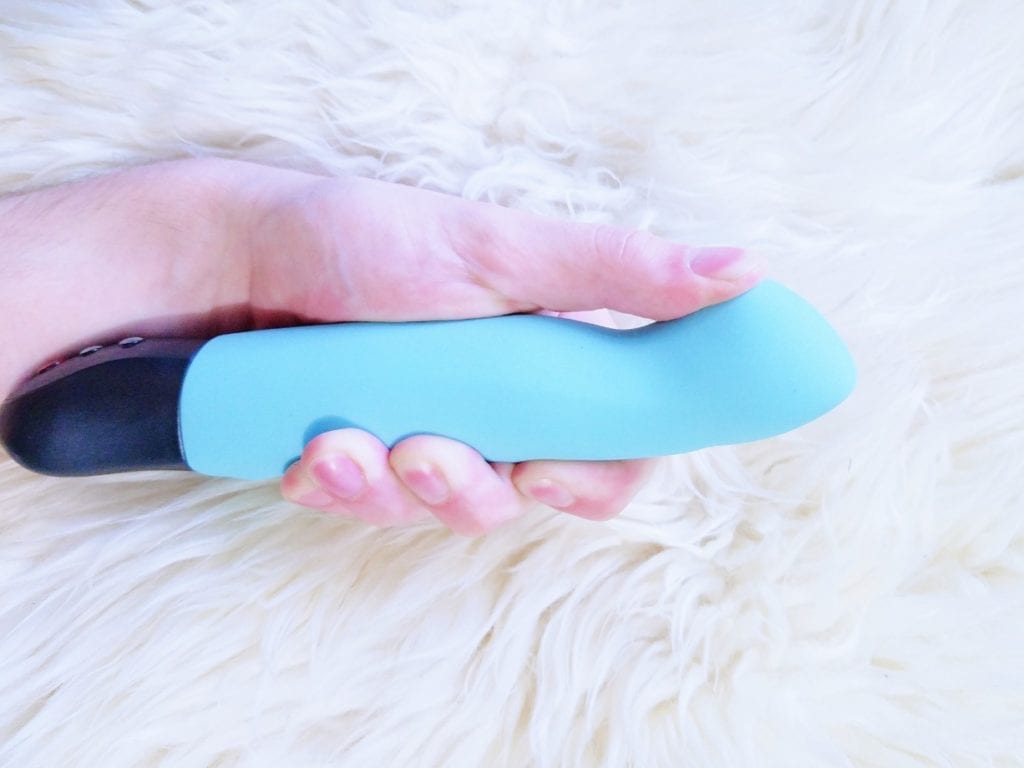 I swear, my BF tried to bend it back. It wouldn’t go much farther, though.

Just 1″ or so of the boxy head is silicone and not so much the shaft. It’s silicone-coated, but you can easily tell where the hard plastic shell is under it. The jiggly magnetic thrusting can’t push the Stronic G’s head against my pubic bone as hard as I’d like.

Don’t get me wrong — the Stronic G is powerful, but its half-inch strokes and square tip don’t jive with the boniest part of my vagina. (I like the Stronic Surf a lot, though, since its shape fits more neatly against my wall. And the Fun Factory SUNDAZE uses the same technology for external stimulation.)

Velvet Thrusters, meanwhile, use a barrel cam mechanism for longer thrusts with more “oomph”; they’re half a step short of power tools.

The result? Velvet Thruster’s Teddy GS and Nanci feature a strong shape in a springy material — a sensible middle ground between yielding and forceful. 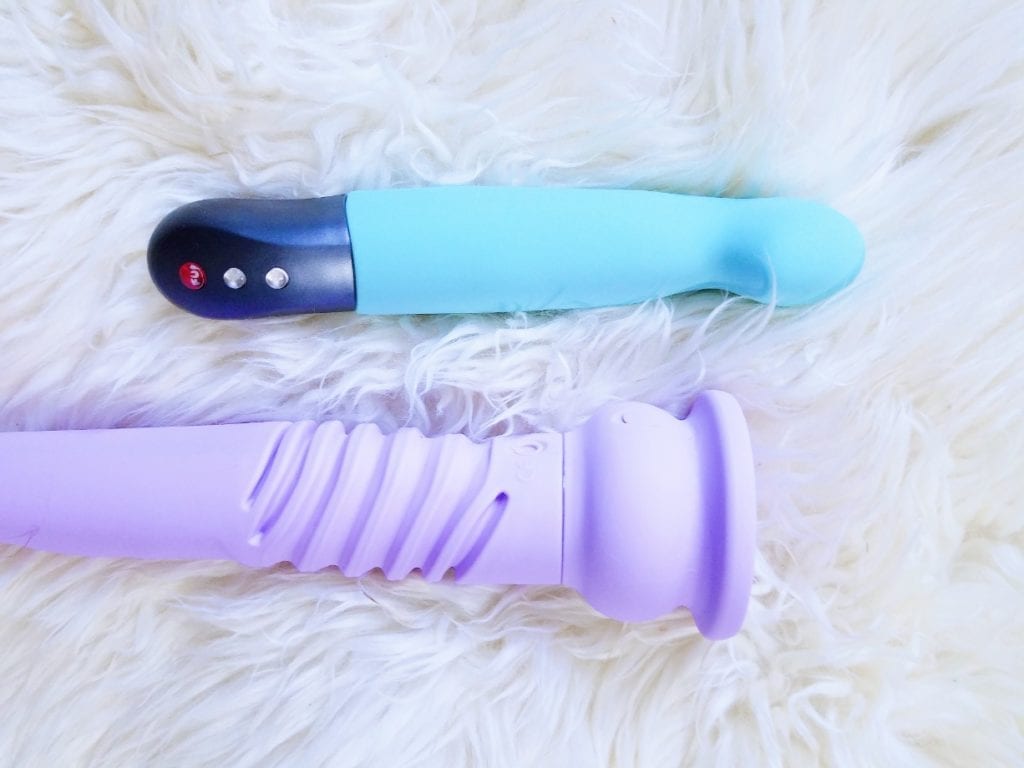 My verdict on the latest Velvet Thruster models

If it’s the intensity you seek, the new Velvet Thrusters may be just the thing.

As for the Velvet Thruster Abbey and Teddy GS, they’re everything I hoped for in use, but they’re not for everyone.

It’s a trade-off; I like feeling the sharp hook pulling inside me, but not everyone does. 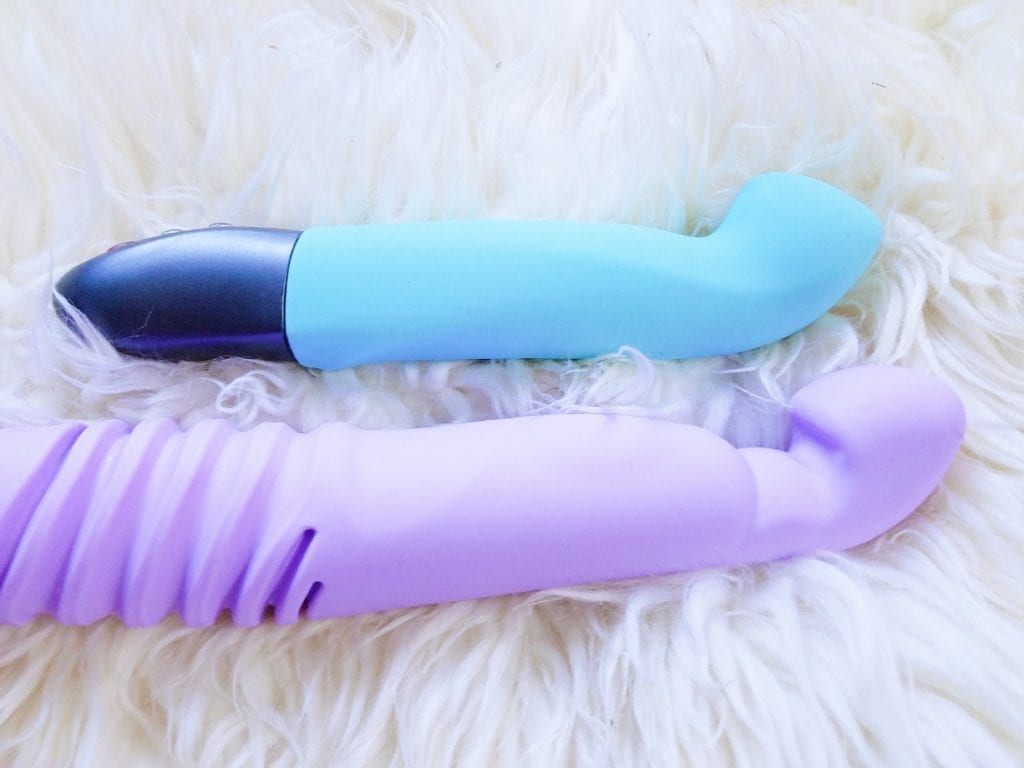 The Velvet Thruster Teddy GS and Nanci are not those who want subtlety. Nor is the Sammie.

But if you’re internally screaming, “YES! GIVE ME MORE!” you’re in luck. Velvet Co. has distilled its intoxicating essence into something even more formidable and fuckable.

Take 20% off the Thruster with discount code SUPER20

You can use this code any time — even when there isn’t a sale.