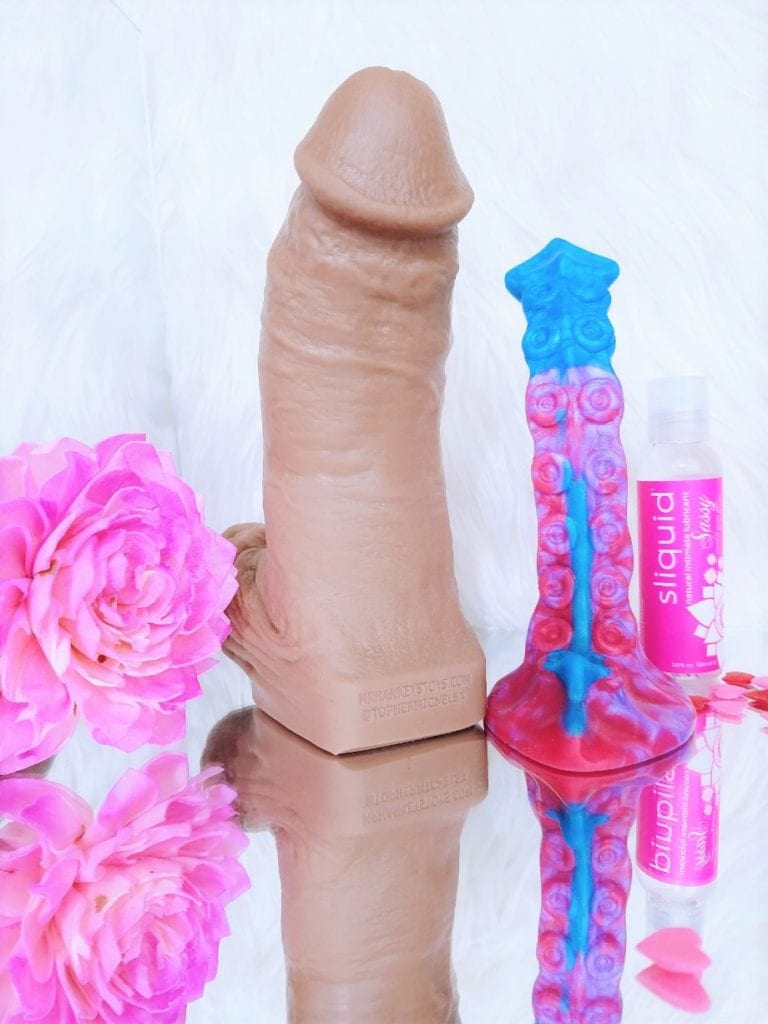 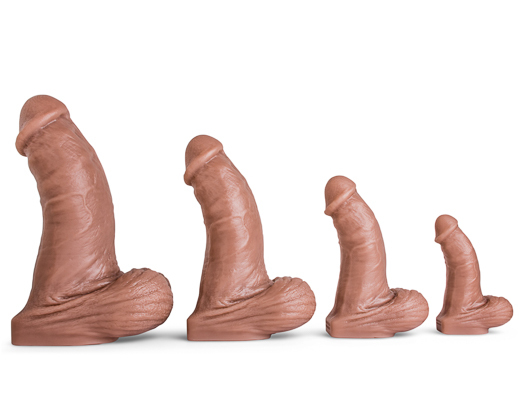 The manufacturer sells the Topher Michels in 4 sizes, — 3 of which Peepshow Toys stocks.

Topher Michels’ actual penis, though significant, isn’t quite the beast that Mr. Hankey’s Toys’ “medium” is.

(Fun fact: a friend of mine once hooked up with a guy whose dick is the same size as the Topher Michels medium. The dude was 4′ 5″. As in, FIFTY-THREE INCHES tall. Talk about having three legs…) 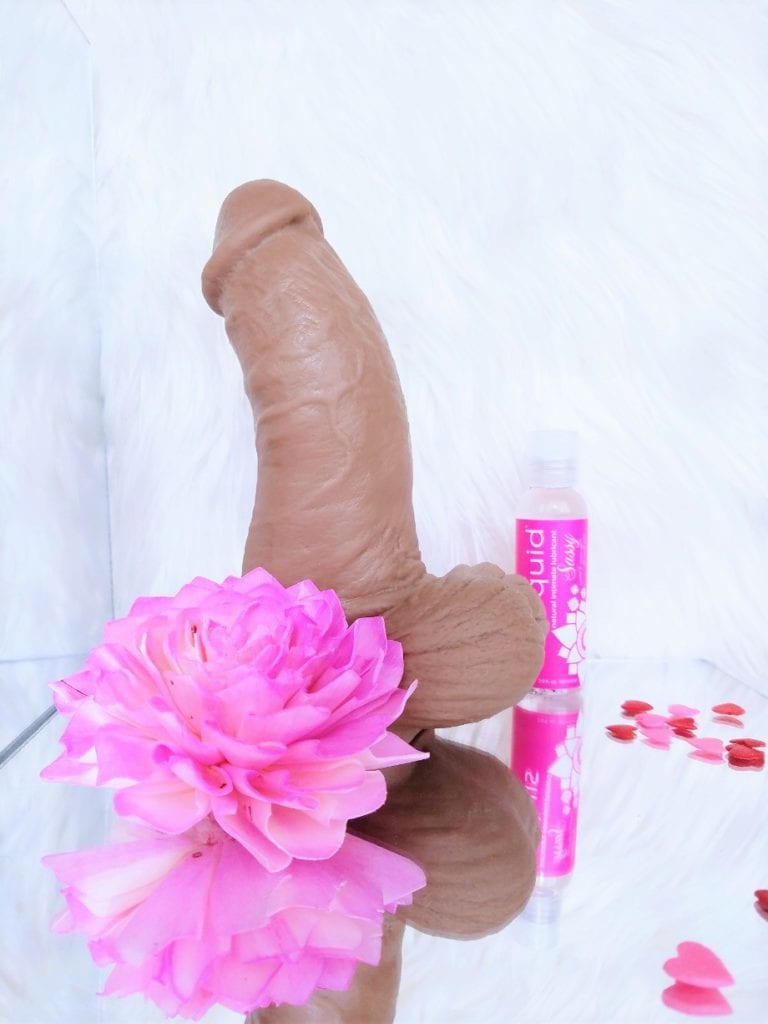 It’s literally larger-than-life. Mr. Hankey’s Topher Michels is more like photos on a cereal box with the fine print, “Enlarged to show texture.”

Hooo boi, even on the tactile level, there’s a lot of texture! There’s so much skin-like surface grain and veinage, especially highlighted by the glossy silicone surface.

From a structural standpoint, one of the most noticeable traits (besides the balls) is the engorged head. The corona on Mr. Hankey’s Toys’ Topher Michels doesn’t only flare out — it’s sharp and curls slightly upward on the dorsal side. Combine that with the curved shaft for the seriously targeted stimulation that my G-spot sometimes craves. 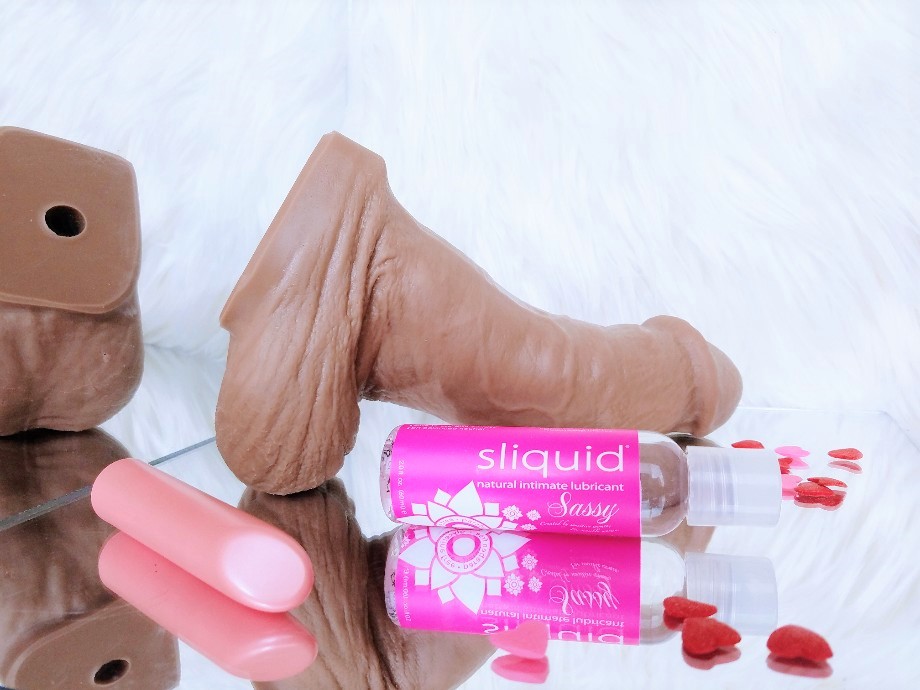 To maximize pleasure with it, I like inserting the Blush Exposed Nocturnal bullet inside the Vac-U-Lock/Lock-On hole, which is slightly bigger than the “standard”-sized We-Vibe Tango.

One would think that the Topher Michels dildo’s THICC, squishy silicone dampens the vibrations, but the Exposed Nocturnal packs such a punch that it doesn’t matter. I can still come by holding the bottom half of the vibrating dildo’s shaft against my clit.

As far as big vibratables go, the Topher Michels and Exposed Nocturnal pairing is one of my favorites, maybe second only to the (far firmer and rumblier) Swan Wand Classic. 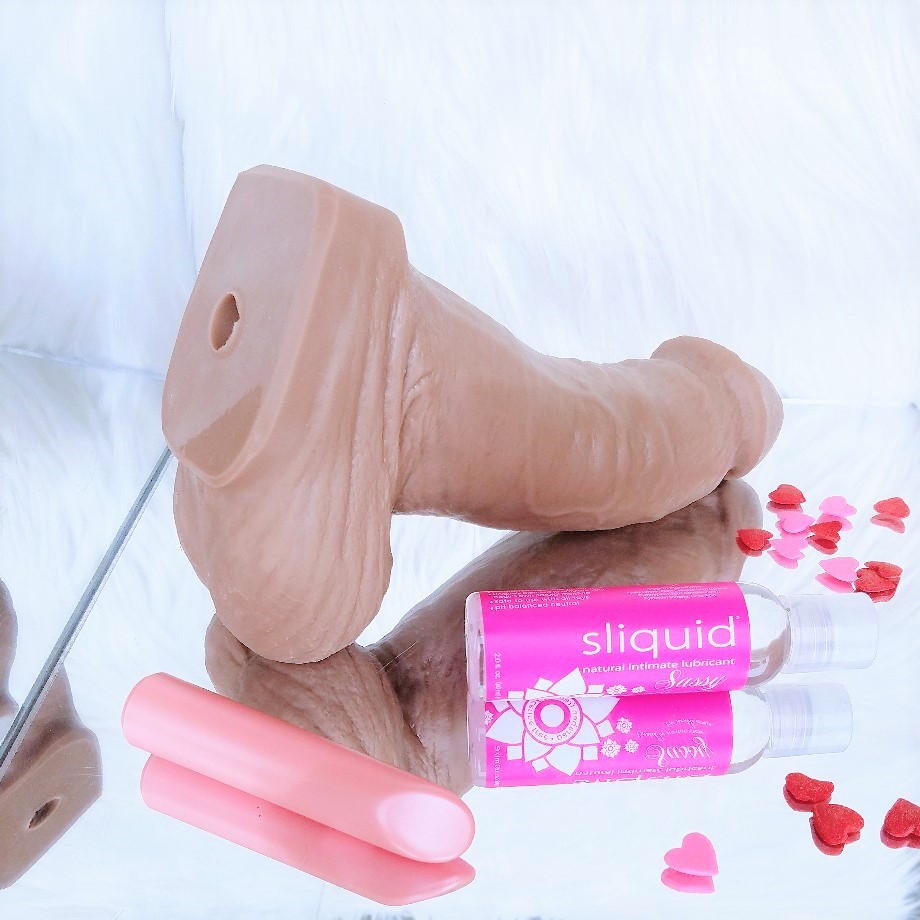 (Myself, I’m not a fan of how the lube drips on them and gets all over my butt.) 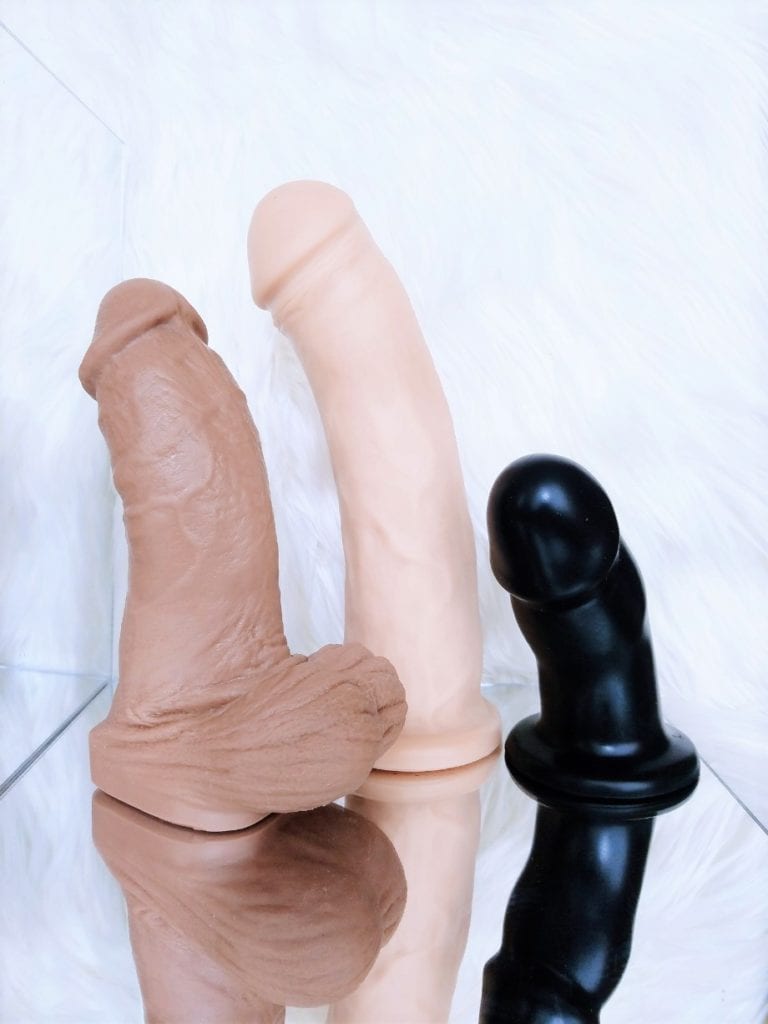 What do the following scenarios have in common? 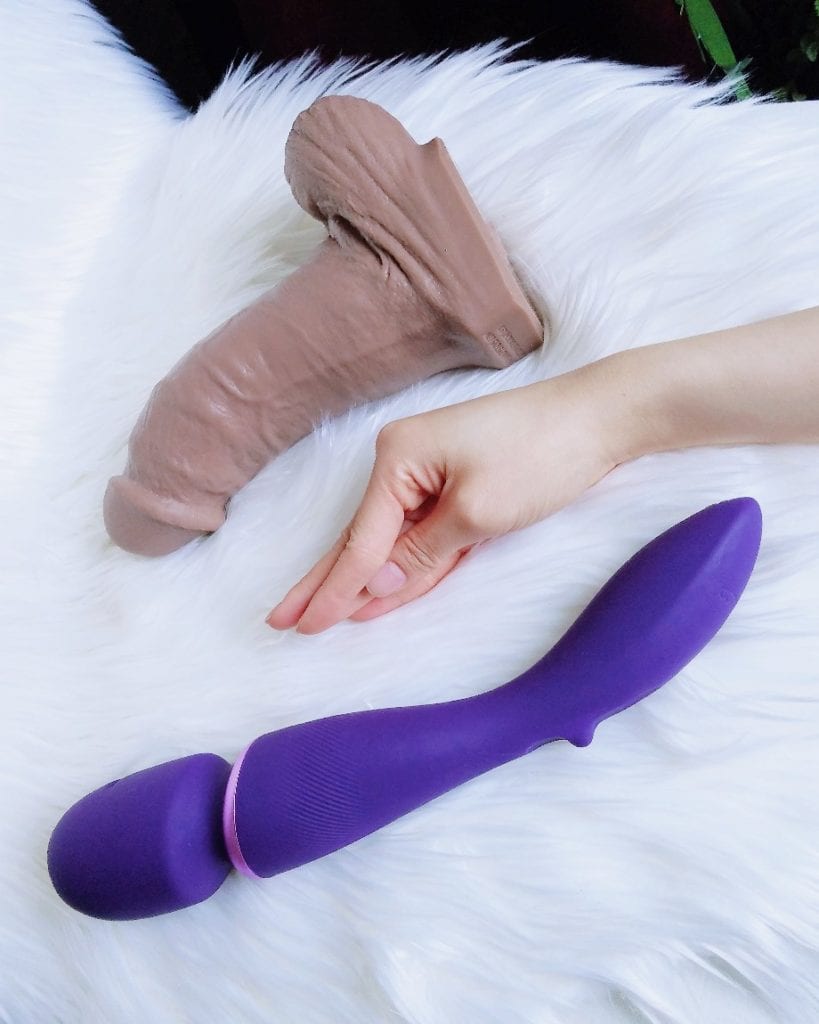 The first two attempts, I seriously couldn’t fit the Hankey’s Toys Topher Michels medium inside me. It hurt too dang much.

At the time, I had used the suuuper-squishy VixSkin Gambler before but not the Tantus Bishop or Fist Trainer. While Mr. Hankey’s soft silicone could be used in stress balls, it has nothing on VixSkin’s outer-layer pliability.

Be realistic about what you can handle. I enjoy using the medium Topher Michels’ firmness for intense and overwhelming G-spot stimulation, but inserting it all the way isn’t for the faint of vagina. It takes dedication. 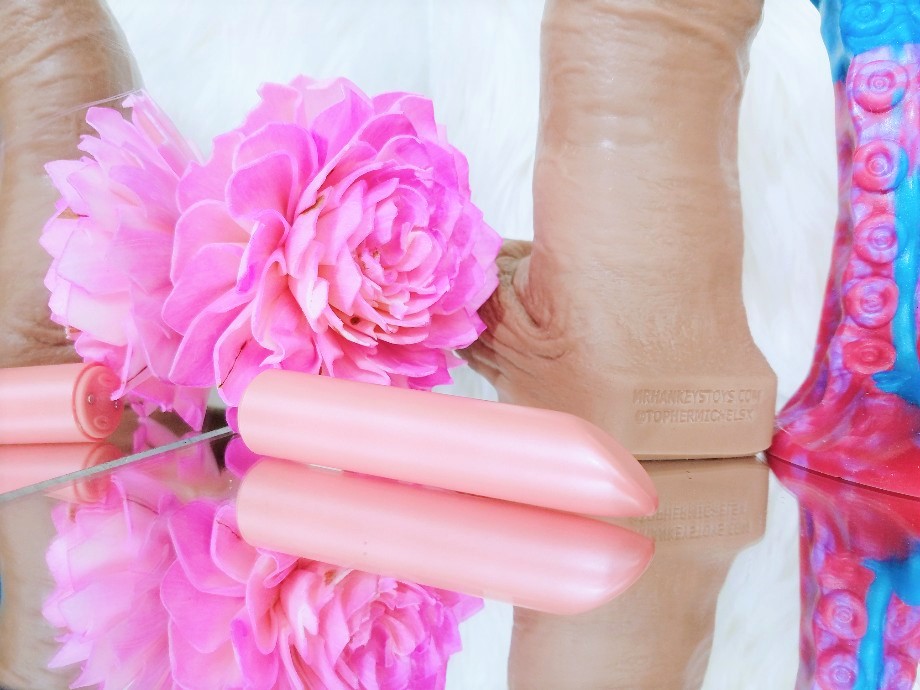 Until my boyfriend comes over and his fist remixes my guts, my walls are ready to C R U S H the Mr. Hankey’s Toys Topher Michels.