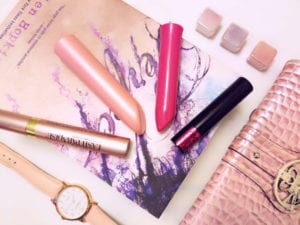 “How fucking dare you compare a $29 bullet1 to the Tango?” screech the connoisseurs among you.

Lest you revoke my sex toy reviewer card, there is a drawback. The Blush Exposed Nocturnal bullet’s highest speed is stronger than the Tango’s. However, its pitch isn’t as deep… among other differences that may or may not be deciding factors to you. 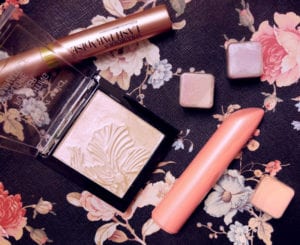 On its first steady setting out of 5, the Exposed Nocturnal‘s vibration speed is somewhere between the Tango’s 2nd and 3rd speed. If the faster vibrations sound like a dream, then the Nocturnal bullet will delight you. And that’s for not even half the cost of the Tango.

Using it directly on my clitoris is unthinkable to me. Unlike the Tango or Pillow Talk Sassy, the Nocturnal bullet doesn’t leave me with much of an option for ramping up. I’m a lazy masturbator who rarely takes her underwear off for clit-only jack-off sessions. And I still often find myself using just the Exposed Nocturnal’s first speed with light pressure so that I don’t get overwhelmed.

The Nocturnal also has 5 patterns, but I find them either too high-pitched or not the right rhythm to do much for me.

A perk of the Nocturnal bullet 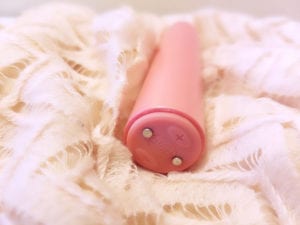 There’s a significant feature that makes me like the Nocturnal bullet a little more than the Tango: the Nocturnal HAS. TWO. BUTTONS. One for turning the speed up and one for turning it down. For me, speed control is a big deal because it increases the likelihood of multiple orgasms.

If I’m using the Exposed Nocturnal through enough of a buffer, I can use the second (or third!) setting, orgasm, immediately turn the speed down, and back up as the next orgasm builds. And repeat. With the Tango, I’d have to press the single button 8 times to go down a speed. That’s a potential mood-killer and not very convenient— for the most part, my orgasms with the Tango are one-and-done.

It’s not all sunshine and rainbows, though. The Exposed Nocturnal‘s buttons aren’t easy to distinguish from each other by feel alone. I can consciously recall that the pointy tip lines up with the + button, but that’s hardly something I’m thinking about when I orgasm. If I increased the speed when I meant to decrease it or vice versa, though, it’s easy to fix my mistake.

Nocturnal vs. Tango: other differences

Aside from rumble and controls, the Nocturnal and Tango bullets differ in other ways: size and noise. 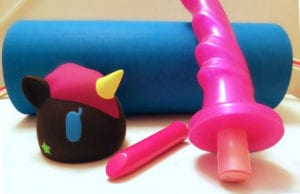 The Nocturnal bullet inside Tantus Tsunami. Shown next to We-Vibe Tango.

The Exposed Nocturnal is also louder than the Tango. You could probably get away with using the first two settings in the shower behind a closed door. I can’t otherwise recommend it for someone who wants a quiet and discreet sex toy, though. Blush’s Nocturnal bullet isn’t an appropriate substitute for the Tango in all aspects, but it does come close.

So let’s go back to the claim that no other bullet’s power compares. As far as the absolute level of power goes, I’m inclined to agree. Blush Novelties’ Exposed Nocturnal is the most powerful mini-vibe I have ever come across. And because of the two-button control, I’ll almost certainly use it more often than the Tango.

If you’re willing to sacrifice some speed to get deeper vibration, however, you’d be happier with the We-Vibe Tango‘s range of motion. It comes down to how picky you are about the type of power you use.

…know that the folks at Peepshow Toys weren’t fucking around when they said that the Exposed Nocturnal is very powerful. It’s not that I thought they were lying— I didn’t expect a $29 (with coupon code SUPERSMASHCACHE) mini-vibe to be one of the best vibrators I’d ever tried.

Thank you, Peepshow Toys for sending me an Exposed Nocturnal bullet in exchange for my freely given and honest review! As always, I only say what I consider to be the truth. Even if it goes against the grain. Including if I wanted to like a toy. And also if it straight up sucks.

If you want to see more writing in the future, you can support Super Smash Cache by buying me a coffee or by clearing your cookies and then buying sex toys through my links. My affiliate links bring me a commission at no extra cost to you. You might even save a little money!