Imagine the mini-heart attack when my mom not only insisted on coming with me to pick up the parcel but also asked the post office clerk what was in it.

Luckily, he misread the sloppy handwriting and read aloud, “health care goods.” I told my mom it was fancy vitamins and skin care because that would explain the contents’ cylindrical shape.

These weren’t all my first three sex toys ever, but they were pivotal to my sexuality.

For one, glass is a very affordable, body-safe material— perfect for health-conscious teen’s budget. It’s pretty hard to fuck up the body-safe quality of glass, even if you buy it super, super cheap. In contrast, shitty and porous products are often mislabeled as silicone, so I found cheap “silicone” harder to trust.

And no, the glass didn’t hurt. At 1.5″ wide, it was big for a first-timer, but the glass is slippery, and I found it more comfortable than the drag of silicone.

I felt a combination of pleasurable pulsating and almost like I had blacked out for a split second, and I knew without a question that it was my first cervical orgasm. 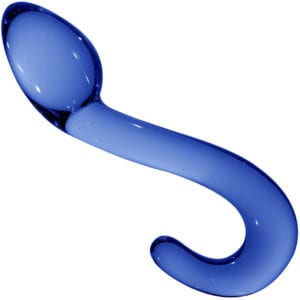 What I’d recommend now: Icicles No. 53 or Chrystalino Champ

If you want something smoother and flatter to more easily slide behind the cervix, consider a Chrystalino Champ instead.

At age 19, I still had some weird AF hang-ups about my sexual response. Deep down, I believed that vibrators would desensitize my clitoris, and I avoided them externally.

Frankly, the Scarlet G’s shape frustrated me when I first tried it. I didn’t understand that G-spot toys don’t necessarily do all of the work for you. Even if you already know where your G-spot is, there’s still a learning curve as you figure out the best way to aim a toy.

The power increase is a very welcome upgrade! It’s more rumbly, meaning that the vibrations are deeper. You know that pinchy surface-level irritation from cheap vibrators sometimes bring? Yeah, the Blush Noje G Slim’s power doesn’t do that, and it satisfies me much more quickly.

Whereas the Scarlet G was just good as a beginner vibe, the Noje G Slim is awesome. Full stop. Even after trying plenty of other vibrators. It actually reminds me of the ultra-powerful Blush Exposed Nocturnal. The G Slim has the same controls, cord, and satisfying rumble, but with a broader head and a longer handle that’s more comfortable to hold.

With some tilting, the vibrations feel great on my G-spot. However, I now recognize that because the bulbous head is so elongated, it’s not a very direct or precise G-spot toy.

3 Fat purple jelly dong: how I discovered the sex bloggersphere

Luckily, I only used this toxic toy once before someone found it and threw it away. Basically, I had built up a HUGE following on FetLife2 and started having subby internet guys buy me gifts. I felt weird asking for expensive toys, so I put a bunch of jelly things on my wish list.

I KNOW. That’s advice that I’ve actually seen on the internet, and I think “does not immediately cause harm or concern” such a low standard. I wondered, “what the fuck even IS jelly?” and ended up finding 374598347594835 sex bloggers telling me the truth about toxic toys.

The truth is that even if something isn’t immediately apparently wrong, porous toys harbor bacteria, yeast, and mildew over time. And if that wasn’t gross enough, toxic toys leech oil and plastic softener. Yep. 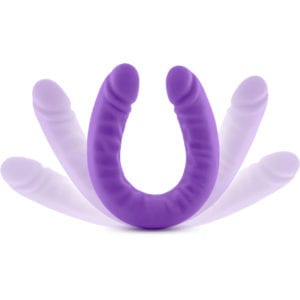 What I’d recommend instead:

AND it’s thick AF (1.75″ diameter) to clench around intensely when I come, but with a forgiving outer layer. It’s one of many affordable options from Blush for someone looking to level up in size. I was already pretty comfortable with penetration by the time I used sex toys, so this would have been fine for me.

There are plenty of more average-sized, non-vibrating options to choose from, for those who are relatively new to penetration.

Some of these products were sent to me in exchange for my honest and freely-given opinion. As well, I use affiliate links throughout this post. They bring me a commission at no extra cost to you and help keep this website running! You can find a huge selection of other body-safe toys at SheVibe.