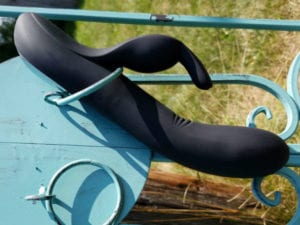 When it comes to sex toys, I’m always starry-eyed and swayed easily by the new and novel. Maybe to a fault.

Could this be an affordable and better alternative to the $150 LELO Mona Wave? I mean, it wouldn’t take much to accomplish that.

Seriously, what the fuck, LELO?

The Mona Wave‘s bullshit-boastful campaign (“The first!” To “truly” massage the G-spot! “Takes you to the limits of pleasure!”) set it up for failure— and the Mona Wave was still a disappointment.

In all fairness, an insertable sex toy flexing up and down isn’t a poor concept. But the Mona Wave’s execution was half-assed and overpriced. If it moved faster and cost less, it would be on to something. 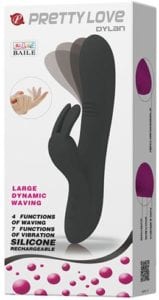 While I didn’t know much about Pretty Love, I figured “move faster” was a small hurdle for them to jump. And also, they’re part of Vibrant’s curated collection— I highly respect Vibrant as a shop, and I trust that they have wholesome reasons for stocking Pretty Love sex toys.

Indeed, even though my gimmick meter beeped, I’m not mad about trying the Dylan. The shaft’s vibrations are acceptable, the control panel is intuitive, and the “come hither” bending is quite useful. But not just for the reason you think.

Choose your level of curvature 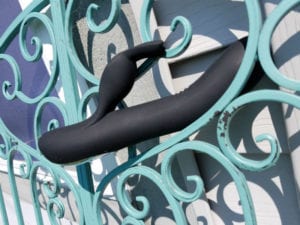 I appreciate that I can “freeze” the Pretty Love Dylan‘s position while its shaft bends. And as a result, I can have a moderate G-spot angle, a shallow A-spot curve, or anything in-between. 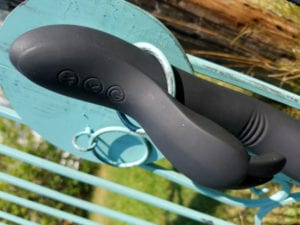 To turn the Pretty Love Dylan on, press the top button. It’s not going to start the vibration or waving motion right away, though. Both sets of functions are independently controlled. Press on the other buttons to cycle through the functions: 3 vibration speeds, 4 vibration patterns, and 4 settings for the waving.

How are the vibrations?

The shaft’s vibrations are buzzy, but I think the price is fitting. They have enough strength to get me off clitorally. At worst, the highest speed is a sometimes-irritating pitch, but the amount of power isn’t a concern for me. 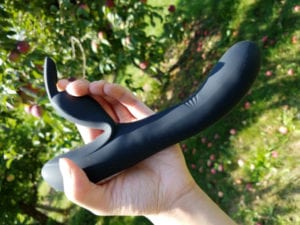 That clit arm, though? 100% useless. The best thing about the external stimulator that it’s so flexible that I can push out-of-the-way and not use it at all. It lines up with my clit fine but is too flexible to apply pressure in any meaningful way while thrusting.

And even if I press the clit arm, the vibrations are still pitiful. It’s whatever, because I usually hate rabbits and have only ever liked two rabbits‘ clit arms.

I’d just rather they had omitted the external stimulator. The makers could have instead invested the clit arm’s funds in better shaft motors. Notably, a faster “come hither” would take the Dylan from “meh” to “above and beyond for the price.”

It feels pleasant. Not amazing. Just different and good. It does add something to the experience, but it’s not fast enough to get me off without adding some hand-thrusting.

In a nutshell: at its fastest, it’s marginally quicker than the Mona Wave. The robotic sound makes it seem more powerful, but seeing fingers bend at the same speed makes it obvious how slow it is. Allow Epiphora and her friends to demonstrate in this video.

Yeah. After that video, there’s not much left to say. 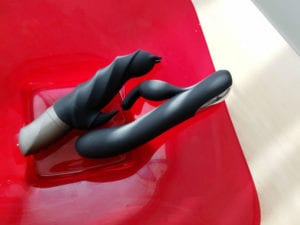 If you’re looking for an affordable alternative to the LELO Mona Wave, the Pretty Love Dylan is excellent for that. It moves at about the same speed and costs a whopping $90 less. As it should.

I’d recommend the Dylan for:

I would not recommend the Dylan for:

Where to get a Pretty Love Dylan