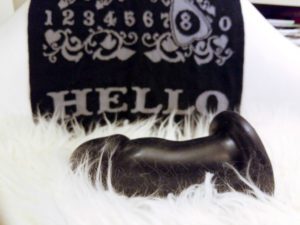 The single-density Vixen Creations Randy is my toy of choice for my forced orgasm torture kink. It’s the most intense toy I’ve ever tried. My blog might be conspicuously absent of bondage, impact implements, butt stuff, and Daddy Doms, but I’m no vanilla. The Randy is my personal, penetrative analog of being strapped to a Hitachi and forced to orgasm uncontrollably as torture.

You can get the dual-density version for a more luxurious price tag ($100 vs. $65), but I don’t think I would have liked that one’s squishy outer layer more. Not when the single-density Randy’s firmness better suits what I’m looking for: 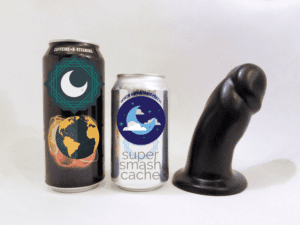 Size comparison to soda cans. The logos are covered for legal reasons.

Indeed, like with other big and rigid toys I’ve tried, good water-based lube is a must for me. There’s some urethral irritation when pushing it in. Thus, I try to keep the pressure on the back wall instead of the front at first. I have to be deliberate about my breathing to relax and stretch. Once it’s past my urethra and pubic bone, the discomfort is pretty much over; I can get to the good stuff.

Comparison to other toys

Now, of course, it isn’t a pinpointed G-spot-assailing missile like the njoy Pure Wand or the Jopen Comet Wand. The Pure Wand can give me the “orgasm torture” feeling, but its grinding up against my pubic bone gets straight up irritating. I rarely use it past the orgasm or two. The heftier njoy Eleven, meanwhile, is more intense than the Pure Wand, but over a broader area and not just for G-spot pressure. 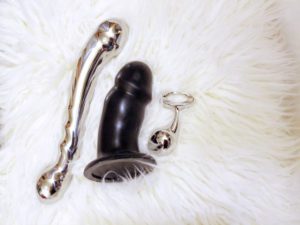 Similarly, the Vixen Creations Randy also applies pressure over a larger area. However, I wouldn’t say there’s less pressure to my G-spot than the Pure Wand. Between my vaginal walls, the overall girth stretches, and with the slightest tilt, the curved shaft and exaggerated head don’t have much room to apply pressure anywhere else but my G-spot, especially when I clench. And that’s a beautiful thing; the Randy gives me more overall stretch and more G-spot intensity without the pubic bone grinding of a rigid, G-spot-specific assailant’s head.

My verdict on the Vixen Creations Randy 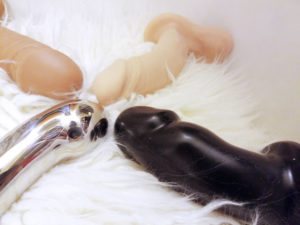 I recommend the single-density Vixen Creations Randy to size royalty, especially those looking to level up from 2″ to 2.25″ diameter. I don’t know if forced orgasm torture is one of your kinks, but after trying the Vixen Randy, you might discover that you’re into it, too.