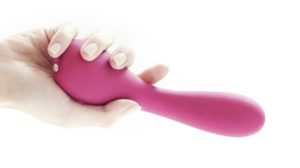 The Je Joue Uma has many hallmarks of a versatile toy. It has a bulging, gentle curve that can hit internal erogenous zones but won’t snag on my pubic bone. At 1 3/8″, it’s filling but comfortable for everyday use. It has range and rumble: 6 speeds and 6 patterns, including that elusive low-frequency purr.

On paper, the Je Joue Uma looks like everything I’m looking for. In practice, it initially confused me into questioning what I like. My overall sentiment about this toy is “It takes getting used to.”

It’s impressive internally, thanks to the deep, rumbling vibrations, but the shape isn’t ideal for my G-spot. I wouldn’t recommend it as a first sex toy at all– more like a third or fourth after you’ve already played with other G-spot toys and vibrators, and know what your G-spot and clit like.

The Je Joue Uma‘s vibrations are very rumbly. Like the We-Vibe Tango, it has some “jump” when set against a hard surface; it sounds less like buzzing and more like very fast tapping. Unlike the Tango’s smooth vibrations, though, the Uma has more of a throbbing quality to it.

The vibrations frustrated and confused me at first. Uma is rumbly and low, but for clitoral use the first few times, it took me longer to orgasm and less intensely so than with comparatively surface-level vibes. I nevertheless kept using it. Over time, the time discrepancy diminished and my body became acclimated to the Je Joue Uma’s vibrations.

The orgasms got better and didn’t take as long anymore, but are still enjoyably different. And best of all, my orgasms with the Uma last way longer.

It was befuddling to me, a supposed clitoral lightweight, that a rumblier vibe would take me longer to orgasm. That is until I read Emmeline Peaches’ reviews of Je Joue’s Uma and Mimi. In her review of the Je Joue Uma, Emmeline wrote:

They have the same flittering, pulsating rhythm to them which I’ve never felt outside of the Je Joue line. These vibrations seem to combine deep, rolling pulsations (which have a rumbly feel to them) with gentler, rapid-fire quivers (which have a bit more buzz to them),

And in her Je Joue Mimi review, she elaborated:

Because these vibrations are so different to what I’m used to it can take longer to orgasm with the Mimi Soft but I definitely enjoy the journey. It’s like my clit is getting pampered and teased by the quivering chorus of the Mimi Soft’s vibrations.

These words pretty much echo what I thought at first. So there you have it: Je Joue has a signature of vibration that might not resonate with everyone. It might poorly resonate with your clit, or your clit might like the uniqueness. I was somewhere in between, where I came to love it over time.

Despite my feelings about the Uma’s external sensation, the throbbing pulselike quality is what makes this toy shine for internal use. The low pitch and high rumble are, of course, remarkable on the lower steady settings. When combined with the patterns, it further exaggerates the throbbing sensation. The downside: I stay away from the faster settings because they do get buzzy and pinchy.

Where the shape makes it harder to aim at my G-spot, the vibrations’ amplitude makes up for the lack of precision. 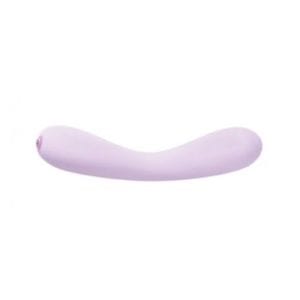 To find my G-spot with the Uma without vibrations, I have to pull and let the head drag against my front wall on the way out. It’s more of a stationary inching toy than a thrusting one. It was counterintuitive to me, took more effort, and demanded that I undo what I thought I knew about using G-spot toys.

It’s okay for my anterior fornix, but I’m used to G-spot toys with more voluptuously rounded and bulbous heads that lock into place behind my pubic bone. Such shapes immediately press into the right spot. On the other end of the spectrum, gently curved G-spot toys without significant girth changes are also easy to thrust.

The Uma’s bulging head is an awkward in-between where its petite girth takes more effort to aim. After the bulge’s max circumference, the neck slopes and tapers to a very narrow 3/4 of an inch. As such, my vagina tends to “suck” in the toy so that the shallowest, tightest section of my vagina can wrap around the narrowest part of the neck. The girthiest part then rests way deeper in my vagina than where my G-spot is.

For comparison, with the Laid D1, the relatively uniform girth lends itself better to thrusting, while the comparatively squared head puts more pressure closer to my pubic bone. If I try to tilt the Uma back and thrust, the force gets aimed too far past my pubic bone to do anything pleasurable.

I see people recommending this toy as a versatile vibe and being ideal for beginners, and I can’t say I agree. The Je Joue Uma is definitely for someone who is already BFFs with their G-spot, has tried out other vibes, and wants something new and unique to invest in.

Previously, it was usually the shape that made me fall in love with other toys. I didn’t see sense in paying extra for a luxury motor until trying the Je Joue Uma. The vibrations make the penetration sensation that much richer; Je Joue‘s unique, fluttery vibrations successfully converted me.