The LuzArte Thrust is a showstopping art piece!

Oh, and did I mention that you can fill LuzArte’s translucent silicone toys with practically anything you want? Mine has tiny pom-poms in it for a striking rainbow polka dot effect, but you can get glitter, bits of lavender, confetti, and the like. 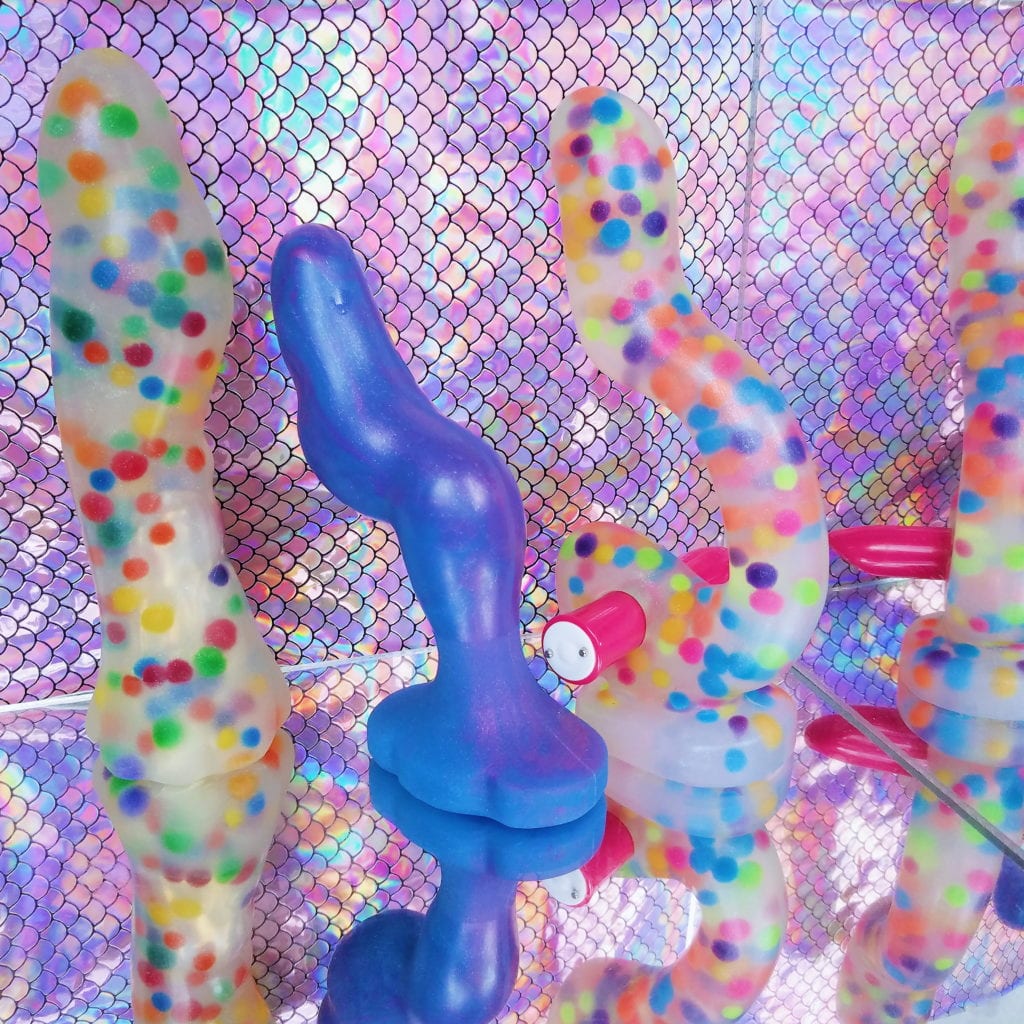 Since the decorations affect the silicone’s stability, there are some limitations, but feel free to request small things. If you can’t resist adding something bigger, consider a custom Jollet instead. Just check out LuzArte’s selection and email the maker about what you had in mind.

(If you do that, don’t forget to use my coupon code, SUPERSMASHCACHE, for 30% off all LuzArte Products!)

Let’s start with the LuzArte Thrust‘s most conspicuous features, from top to bottom: 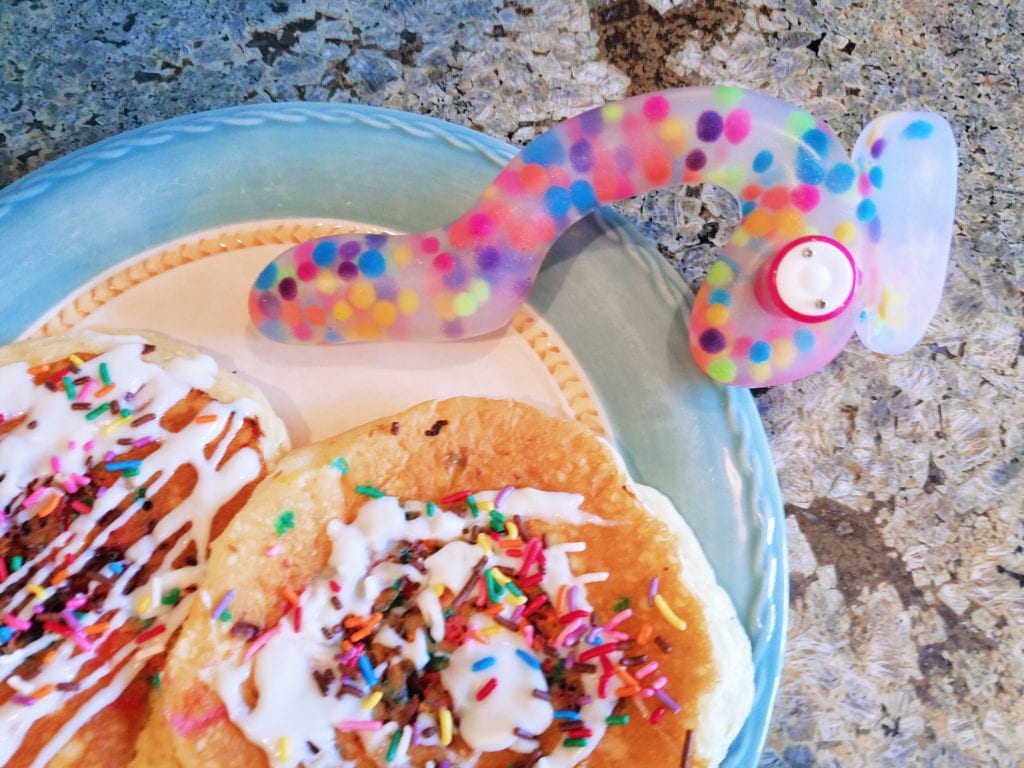 Like all of LuzArte’s toys, the Thrust’s silicone is dense; no squish here! But since the toy is relatively thin, it’s quite springy, allowing it to accommodate a wide range of clit-vag gaps — if you’re using it as a dual stimulator.

Also worth noting is that it’s not completely round at the bottom of the shaft. If you’re harnessing the LuzArte Thrust, consider a silicone O-ring for some flexibility, instead of metal. 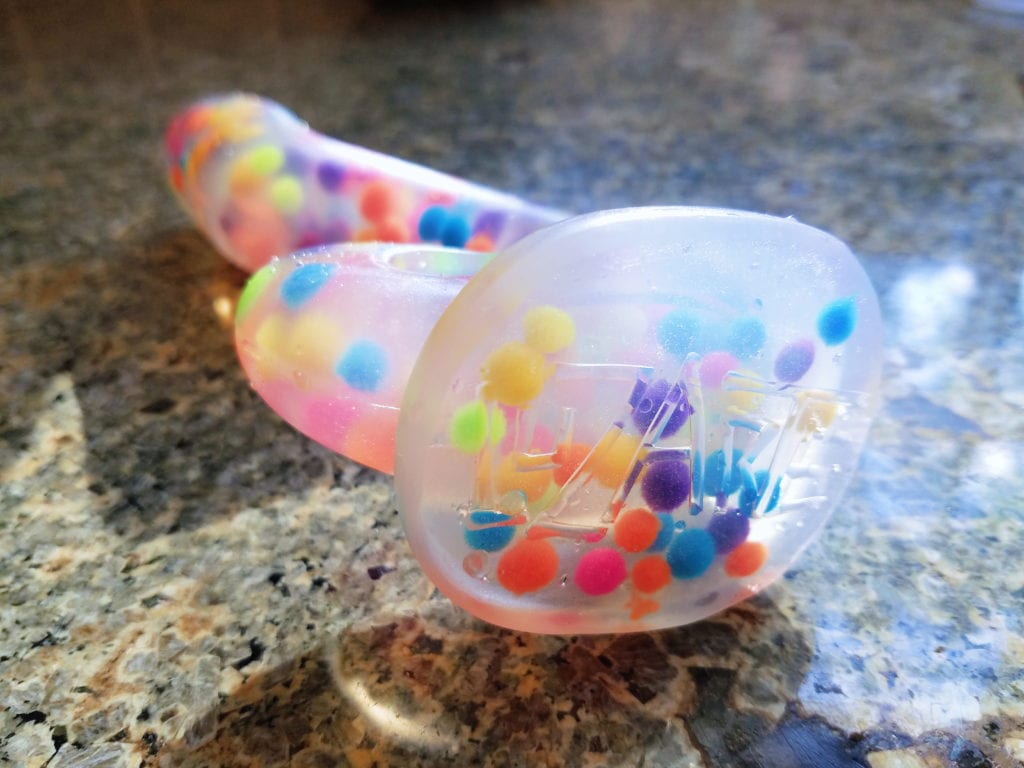 Overall, it’s an exotic shape that has (understandably) made my Twitter followers wonder, “But what is that thing?”

If you’re using the LuzArte Thrust vaginally, the hump can press against your G-spot while the tip slides against behind your cervix.

Consider the LuzArte Thrust a bendier Jollet or a longer Luna!

How the LuzArte Thrust feels in use

What I enjoyed about the LuzArte Thrust

I don’t often use dual stimulators, but I love it when they can stimulate my cervix and clitoris at the same time! Kudos to LuzArte for making something that does that. 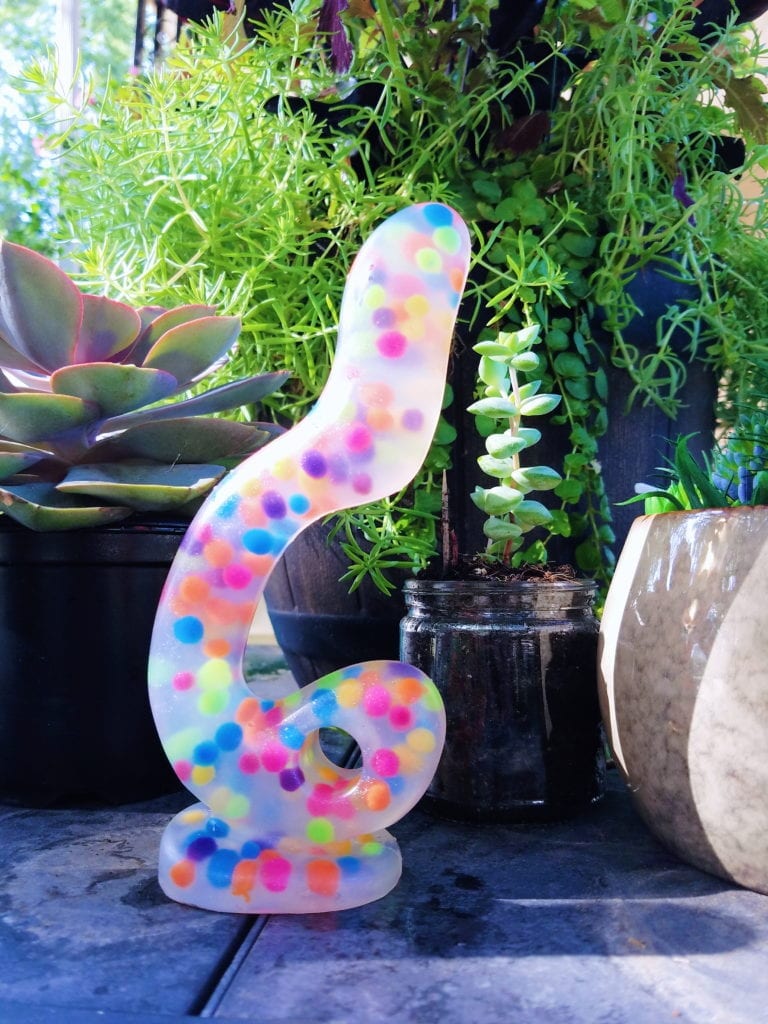 It’s hard to go wrong with the powerful We-Vibe Tango in a bullet cavity — and it’s even better when I can feel the rumble against my external bits! As with most “rabbit” vibes, though, the LuzArte Thrust is best for small, grinding motions.

For one, many of LuzArte’s toys are designed for stationary stimulation, anyway, so squeezing around the firm silicone is still arousing AF! Just be aware that the external bump might not stay in contact with the clitoris if you’re making long thrusts.

But also, the LuzArte Thrust is more yielding than the Jollet. Aiming the Thrust in front of or behind the cervix is doable, but not nearly as precise. If you’re sensitive there (in a bad way), keep that in mind.

In a sense, you could also consider the LuzArte Thrust a triple stimulator when inserted vaginally. Used anally, it certainly has the potential for simultaneous prostate and external massage. As always with all-in-one toys, though, it heavily depends on your anatomy. Don’t be afraid to measure. 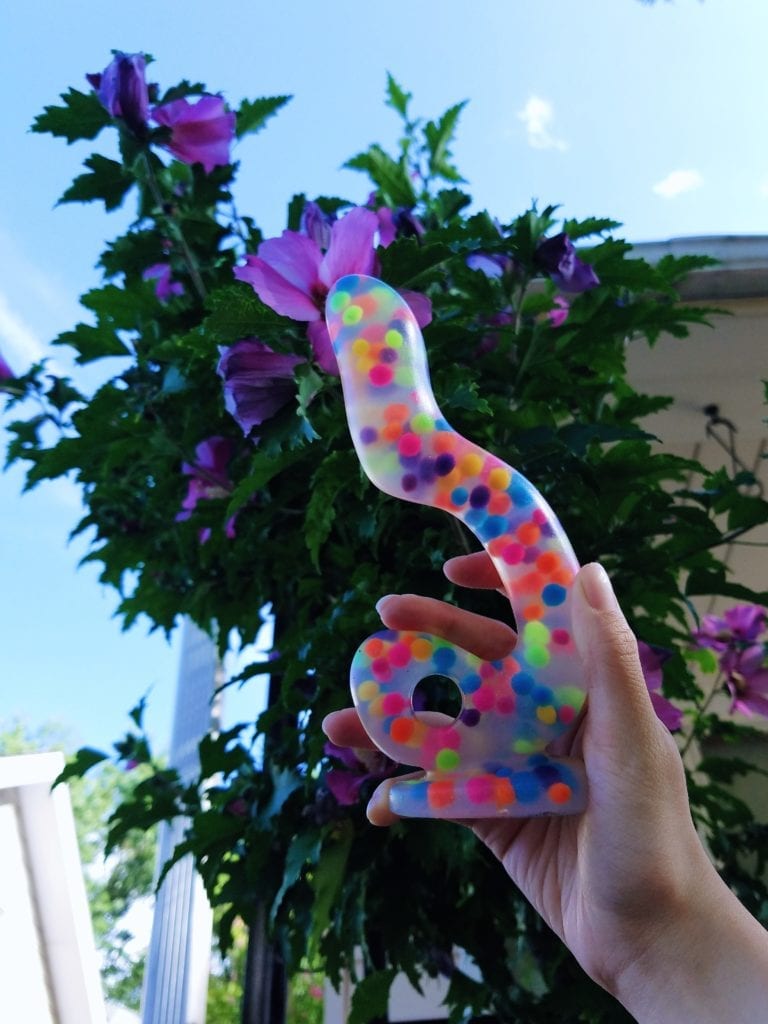 My verdict on the LuzArte Thrust

The most adventurous players can appreciate everything the LuzArte Thrust offers. Its flexibility-to-firmness ratio isn’t 100% ideal for me — I’d like a bit more stability — but it’s close:

For those who just want something G-spotty to clench around, the LuzArte Thrust is an enticingly less girthy alternative to the Jollet and Jollie. And it’s just as beautiful! Ultimately, choosing between a Thrust and the others comes down to whether you want a Jack of All Trades or a master of one.

Where to shop LuzArte Products

Since these toys are made in small batches, what’s in stock at each retailer varies.

Here’s a summary of what I found last time I checked: 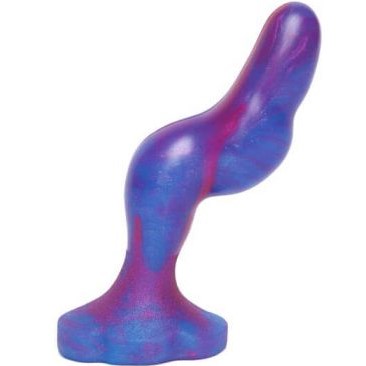 Use my coupon code for 10% off sitewide at Spectrum Boutique: SUPERSMASH10 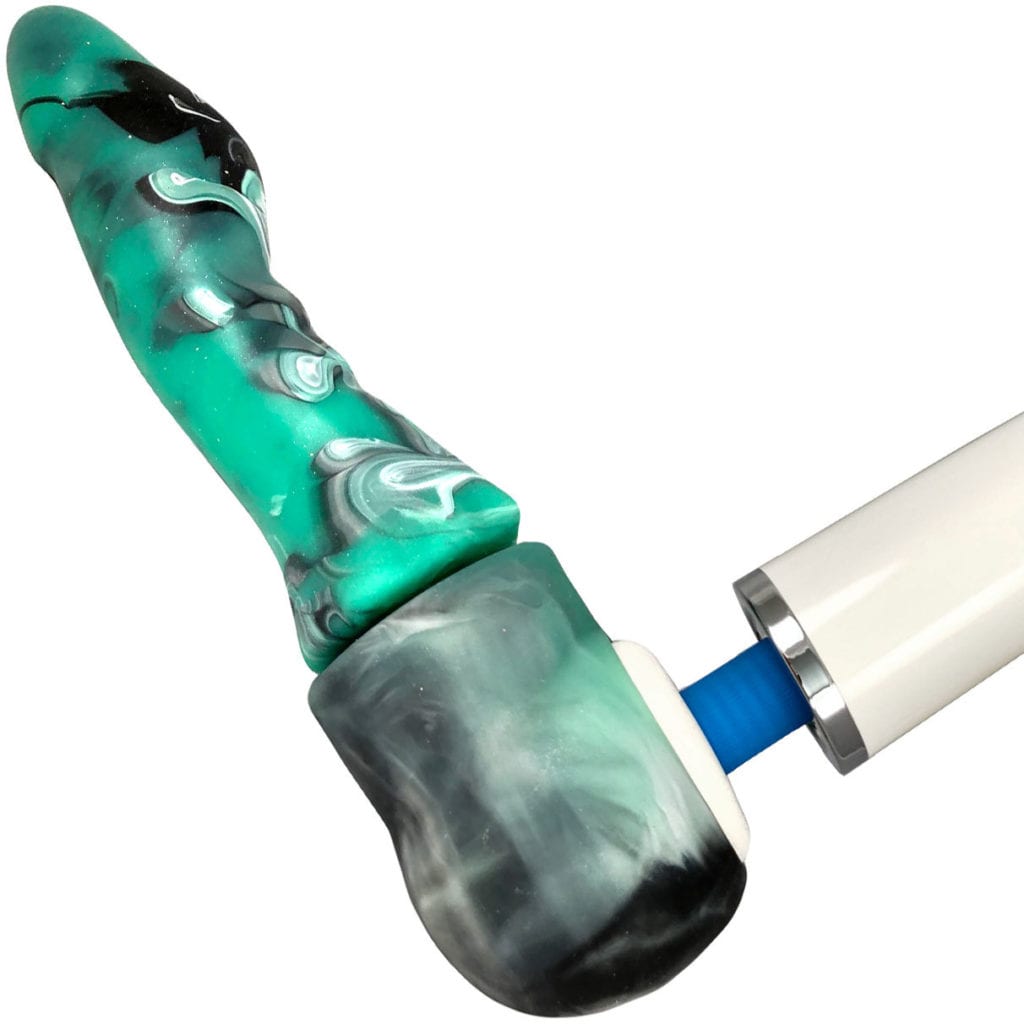 SheVibe is home to bountiful other superhero-inspired exclusives as well, like the Uberrime A-Spot Avenger and Aqua-King!

Or get something directly from LuzArte!

Their selection includes a huuuge assortment of Jollets…

…along with the Jollie, Luna, Bubbles, Jack, and of course, Thrust.

Shop LuzArte’s unapologetically colorful selection now! Take 30% off all LuzArte Products with my coupon code, SUPERSMASHCACHE — that way, Luz knows I sent you. <3