It’s no mystery that I love VixSkin. My rave review of Vixen Creations’ VixSkin Johnny is the most popular post on my blog. The firm inner core and squishy silicone outer layer not only make it incredibly realistic but also gentle and body-safe.

Vixskin Outlaw next to Vixskin Johnny next to Tantus Uncut #2

And gosh, I’m happy with that decision. When my VixSkin Outlaw first arrived, I was terrified letting it sink in just HOW big it is. I had taken the big end of the BMS Factory Swan Wand, which had a 2″ thick hump, but was relatively narrow beyond that. Outlaw is 2″ thick aaaallllll the way down. But it’s a very gentle 2″, in part because it’s squishy and in part because it’s straight-shafted.

I was, in all honesty, surprised at how quickly it popped in after using Johnny as a warm-up toy. I hadn’t even re-applied lube! Johnny yields a little more resistance and irritation when I insert the tip because it’s bent and has an exaggerated head. Outlaw goes in smoothly, despite being bulkier.

Johnny’s curve means there’s a lot of pressure on my cervix and the front wall of my vagina (my A-spot). The curve has more potential to be painful during certain times of the month. Outlaw also delivers a lot of A-spot stimulation, but the pressure is more uniformly spread, and there’s more pressure on the wall behind my cervix than the front. It’s less targeted and more general, but still very much intense, in a different way. 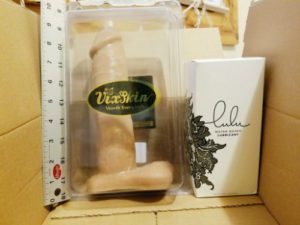 But how are the orgasms?

The bigger girth all the way down makes me come harder. There’s more resistance to clench around to induce each orgasm, and once I get the ball rolling, the clenching is enough to perpetuate it. Clench, come, repeat. Back-to-back orgasms for way longer than I’ve experienced with Johnny, and without thrusting. WITHOUT. THRUSTING. The orgasms from Johnny are still rave-worthy, but I generally push it all the way in, hold it there while clenching, and give 2 or 3 thrusts when my plateau starts going down. I stay on the plateau of heaven for longer with the Outlaw, with much less effort.