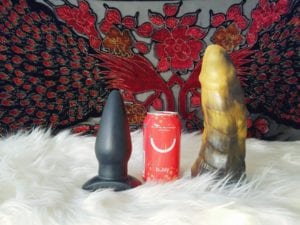 Because, once my libido was satiated and my fingernails were done threatening to rip apart everything around me, I felt humanly urges of all other sorts. I was hungry AF, ready for water, and one with the bed.

The fact that I used it first thing in the morning before writing this was probably a factor. Regardless, don’t use the Cybersaur when there’s no food or comfortable furniture around. Or pillows to smother the screaming, for that matter. 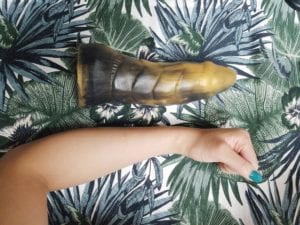 I adopted the Frisky Beast Cybersaur (a.k.a. Mechanical Animal 3.0) from Lunabelle of Ninja Sexology while I was at Woodhull. This particular Cybersaur’s color isn’t exactly the most photogenic, but its length and tapered girth called out to me: 10 inches long, with a pointy tip sloping into a 9″ circumference.

How the Cybersaur feels in use

“Hold up,” some of you are thinking, “The Cybersaur’s tip is quite centered, so wouldn’t that hurt your cervix?” 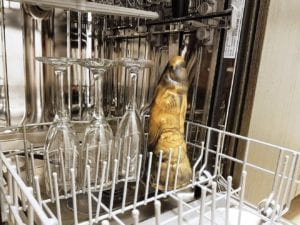 While I could easily fold my standing Cybersaur’s shaft in half by pushing it, the Ringo only bends at the slender tip. To be frank, I can barely sense the Cybersaur’s fantasy textures because of the squish. Plus, the intensity of the deep stretching masks anything I feel on the surface.

Luckily, Frisky Beast’s / Twin Tail Creations’ flexibility and gentle curve allow the Cybersaur to easily bend out of my cervix’s way. It doesn’t hit my cervix directly but slides behind it. That’s where the magic happens.

Using the Frisky Beast Cybersaur is a stretch. Painfully and literally so. But in about two minutes of gently thrusting, my vagina happily accepts it due to the tapering. And in two more minutes, my boyfriend hands me a pillow to scream into. The walls are thin here.

Cybersaur vs. other fat toys in my collection 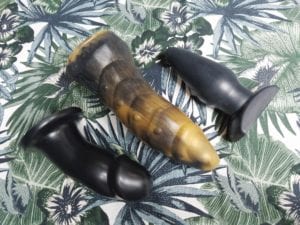 Unlike when using the Randy, I’m not so overwhelmed that I sound like I’m giving birth. The Cybersaur is much squishier and more yielding when I clench around it. But it gives my pelvic floor muscles something to play with: a stretch that’s delightful to squeeze. To feel the changes in pressure as I contract.

The sloped girth also makes it more fun to use long thrusts with, while the Randy is more for stationary jiggling. I can always comfortably take just the Cybersaur’s tip if I please. Randy’s bluntness is more abrasive to my urethra and feels comparatively all-or-nothing.

And there’s mild cervix stimulation with the Cybersaur, but not specially targeted like with the Uberrime Night King. There’s a lot more internal clitoral pressure, and just a little pressure against my cervix. The orgasm has the sheer intensity of using a girthy toy, but the soft and fluttery heart-eyes-emoji feeling of deep penetration. It’s like a potent cocktail of mostly dopamine and some oxytocin. 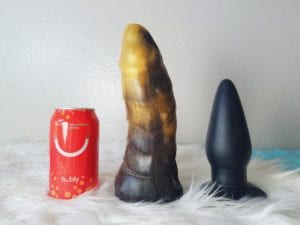 Where to get the Cybersaur (or other similar toys) 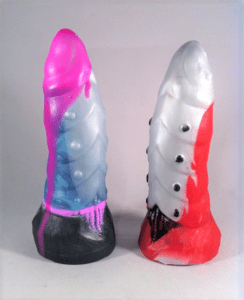 Twin Tail Creations now manages Frisky Beast. All of their products are made of hand-poured silicone, so the Cybersaur isn’t always available. In fact, it’s archived and one of the harder-to-find products.

According to the Twin Tail Creations website, products in the Frisky Beast archives are “not custom orderable, but we’ll periodically drop readymade artisan creations in the FBC inventory, for you to grab.” I suggest nudging them and letting them know that the Cybersaur is in demand. Keep your eyes peeled.

In the meantime, if your preferences are similar to mine, consider the Bad Dragon Pretzal or Winston’s Tail in medium or large. (Shown below in “signature” color schemes.) They’re not the same as the Cybersaur but also offer tapered and squishy girth.