What makes the Tantus Splash’s different?

It possesses an intense combination of heavy texture, chunky 1.75″ girth, and firmness. Contrasting with the matte shaft, the drips have a smooth finish. The appeal is the thick, structural texture, rather than a fine surface texture. However, unlike with the also deeply ridged Echo, the Splash’s drips are pronounced but positioned comfortably. There’s enough spacing among the drips that the Splash can bottom me out without pinching my urethral sponge against my pubic bone. 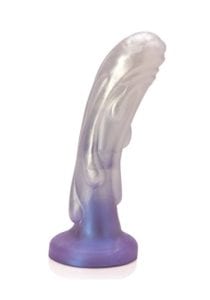 Instead, the drips press up against my G-spot and internal clitoris just past the pubic bone, while the friction of the silicone pulls against my urethral sponge with each “out” stroke. The dimensionality of the drips is just right for that. It’s meant for slightly twisting back and forth, jiggling in place with tiny thrusts, and clenching around to appreciate all 360 degrees of its glory.

The shape and firmness do, however, excel at perineal sponge stimulation. You can turn the toy to face the curve against the back vaginal wall, indirectly pressing against the anus. Straighter, more flexible toys don’t do much in that department. Drastically curved or bulbous toys when used that way vaguely feel like I have to poo. The shallow curve and lack of give with the Tantus Magma is just right for my perineal sponge; that’s not something I can say for the other toys in my collection.

In the future, I’d love to see Tantus release more deep-textured toys with wider spacing, rounded contours, and more smooth space on the bottom of the shaft.